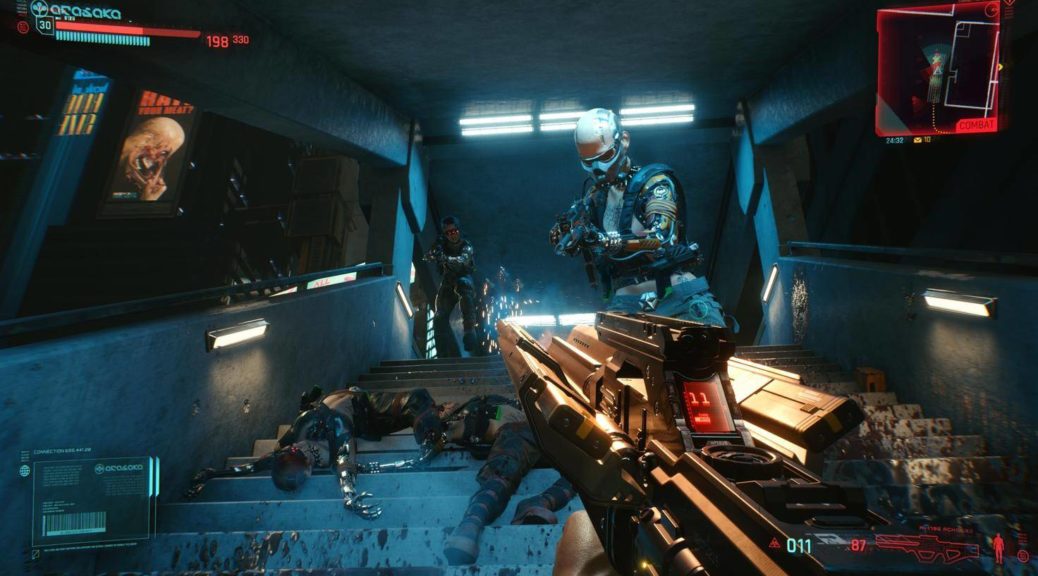 The CD Projekt Red team has already let me play "Cyberpunk 2077", despite the new postponement. The new role-playing game from "The Witcher 3" creators is one of the games I'm most looking forward to this year – so I didn't get asked twice. In this preview you can read what makes the sci-fi game different, what I like and dislike about it.

Neon, metal and the dirt of the megacity: "Cyberpunk 2077" takes me into a dark vision of the future, which is constantly fluctuating between brightly colored Disneyland and brutal dystopia. I'm a lucky knight in Night City, a bright juggernaut in the western United States in the near future. My character V wants to be more than a game ball from unscrupulous corporate managers and powerful street dealers and is looking for its way up from the street.

Role play instead of novel – that works

The most striking difference to "The Witcher" is that I myself shape my character and her path through the story of "Cyberpunk 2077". CD Projekt Red's award-winning fantasy series was based on Andrzej Sapkowski's novel. Her hero, Geralt von Riva, was given as a finished character. "Cyberpunk 2077", on the other hand, was created on the basis of a pen-and-paper role-playing game. A role-playing game "with note and pen" grants almost infinite freedom, since it only takes place in the imagination of players and game managers. Level designer Miles Tost told me that "Cyberpunk 2077" should capture exactly this freedom, and you can feel it in the game.

The game provides many options for this: The five main properties of strength, reflexes, intelligence, technology and coolness are increased with points and each have several subordinate skill trees, which I also level up. When I use my skills, I also unlock perks – if I mainly use swords, for example, this will give me additional bonuses over time.

From cyber soldiers to sci-fi influencers, "Cyberpunk 2077" leaves many options.

The versatile possibilities to shape my character externally and in his abilities seem almost confusing at first glance, but they give me a lot of freedom. For players who like to work on their own build for hours, these are wonderful prospects. Level designer Tost hopes that "Cyberpunk 2077" will "become a very intimate story that seems really personalized" through these options.

Despite choosing a Lifepath at the start of the game, i.e. a biography, "Cyberpunk 2077" relies on a classless character system. So I am not limited by the choice between Nomad, Corpo or Street Kid. In return, every path of my life opens up a different prologue and a wide variety of dialog trees, which appeared pronounced in the preview. As a corpo my V could get lost in a conversation with a group manager until even my NPC counterpart visibly lost the desire to chat.

Not everything in there yet

I was not able to try out the crafting system and the ability to mod equipment and weapons in my preview version.

The versatile game system promotes your own playing style. I played the preview with the controller and immediately felt the need to concentrate on effective melee attacks. With more precision using the mouse and keyboard, I would probably have used guns. In addition, the combat system always gives me the choice of whether to go into a situation aggressively or to try my luck with sneak tactics.

This is where the hacking of the electronic environment comes into play, the counterpart to magic in fantasy settings. This can be used to manipulate surveillance cameras, smartphones or robot guns, for example. Unfortunately, I see this mechanism as the weak point of "Cyberpunk 2077" – it is solved with a mini-game that could be annoying after many hours of play. After all, there is always the possibility to omit this mechanism completely and use brute force instead. Too bad, the game does not currently manage to implement hacking more creatively than "Watchdogs" and Co.

Are Braindance and Hacking the Gameplay Troubled Children?

I am similarly skeptical about the gameplay element "Braindance", recorded memories, in which I have to look for clues in the game. In these sections of the game, I can move the camera freely through the scenery, rewind and rewind over a timeline and switch between different views that highlight sound or heat sources, for example. This is strongly reminiscent of "Detroit: Become Human" and offered a bit of variety in the preview – but can also become a tedious task if you get stuck looking for a certain detail.

But there is still time. This is mainly necessary to eradicate bugs, some of which were in the preview build. The new postponement does not seem to be due to the working conditions in times of social distancing: According to Tost, internal review processes feel significantly different if the team is not in one room. But thanks to the creative use of tools such as Parsec, which allows the streaming of a game session and the virtual transfer of the controller, CD Projekt Red has adapted well to the unusual circumstances.

High-gloss neon: "Cyberpunk 2077" looks great, but a few bugs have yet to be fixed.

"We were lucky in the accident," says Tost. "As terrible as this pandemic is, it hits us in a project phase in which most of the designs have already been completed and the work left over, which means 'sit down and do'. Fix bugs and such – where you don't have a lot of discussion must lead to elaborate details because everything has already happened. "

By the way: As expected, there was nothing in the "Cyberpunk 2077" preview of the much-requested multiplayer mode. It should be submitted later. In the prologue that I played, the combat tutorials were in the form of "virtual reality" sections – I can well imagine that the multiplayer will start here later. According to Tost, the focus is initially clearly on the single player, there should be no "mixing or even watering down" through the multiplayer.

Beautiful, large and versatile: the preview makes you want more

"Cyberpunk 2077" already looks great, the PC version is not stingy with RTX light effects like shadows with ray tracing. What I could already see from the Open World looks very lively. Night City is big, lively and full of dialogues, figures and details to discover. I'm excited to see what the finished game looks like on a PS4 or Xbox One. From what I've seen, the PC as a gaming device would be my first choice – or a NextGen console.

Not always bleak: Above all, Night City is versatile.

If you want an action role-playing game with a lot of space for your very own story, you can look forward to "Cyberpunk 2077". Did the preview personally convince me as a fan of the template ? Yes, because the atmosphere is right and the game is full of Easter eggs that I want to discover. The hacker gameplay is not my thing. But hey, my V will be a cannon-fighter, invincible in full contact and an ace at the wheel of her cyber sports car.

You can read the official book about the game and of course the game   Pre-order now from SATURN .