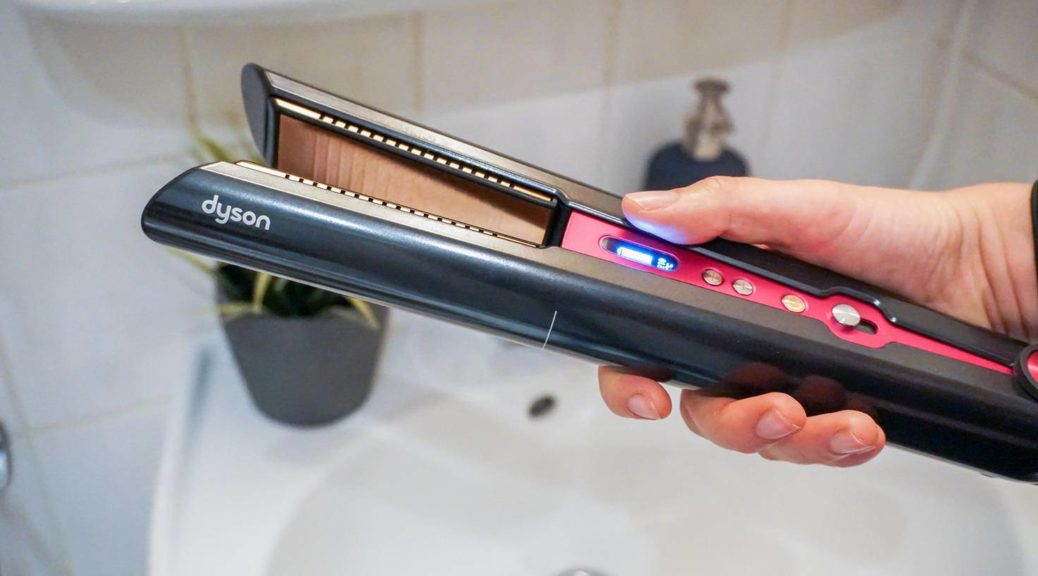 Dyson doesn't just develop air purifiers and vacuum cleaners. With its hair dryer and air wrap, the company entered the hair styling market some time ago. Now Dyson is adding a straightener: the Dyson Corrale. The straightening iron promises up to 50 percent less heat damage from special heating plates. I tried it out.

Taming the flowing mane of hair with the straightening iron is usually a lot of work. Strand by strand, the hair is enclosed with high heat: This not only costs time, but also at the expense of the hair structure. The product developers of the British technology company Dyson set themselves the goal to counteract this problem seven years ago. The result is the Dyson Corrale, which works with flexible heating plates.

This is the new Dyson Corrale in the classic coloring of Dyson's hair styling products.

But the hair straightener carries a proud price: 500 euros are incurred for the supposedly sophisticated product. In fact, the Dyson Corrale is special.

The Dyson Corrale has absolute eye-catcher potential in the bathroom or at the dressing table. The manufacturer relies on an exceptional design – as with almost all of its products. The Corrale also relies on the coloring of the other hair styling devices from Dyson: It is mostly in dark gray with pink color accents.

The slider opens the straightener and releases the buttons and the display.

The straightening iron can be locked and opened using a sliding button. Only then does the beautiful device reveal its control area – consisting of three buttons – and a small screen. This gimmick upgrades the straightener. However, the Corrale is a heavyweight compared to my Braun flat iron.

But the Dyson is better in the hand. I can precisely navigate the straightener and pull it over my hair. This is mainly due to the fact that it does not need a cable. He brings his own charging station to which you can connect the included power cable – but it can also be magnetically connected to the device itself. This is especially helpful if you run out of power while smoothing. The battery operation ensures that you can move the straightening iron around the head comfortably and undisturbed.

With the associated charging station, the Dyson Corrale is a real eye-catcher.

The technology in the Dyson Corrale

If the temperature of conventional hair straighteners is reduced, this leads to less hair damage, but the styling result is also not so beautiful in the end. Dyson advertises the Corrale with flexible heating plates that enclose the hair and are supposed to deliver a good styling result despite the low temperature.

They consist of a manganese-copper alloy and were equipped with 15 micro joints. As a result, the strands should not slide outwards when smoothing, but should remain where they should be from top to toe. The heat can be distributed evenly over the entire strand and multiple smoothing is no longer necessary. In addition, the device should ensure 50 percent less hair breakage, frizz and flying hair.

The heating plates are provided with micro joints that enclose the hair.

The straightener regulates the temperature of the heating plates 100 times per second. So the set temperature is said to never be exceeded. Dyson takes the technology from its cordless vacuum cleaners and integrates a heat output in the corrale, which should correspond to that of hair straighteners with cables.

The British thought of every little detail during development: The straightening iron also has a flight mode plug, which deactivates the contacts to the battery. Therefore, the Corrale can be carried in hand luggage. The scope of delivery includes a travel bag with a special flap for flight mode.

A special feature: the straightener even has a flight mode.

The straightener as a daily companion

Theoretically, the built-in technology in the Dyson Corrale is impressive. Fortunately, the hair straightener is also a convincing tool for hair styling in practice. Simply opening the flat iron with the sliding button feels special. Unfortunately, you can only choose between three heat settings: 165 degrees, 185 degrees or 210 degrees. I would have liked a setting around 120 degrees. The Corrale is then heated up in around 30 seconds and clearly indicates this with a tone.

You can see the current temperature setting of the straightening iron on the display.

Dyson states that strands of hair should not slip due to the special heating plates and this statement has actually been proven in the everyday test. Not a single strand fell out of the straightener during the straightening process and so I was able to transform my hair into a flowing curly head in no time – without having to rework several times. Especially when there is little time, the smoothing result is excellent: even thick areas are reliably smoothed out by the Corrale. However: after the styling, there was flying hair, which the manufacturer actually wants to avoid with the Corrale.

In everyday life, I became very fond of the wireless design of the Dyson Corrale. You can move freely in the bathroom as you pull through the hot plates, strand by strand. Especially if you want to turn curls with the straightener, this feature is worth its weight in gold. The Corrale remains active wirelessly for at least half an hour. This is how long a battery charge lasts at medium temperature. If the juice runs out, the straightener indicates by a beep. Then you plug in the cable and a little later you can continue. The device is fully charged again after about 70 minutes via the charging station.

Snap on and the power cord is magnetically docked at the end of the device.

How much can a straightener cost?

Dyson has packed some good ideas with the Corrale. Ease of use is the top priority for the straightener and this can be seen at all ends of the device. The fact that I can straighten, curl and style my hair wirelessly is a possibility that I will never want to miss again. Even the sometimes complex and repeated smoothing of individual strands makes the Corrale child's play.

Not only straight hair is possible. Here I twist my curly hair into my hair.

In my everyday test, I could not check whether the device actually reduces heat damage. This would require a longer and direct comparison of the strands to another flat iron.

The Dyson Corrale makes using a straightening iron easier overall, but so much technology comes at a price: at around 500 euros, it is anything but a bargain. I could imagine that the device will pay off for frequent smoother and professionals, but for the average user I find the price to be exaggerated.

Are you a smoothie and mane tamer? Then you will find the Dyson Corrale here at SATURN.