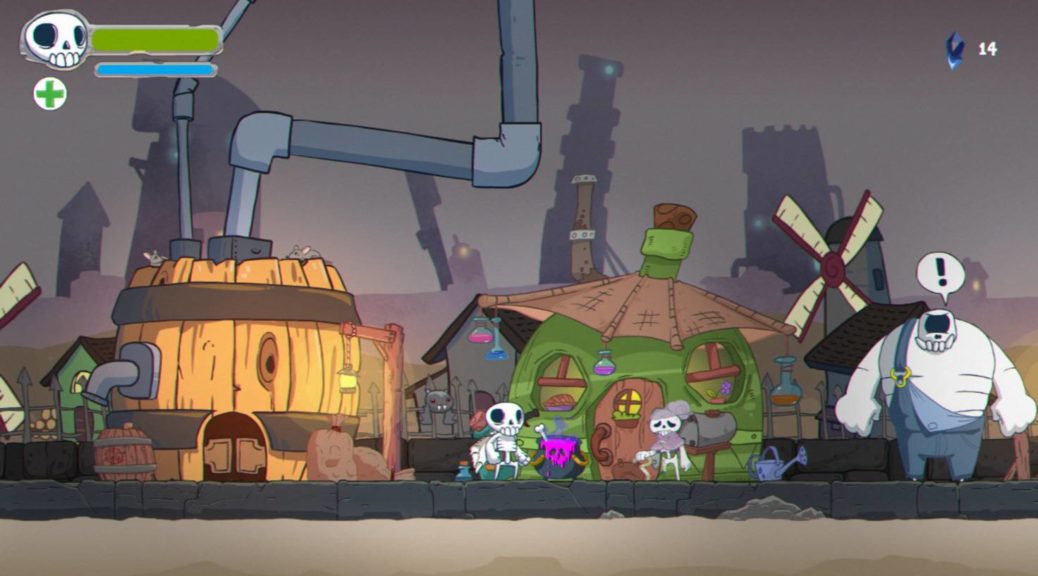 Konami recently released the indie game "Skelattack" without much notice. After the launch trailer, I had already prepared for Metroidvania in a comic look, but in fact the game is more of a platform. You can now find out whether the game convinced me.

Developer Ukuza was inspired by "Skelatack" from games like "Hollow Knight" and "Super Meat Boy". I noticed that immediately. The skeleton Skully is very reminiscent of the knight from "Hollow Knight" and can also learn other skills in the course. And the nasty spikes, which kill me at the slightest touch and lurk at almost every corner of the game, evoke beautiful and frustrating memories of "Super Meat Boy".

Unfortunately, "Skelattack" does not reach the class of its role models. The shortcomings in the gameplay are too big for that. That is a shame, because the graphics and soundtrack are convincing.

In "Skelattack" we slip into the role of the skully. It has recently "lived" in Aftervale, a city especially for the resurrected dead, demons and other mystical beings. Skully suffers from amnesia after his resurrection and can no longer remember his life as a person. A ritual is said to help him get back his memories. But before that happens, people attack Aftervale and kidnap the city's elders. Then Skully grabs his bone sword and, together with his bat friend Imber, tries to drive the intruders out of the dungeon and rescue the elders.

"Skelattack" is not the first game that shows the dungeon raids so popular in fantasy games from a monster perspective. I still find it refreshing to see people again as bad guys. The story itself may not be the most original, but the game scores with likeable main characters. The friendly taunts between Skully and Imber are a highlight of the game and very amusing. The dialogues with the other city residents are unfortunately less fun and are limited to the bare essentials.

The game world is really knorke.

Graphically, the game hits the same line as "Cuphead" and looks like a Saturday morning cartoon from the 90s. There are a lot of interesting monsters to discover in Aftervale, and the different worlds – including a sewer, a forest and a smithy in a volcano – are nicely animated and full of details.

The soundtrack of the game is also well done. The jazzy background music not only fits perfectly with the game world, but also calms the mind when Skully bites the grass again. At least I never felt the need to throw my controller on the wall after countless deaths.

Actually optimal conditions for a good game, if it weren't for the messed up gameplay …

"Skelattack" is another attempt to combine the genres platformer and Metroidvania. "Hollow Knight" has proven that this combination can create impressive games. However, the right mix is important. "Hollow Knight" is primarily a classic Metroidvania. Exploration and struggle take center stage, there is a lot to discover in the world, and the hero grows stronger as the adventure progresses. There are only a few platform passages in "Hollow Knight", but they are in exactly the right places and with a crisp level of difficulty that increases motivation.

"Skelattack" tries the opposite: the game is a platformer at heart and garnished with Metroidvania elements – but so inconsistent that it would have been better to do without them entirely. In my opinion, the game would work much better as a pure platform with a high level of difficulty. The parkour of dangerous spikes and traps is often just as fun as with "Super Meat Boy" and "Celeste". The deadly boring and irrelevant skirmishes with humans are a real fun damper.

If you hide the fights in "Skelattack", the game is already fun. Flying around with Imber is really fun.

"Out of the way! I don't have time for weaklings!"

The battles against the bosses are a little more demanding than those against the foot soldiers, but they don't really convince either.

There are only a handful of different types of opponents in the game, each with only one, very easily understandable attack pattern. If you are occasionally hit by a sword blow or an arrow, it doesn't matter, a hit reduces your life points only minimally. The fighting is so demotivating and irrelevant that I simply went through the opponents later to save myself the misery.

The only good thing about the opponents is that you don't get to see so many of them. A swordsman here, an ax thrower there – that's it. To be honest, I wondered if the enemies were in the game just for the story to work with human invasion.

The loveless implementation of the opponents ultimately means that you can completely save yourself skill and weapon upgrades. Why bother and collect crystals for an upgrade when there are hardly any enemies and they also pose no danger?

Should it be difficult or easy now?

Apart from the superficial implementation of opponents, what annoys me about the game is the wall jump. In almost every other game, pressing the jump button repeatedly is enough to jump back and forth between walls. In "Skelattack", on the other hand, you have to press left and right on the D-Pad to perform wall jumps. I have no idea why the developers chose this game mechanic. It takes a lot of time to get used to it and makes simple jump sections unnecessarily difficult.

Deadly spines above, deadly lava below and a fiddly wall jump in front of me: I'm going to go there a few times. But it doesn't matter, there is a checkpoint.

The developer studio Ukuza was obviously not sure which target group it wanted to address with the game. On the one hand there are the tricky passages that delight fans of hardcore platformer like "Super Meat Boy" and "Celeste". On the other hand, the developers have really placed a checkpoint every few meters at which Skully is automatically revived. Ukuza probably wants to reduce the level of difficulty in order to get casual gamers on board. The game loses its appeal for professionals because death is hardly punished. Okay, I lose a few crystals when I die, but who cares? The upgrades I need the crystals for are a waste of time anyway.

Conclusion: if you were a pure platformer …

I have a lot to complain about at "Skelattack", but it's actually not a bad game at all. Especially when you consider that I use genre kings like "Super Meat Boy" and "Hollow Knight" as a benchmark for the comparison. A short research also showed that "Skelattack" is only the second officially released game from Ukuza. I can forgive the developers for not delivering a masterpiece.

Don't be disappointed. For your first appearance, it was very decent.

As already mentioned, I think that "Skelattack" would work much better as a pure platformer. Of course, the human invasion can be told a little more credibly if Skully also fights the invaders. Then the combat element should have been much more in focus.

Platform friends would also have been happy with a banal story if the fun in the game had been right. The Mario Games are the best example of this: a plumber saves a princess again and again from the claws of a giant turtle, and the fans celebrate it – because the gameplay is awesome.