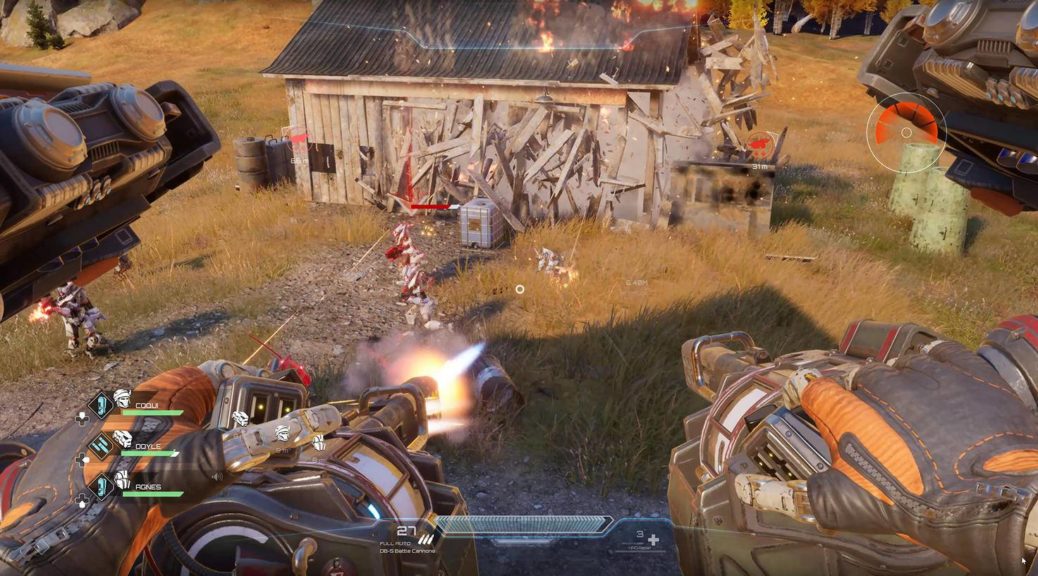 "Disintegration" has a spectacularly good basic idea: Take a strategy game, move the camera freely and screw on machine guns. First-person shooter and real-time tactic are supposed to come together in the game, why my test "unfortunately" remains, my test reveals.

Around half of the "disintegration" campaign I feel the desire to play an escort mission – for a change and a little something new happens. Escort missions are the very last thing and no one should ever have this wish. But it gets worse: a few hours later, my wish actually comes true. And with that, we are right at the heart of the problems of "disintegration" – a game that I would like to like because it does so much right at first glance.

In the shooter of "Halo" co-finder Marcus Lehto and his new studio V1 Interactive, I sit as a pilot in a "Gravehikel" – a hover bike tank that hovers over the battlefield. I shoot at opponents from above and give orders to a small group of up to four ground units. Running, attacking, throwing grenades, something like that.

View from the cockpit: This is what "disintegration" looks like when things are going high.

So far, so simple – and so elegant: first-person shooter and real-time strategy come together here in a way that impresses with their immediacy and coherence. For the fact that this idea is still fairly unused and untested, it works flawlessly: flying around and firing is done casually, with just one button I give commands to my team, skills are triggered with another push of a button.

The tragedy of "disintegration" is that the game with its fresh gameplay mechanics hardly knows anything interesting to start with.

That would be okay if the firefights were actually strategically demanding. But they don't, because the beautifully intuitive mechanism of "disintegration" has the disadvantage that the tactic remains superficial.

If requested, my team can focus the fire on large opponents. I wouldn't call that "strategy" yet …

Yes, it can make a little difference how and when I trigger my troop's abilities and how many opponents catch my grenade or slowdown field. Yes, I can rush forward with my gravehicle and take out snipers or flank enemies to make it easier for my ground troops. And yes, there are also explosive red barrels to chase up.

But that was it with the tactical depth. Since I can only move my ground units as a closed squad, careful planning of the positioning is eliminated from the outset. After a good nine hours of single player campaign, I'm not even sure if "disintegration" has a functioning cover system or if my troops behind containers are not hit by chance – if they stop there.

The pilot flies in front, the crew runs with it.

May contain traces of strategy

Not that better coverage would do much good. The game regularly throws waves of opponents into my back on extensive areas, which makes any kind of sophisticated strategy obsolete anyway. There is real tactic in "disintegration" at exactly one point of the battle: right before that, if the opponents have not noticed me and I can decide how to open the fight. After that, the skirmishes consist almost entirely of wild firing, gut decisions and reacting to the behavior of the AI, which flows wave by wave from all directions. If my fellow soldiers die on the ground, I have 30 seconds to revive them by flying over them. If I die myself, the checkpoint starts all over again.

If I finish a mission in between, the game does not save at the last checkpoint, but rather lets me start again at the beginning of the mission – very inflexible. This also applies if the game crashes, which was unfortunately the case twice with the tested PC version. According to the troubleshooting guide for the review version, it is up to my processor and is patched for release.

Restrictions on all fronts

At least a little variety is created by arming my Gravehikels. I do some missions with a machine gun and a medipack launcher that heals my ground troops. In other levels I am equipped with rocket or grenade launchers, shotguns or sniper rifles. However, I am not allowed to choose my armament freely in the story missions – which means that the game takes away another possibility for me to develop my own strategies.

The campaign gives me armament and ground troops.

Too bad, because that's exactly what the campaign's story would have given: "Disintegration" takes place in a future in which people have packed their brains into robot bodies using a technique called "integration" in order to become immune to a plague. That worked, and actually the plan was to "disintegrate" and become human again afterwards. Some cyborgs, the Rayonne, feel much more comfortable as strong machines, subjugate the "natural" and forcibly integrate them. As gravehicle pilot Romer Shoal, I join a likeable bunch of outlaws in the resistance and fight against the Rayonne.

Resistance: Romer Shoal (3rd from left) and the Outlaw crew.

Apart from very nice characters and the actually exciting cyberpunk setting, the leapingly told campaign and peppered with moderate dialogues is also not a narrative highlight. But: there would have been a lot of space here for trappers, weird improvised weapon systems and guerrilla tactics. "Disintegration" is giving these options away with full hands.

After all: The online multiplayer from "Disintegration" gives hope. Here teams of Gravehikel pilots, each with their own ground troops, are currently fighting against each other in three modes, there are more diverse goals to do more than just shooting at enemy hordes and I can also choose my armament. For the multiplayer to run, "disintegration" first needs a community that stays with it and remains loyal to the game.

I couldn't test the online multiplayer of "Disintegration" with the pre-release version due to a lack of matches. I was able to collect a few impressions at Gamescom 2019 and in the beta phase. However, this test and rating only refer to the campaign.

Judging by the single player campaign, "disintegration" is unfortunately a disappointment. The basic idea is good, the controls as well, the implementation leaves a lot to be desired – especially with mission design, but also with story and playful freedom. The bottom line is that the game remains an acceptable first-person shooter with poor strategy options.

And finally, once again: escort missions are the very last thing.