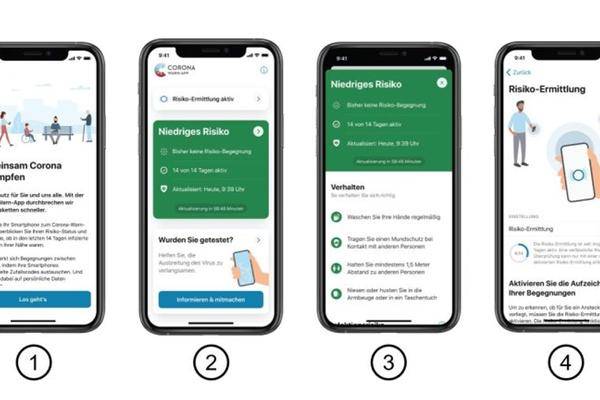 The introduction of a corona tracing app in Germany has been debated for more than two months. After various delays, also due to data protection concerns, it should finally be ready in mid-June. The first screenshots already show what the app should look like.

Since the warning app is an open source project, every interested user can look at the development. As Caschy's blog reports, current screenshots of the application were published on Friday evening at the version control platform GitHub. The screenshots show the warning app on both iOS and Android – the tracing interfaces have now been released by the manufacturers for both operating systems.

Risk assessment based on Bluetooth tracking

In addition to an introduction, the screenshots of the Corona Warning app also show tips on correct behavior in public. In addition, based on contact tracing via Bluetooth Low Energy (LE), the app assesses how high the risk was for the user to have been exposed to a possible corona threat.

The Corona warning app was developed by SAP and the Telekom subsidiary T-Systems. After the initial dispute, it will be based on a decentralized approach, so the contact details will only be saved on the user's mobile phone and not on a central server. The installation of the app is completely voluntary in Germany. In addition, users are free to decide whether they want to pass on this information via the app in the event of an infection. The application generally does not record and transmit telephone numbers and names of users.

Further information on the Corona warning app can be found on the official homepage .