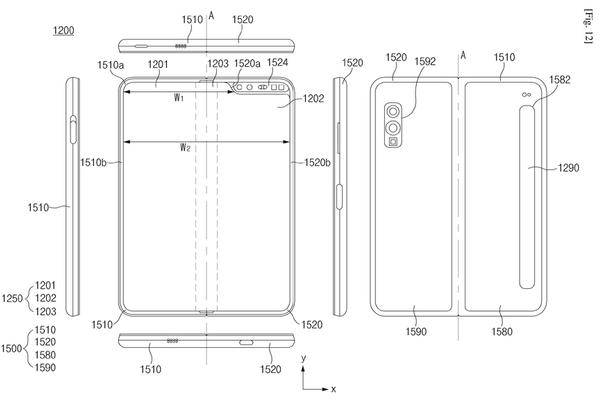 Is Samsung launching a cheap version of its foldable Galaxy Fold smartphone? A corresponding patent application provides the first clues to a Galaxy Fold Lite.

Samsung apparently increasingly uses foldable smartphones. In addition to the Galaxy Fold 2 , the manufacturer could also launch a Galaxy Fold Lite in the coming months. According to SamMobile, this emerges from a patent application by the manufacturer , which was published on May 22, 2020.

The outer display shrinks to a narrow strip

The application describes a smartphone that looks very similar to the Galaxy Fold . The most noticeable change concerns the small display on the outside of the device. The Galaxy Fold has a full 4.6-inch screen, the Galaxy Fold Lite apparently only has a narrow display strip. It is probably used to display the time, date and notifications.

The patent also shows a device whose display can be folded up like the original fold. There is a notch for the front camera that appears to have two lenses in it. The main camera on the outside is also apparently a dual lens setup. The buttons and the USB-C port seem to be arranged like the Galaxy Fold.

Will foldables be waterproof in the future?

The patent application also suggests that the foldable smartphone could receive IP certification. Maybe the device is dust and waterproof. Current smartphones with a foldable display are considered to be comparatively susceptible to dust and are not waterproof. An IP certification for the Galaxy Fold Lite would therefore be a great step forward.

Many rumors, but little concrete so far

Rumors also say that the Fold Lite should forego 5G reception and have an internal memory of 256 GB. The possible price is under discussion of $ 1,099. That would be significantly cheaper than the 2,100 euros that are due for the Galaxy Fold. Hopefully we will find out in the coming weeks or months whether the speculations are correct and whether Samsung is actually working on the Galaxy Fold Lite.