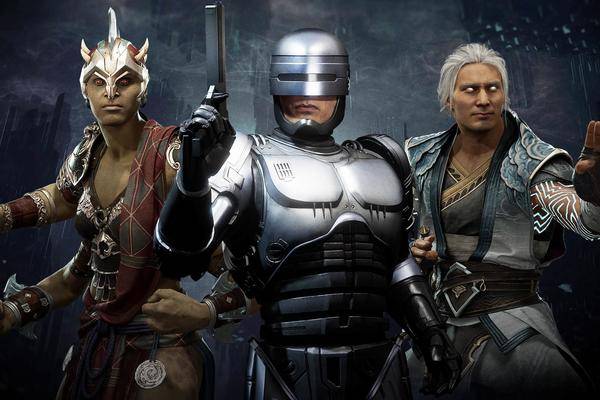 The earth is on the verge of doom again, the polygon blood is splashing meters high – and even the RoboCop tin can drop by: There is news about the brutal beating hit "Mortal Kombat 11".

With the "Aftermath" DLC, the story of "Mortal Kombat 11" continues on May 26th. The new additional content continues the spectacular story of trust and fraud (and, of course, the fate of the world). In addition, fans are looking forward to the next guest fighter – and that's none other than RoboCop, the cybernetic police officer from the classic film of the same name. It is even set to music by original actor Peter Weller.

In addition to RoboCop, "Aftermath" brings two new additions to the fighter camp: Wind god Fujin is the brother of fan favorite Raiden and protects the earth kingdom. The four-armed Sheeva, on the other hand, is half human, half dragon and clearly not a popular figure. In addition, three new character skin packs are to appear gradually.

In addition, the "Aftermath" DLC gives you access to new stages, including the classics Dead Pool and Soul Chamber. In addition, there are now stage fatalities, in which you can send your opponent into the eternal game over using the level environment. Even the Friendships are back: They first came into the series in the 1990s and end a match harmoniously instead of with the most brutal mutilation.

The full pack in one pack

If you already own the main game, you can buy the "Aftermath" extension for 39.99 euros or the "Mortal Kombat 11: Aftermath + Kombat Pack Package" for 49.99 in the digital store for your system.