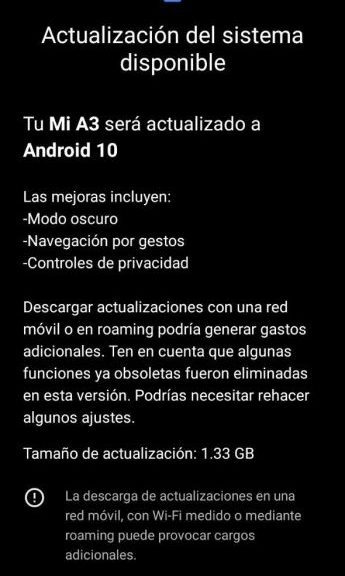 After several cancellations in its deployment and a great controversy behind, Xiaomi has redeployed Android 10 again for its Xiaomi Mi A3 . This time it is the fifth update, which apparently comes without any apparent problem and to a greater number of users.

To the surprise of many users of the Xiaomi Mi A3, Android 10 has started to deploy again after a small update that did not finish reaching everyone. This time, it does so not only for users who still have Android 9 , but also for those who have already upgraded to Android 10 .

Without going any further, Xiaomi Mi A3 users who still had Android 9 have started has received an update of approximately 1.33GB based on Android 10. In addition, this update adds the latest Android security patches updated as of 5 of April.

For users who already had Android 10, its update only adds the April security patch, occupying in this case about 32.69MB .

In addition, both updates include improvements in the Dark Mode , in the navigation by gestures and in the privacy control of the system. Three characteristics that generally define the latest Google operating system.

As always, before updating we recommend that you make a full backup and at least have a 50% charge or better yet, update your Xiaomi Mi A3 directly connected to the electrical outlet.