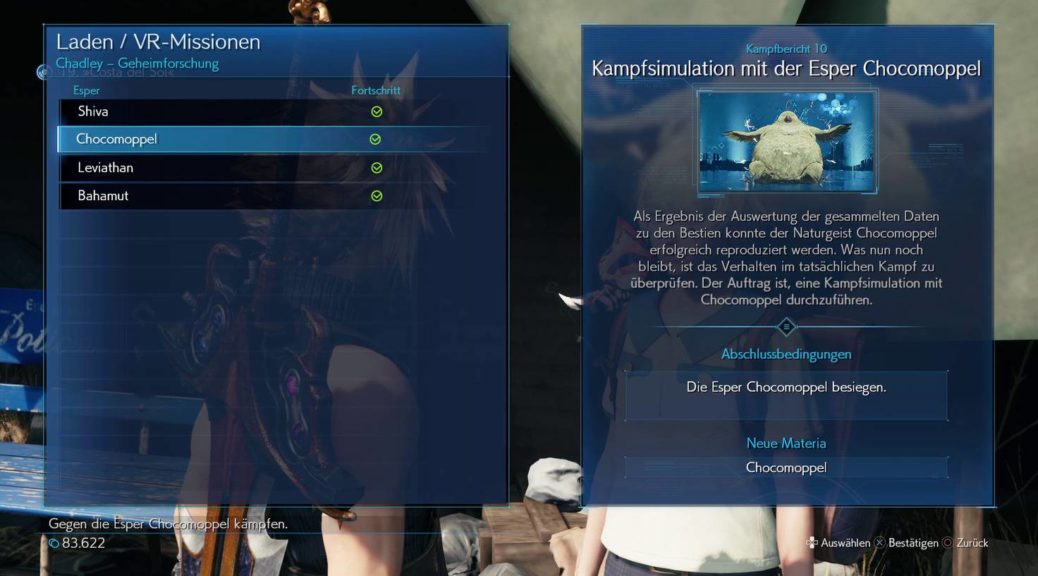 In "Final Fantasy 7 Remake" you can also summon chocolate doubles in addition to the classic Espers Ifrit and Shiva. It is a fat chocobo that masters a pretty crazy fighting style. Our guide will tell you where to find the Chocomoppel call material.

Since "Final Fantasy 3", players in the series have been able to summon powerful Esper to support them in combat. Chocobos, the iconic yellow birds, are more known to connoisseurs of the series as a means of transportation. In "Final Fantasy 7 Remake" a very special version of a chocobo is celebrating its premiere as Esper: Chocomoppel – a plump chocobo that obviously likes to eat a lot of bird food. You shouldn't be fooled by its exterior, the fat poultry has a lot on the case. We will now explain where you can find his call material.

Here you get Chocomoppel's call material

You can get the call material for Chocomoppel in Chapter nine from Chadley. You can find him between a few passers-by at Wallmarkt. Before he gives you the call material for Chocomoppel, you have to defeat the fat Chocobo in a virtual fight. Just speak to Chadly and then select "VR missions". There you will find the chocolate cocoon in the list of esper.

The fight against Chocomoppel is less intense compared to the duels with the other Espers. However, you should not underestimate the fat chocobo: it is not the fastest, but it does a lot of damage. Chocomoppel has no specific element weakness. This means that it is best to tackle him with your strongest physical attacks and spells.

When Chocomoppel is in shock, you should properly pound the poultry.

Try to shock him with attacks that fill his shock bar. Then drive up the bonus damage with Tifa's Unleashing and Righteous Fist skills and Aerith's Retribution Ray. Since the shock state of chocomoppel lasts a particularly long time, you can do a lot of damage to the fat chocobo.

Chocomoppel has mastered these attacks

Chocomoppel has a relatively large repertoire of attacks. If the bird shrieks "Kweeh!", It tries to give you a swing with its wing. This attack is relatively harmless. If the words "roll, roll" appear above his head, the fat bird flips forward and then back again. This attack is also harmless, but knocks your character over when hit – which is very annoying when preparing special techniques and spells. "Kweeeh!" (this time with three e) is a modification of the roll attack, in which Chocomoppel rolls wildly through the arena and then hops through the area. In this attack, you should go into a defensive position and wait until the maneuver is over.

Attention! Chocomoppel is about to roll and jump wildly around the arena.

The little mogrys that fly around the fat chocobo throw more opponents into the arena. You can either do it quickly with special techniques or just ignore it. Since the chocomoppel bites the grass quite quickly, the additional opponents are of little importance. The chubby yellow bird also masters an attack called "Rums!", In which it takes off briefly, only to pounce on you later with all its weight. You can also safely neglect this attack. You should only watch out for his "Big Bomb" ability. Here he drops a big bomb in the direction of your characters, which deals a lot of area damage. If this attack hits you, you should heal your troops immediately afterwards.

Overall, the fight against chocolate cocoons shouldn't be a big challenge. After your victory, Chadley gives you the Chocobo's calling material and you can summon it yourself in battles.