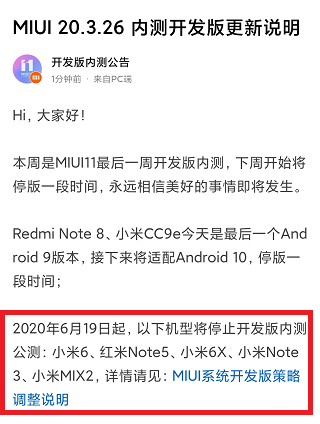 MIUI 12 is just around the corner, a new version of Xiaomi's famous customization layer that is already in full development after the end of the MIUI 11 beta program that was announced a few days ago.

As the firm is accustomed to us, MIUI 12 will bring great innovations, focusing this time on better optimization of the system in general and that apparently will not be available for 5 new devices launched between 2017 and early 2018.

This is confirmed by the latest publication made by the MIUI team where they announce that from June 19 of this year the Xiaomi Mi 6 , Redmi Note 5 , Xiaomi Mi 6X , Xiaomi Mi Note 3 and Xiaomi Mi Mix 2 will cease to be part of the beta program.

Publication on Weibo carried out by the MIUI team.

A confirmation in itself that does not ensure that they will not receive MIUI 12, but that if we take into account the launch of the previous versions of MIUI, the cancellation of the beta program of other terminals led to the fact that they did not finally receive the new updates .

Therefore, it is expected that these devices do not see the arrival of MIUI 12 except for some last minute change after the numerous complaints that we will probably see from users of the Xiaomi Mi 6, the Redmi Note 5 or the Xiaomi Mi Mix 2.