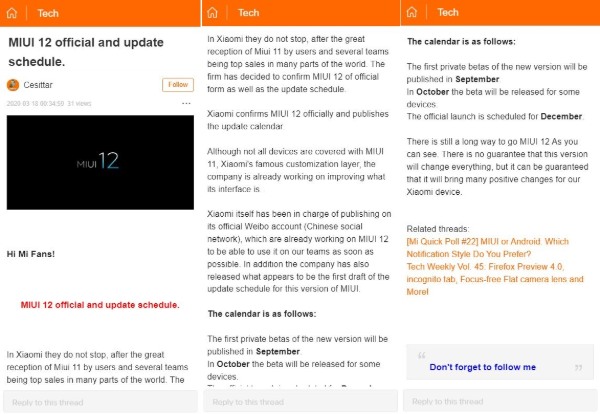 Only a few months have passed since Xiaomi officially launched MIUI 11 in a stable way. Even so, the first reports have already begun to appear, revealing the upcoming MIUI 12 release date .

And it seems that a new leak shows us how the new version of Xiaomi's famous customization layer would arrive much earlier than expected. According to a post made in Mi Community that was deleted minutes later, Xiaomi would have already started developing MIUI 12 .

In detail, as we can see in the following image, the first private beta of MIUI 12 would arrive in mid-September , being the month of October when we could install the first public betas.

Likewise, said graph shows us that MIUI 12 would begin to deploy in a stable way at the end of the year , that is, in the last quarter, being very likely that December is the month chosen by Xiaomi for its debut.

A proof that although it is not an official confirmation, it does bring us a forecast, probably quite accurate, of the deployment dates of the various versions of MIUI 12 .