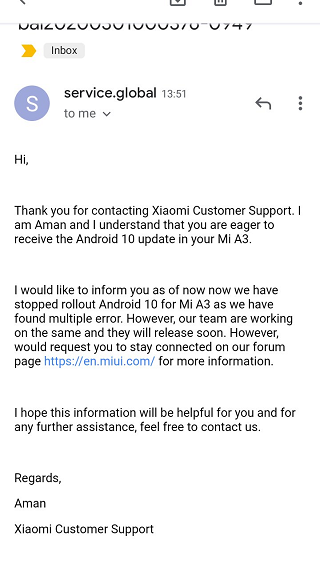 No more than two days ago we anticipated how Xiaomi finally began to deploy Android 10 for its Xiaomi Mi A3 . Great news that has lasted and that apparently Xiaomi has been forced to stop the deployment of this new update due to its large number of errors .

This has been informed to us from 9to5Google and Piunikaweb where they report how Xiaomi's own technical support has had to warn several users of the Xiaomi Mi A3 of the multiple errors that this update presented:

«Hi, thanks for contacting Xiaomi technical support. I am Aman and I understand that you have been among the first to receive the Android 10 update on your Mi A3.

I want to inform you that we have stopped the deployment of Android 10 for the Mi A3 having found multiple errors. Even so, our team is working on them to correct it as soon as possible. However, we recommend you to be aware of any developments at https://en.miui.com for more information. »

According to this email, Xiaomi would have canceled the deployment of Android 10 due to the large number of bugs that apparently are already being attempted. Something new, which unfortunately we have already seen with the arrival of Android 9 and Android 10 to the Xiaomi Mi A2 and with the update of other smartphones of the brand.

Therefore, if you currently have the Xiaomi Mi A3 and you got to update it to Android 10, we recommend you keep calm until Xiaomi launches an update again correcting all the faults present in that update.

Until then, we will try to keep you informed of any developments in this regard.