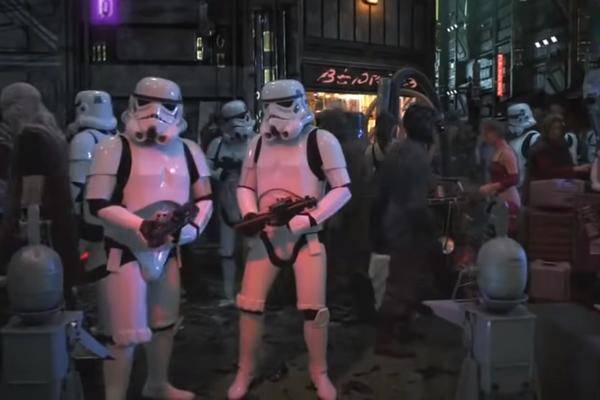 With "Star Wars: Underworld" George Lucas wanted to bring the Star Wars to television ten years ago – for the first time as a live action series. Nothing came of the project, now we can at least imagine what could have been based on some leaked test scenes.

"The Mandalorian" recently achieved what "Star Wars: Underworld" was not granted in 2010 at Disney +: To implement "Star Wars" as a TV series with real actors (unlike cartoons). Test recordings from "Underworld" have now appeared on the Internet.

A gangster drama in the "Star Wars" universe

According to Geek Tyrant, the series was set to play between Episode 3 and Episode 4 and become a "gangster drama" in the underworld of the big city planet Coruscant. This can be seen in the leaked scenes: The dark streets and canyons are reminiscent of "Blade Runner", only that stormtroopers and aliens are everywhere. In the five-minute section, we accompany a woman on an undercover mission: she obtains the plans of a star destroyer from a contact person and has to hide from troops of the empire.

Making-of recordings show how the screen test was created

While the material looks very interesting optically, it leaves something to be desired in terms of acting. But that could be due to the fact that these are test recordings. After the five minutes from "Underworld", making-of scenes can be seen, which show the creation in a large green screen box. Apart from the actors in their costumes and some selected props, the environment of "Star Wars: Underworld" apparently was created entirely on the computer. Remarkable: The green screen is converted live into the finished images, as can be seen on control monitors.

George Lucas had big plans for "Underworld": According to Geek Tyrant, the project should have 400 episodes, 100 scripts were already finished. Unfortunately, we will never see what could have become of it.