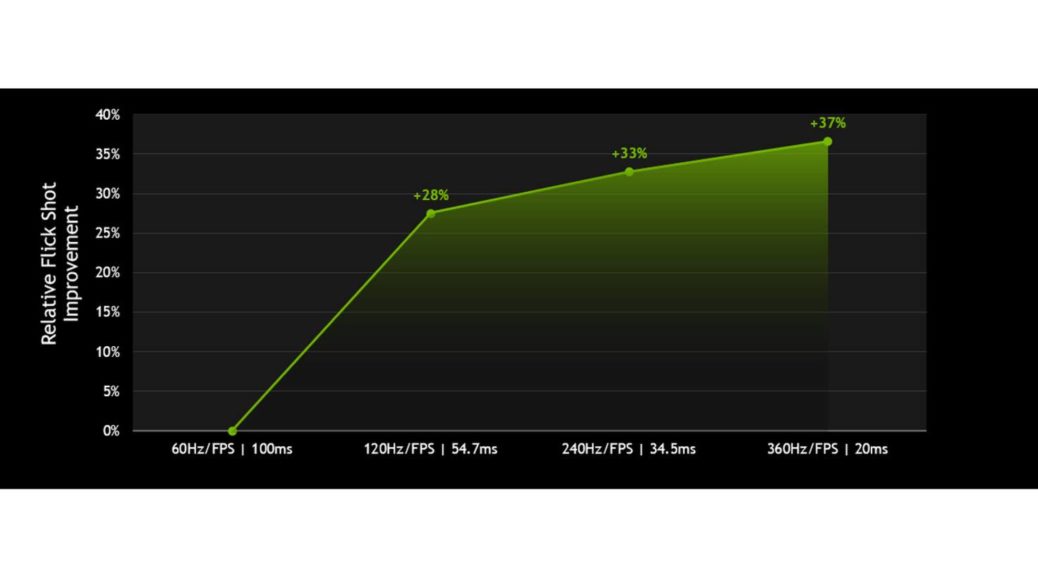 The so-called "G-Sync Esports Displays" from Nvidia offer a never-before-seen refresh rate of 360 Hertz. So you can display six times as many frames per second than the usual 60 Hertz displays. This is impressive, but currently only benefits a few professional players.

Nvidia and Asus recently announced the ROG Swift 360 as the first 360 Hertz monitor for retail. Unfortunately, there is still no information on price and release date, although it only measures 24.5 inches and resolves with Full HD, the monitor is already ahead of its time. It can display 360 pictures per second. This ensures a smooth feel, a sharper representation of movements and possibly a higher hit rate in competitive first person shooters.

According to Nvidia, 360 Hz leads to lower system latency and a higher "flick shot" hit rate in "Overwatch" ("flick shot" means to fire spontaneously and unconsciously at a target).

Over 300 FPS only manage some old games

So there will soon be a suitable monitor for displaying ultra-high frame rates, but even the best processors and graphics cards cannot send 360 FPS to the monitor in modern games. This is only an option for some old games. With this in mind, GPU Check has tested numerous games in Full HD resolution on a PC with the high-end graphics card Nvidia GeForce RTX 2080 Ti and the fast processor Intel Core i7-8700K.

Refresh rates of over 300 FPS are therefore possible with ultra-graphic settings with games such as "Rainbow Six Siege", "Counter-Strike: Global Offensive", "Rocket League" and "League of Legends". At low settings, "Destiny 2" and "Overwatch" can do that too. Fortunately, these games are often played competitively. For comparison: A modern single-player game like "Assassin's Creed Odyssey" only achieves 73 frames per second in Full HD with ultra settings.

Nvidia itself uploaded a video of "CS: GO" with 360 Hertz and corresponding frame rates. Unfortunately you cannot watch the video with 360 FPS, because you do not have the right monitor. But you may get an impression of the gameplay benefits:

Most gamers will weigh between graphic bombast and extra high refresh rates. Many new monitors on the market offer features such as 4K resolution and HDR with a refresh rate of at least 144 Hertz. These include the Acer Predator CG7 and the Acer Nitro XV3 XV273. LG's 2019 OLED TVs are G-Sync compatible and create 120 Hertz with a QHD resolution.

Already 120 or 144 Hertz offer a clear advantage over 60 Hertz and that should be enough for most gamers. After all, the refresh rates require a lot of power, which can also be invested in more stylish graphics.

Competitive players can take a look

Pro gamers can, however, visualize the advantages of the 360 Hertz monitors. Nvidia speaks of a 4 percent advantage in system latency or input lag compared to 240 Hertz monitors. Commands such as pressing a key lead to a corresponding action in the game even faster. If you are really playing for prize money, this can make the crucial difference between first and second place.

Overall, the 360 Hertz monitors offer the usual advantages of displays with high refresh rates, which are even more pronounced at 360 Hertz:

We are already looking forward to the first tests by game editors, who are examining the advantages of 360 Hertz compared to 240 Hertz. The tests of 240 Hertz displays, including one from YouTuber Linus Tech Tips in collaboration with professional gambler Shroud and my own , mostly come to the conclusion that there is a noticeable difference to lower frame rates. With even more Hertz, the gameplay advantages seem to be less and less, but other advantages such as the sharpness of the moving image display may not.

Conclusion: Currently only something for pro gamers

As Nvidia rightly says, the 360 Hertz monitors are aimed at professional gamers. For example, if you gamble competitively in the clan "Counter Strike" and want to get the last bit of advantage for your team, you could think about such a monitor. The performance losses of over 300 frames per second should be too high for everyone else. Most gamers will rather use the performance for nicer graphics and a higher resolution.

Most gamers will find the 360 Hertz (or the appropriate frame rates) too much compromise.

360 Hertz monitors embody a fundamental industry trend towards high refresh rates. The upcoming PlayStation 5 and Xbox Series X consoles should at least enable gaming at 120 frames per second and there is already a first gaming laptop with a 300 Hertz screen. This trend is in competition with the ever higher display resolutions like 8K, which consume just as much computing power.

I personally hope that 8K will remain a niche for very large TVs. High frame rates have a much greater advantage for games and 8K really only makes sense for films with giant TVs. Hopefully, the future belongs to the high refresh rates.