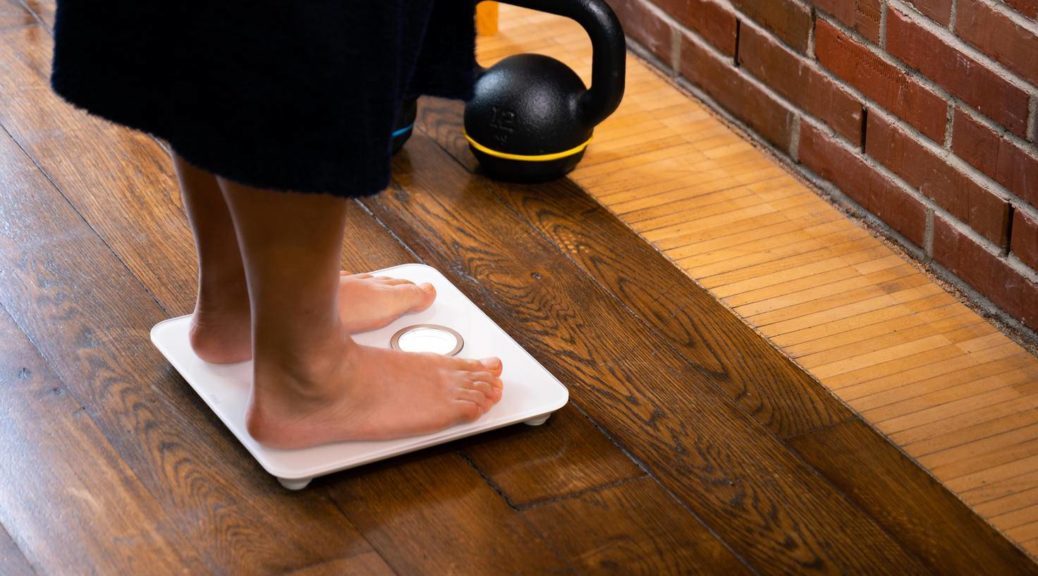 Analog scales for determining body weight are yesterday's news. Smart body fat scales are now more popular, as well as measuring weight, fat, muscle and water in the body and sometimes even have an integrated heart rate monitor. We took a closer look at two models: the Fitbit Aria 2 and the Withings Body Cardio.

Both body fat scales are models that have to be connected to the home WiFi. In this way, the measured values are sent to the corresponding Fitbit or Health-Mate app. I was able to connect both the Fitbit Aria 2 and the Withings Body Cardio to my WiFi without any problems.

In the two apps, only the respective model is added as a new device, then a few instructions follow and the body fat scales are ready for use.

Just step on it and you're ready to go.

There's even a little welcome smiley.

The more detailed overview and development over time is then available in the Fitbit app.

What is bioimpedance analysis?

This measures the body fat percentage. To do this, the user has to stand with bare feet on the scale, which sends a minimum amount of electrical current through the body, whereby the resistance (= impedance) is measured. The higher the resistance, the more fat there is in the body.

Get started with the Fitbit Aria 2: The intelligent body fat scale records the weight, the percentage of body fat, the body mass index (BMI) and the lean mass. The latter corresponds to body weight minus body fat. The values are measured using the bioimpedance analysis. So it is necessary to stand on the scales barefoot.

Small gimmick of the Fitbit Aria 2: Every user can create a personal icon that is assigned to their profile. At the end of the weighing process, it then appears on the small, round display of the scale.

The weighing itself takes only a few seconds. The Fitbit Aria 2 display only shows two values: the current weight and the percentage of body fat. For further and more detailed information, synchronization with the Fitbit app is necessary.

Recognize and use trends

In the overview you will find a list of all weight values. If you select a day, the app also reveals the current BMI.

As usual, the display in the Fitbit app is clear, which should make it easy for even newcomers to find their way around. The weight can be seen on the main page, from which further values can be examined more closely. For example the weight history of the past months, as far as measurement results are available. There I not only see the measured weight on the respective day, but another line also shows the weight trend. This is especially helpful when the weight curve has several swings up and down and I want to see if there is still a downward trend.

However, what I lack: In the diagram view there is no way to see the weight of a specific day. To do this, I would have to scroll to the overview page and each day. Feasible, but annoying.

For all values, you can switch between a weekly or monthly view.

What values can I still find in the Fitbit app?

Other values, the course of which you can take a closer look at, are the development of your body fat, changes in muscle and fat mass as well as the increase or decrease in your body mass index.

I have no idea what the "fat mass" area should tell me. It would be better to get averages for comparison.

I mostly used the monthly view because it makes it easier to follow the course.

I don't want to hear anything …

As clear as the app is designed, I lack further information on the individual values. There is only a reference in the representation of the BMI in which area my value moves. I already knew beforehand that a body mass index of 27 was not good. With the information about when the ideal weight starts and when the obesity starts, the whole thing would be more tangible and easier to understand.

About the Fitbit Aria 2

I was also lacking more information on the other values, such as weight or average body fat mass. It would have been more helpful if – like the BMI – there had been comparative values of other people with my gender and my age. There is also no explanation of what exactly "lean mass" means. I had to read that first.

Important: Enter the scales barefoot, which must be on a level and firm surface.

Oops, no WiFi? Don't do it. The scale simply synchronizes the data later with the app.

The small scale below the value indicates whether you are in the normal range or slightly above.

All values are clearly displayed in the Health-Mate app.

Special points in time can be selected within the diagram.

Body fat scale number 2 is the Withings Body Cardio. It also measures values such as body fat and muscle mass, but also the water content in the body, bone mass, heart rate and pulse wave speed. As with the Fitbit Aria 2, the measured data is sent to the Withings Health Mate app via WLAN.

What I noticed directly: a weighing process takes much longer than with the Fitbit Aria 2. However, this has to do with the fact that the body fat scale shows me a lot more data on the display. I can see all the values that I can see in the app for a brief moment on the display of the scale. Here too, measurements are carried out using bioimpedance analysis.

The Withings Body Cardio should be of particular interest to sports enthusiasts, since the app can be used to switch between a normal mode and an athlete mode. If the latter is activated, the scale adjusts the calculation of the body composition.

In the Health-Mate app, the measured values are shown clearly and one below the other.

Here I can also switch between the period that should be shown to me.

While most values are also measured by other Withings scales, measuring the heart rate and pulse wave speed is new in this model. It is important to keep reminding yourself that the body fat scale is not a substitute for a visit to the doctor. Of course, a doctor has far more complex measurement methods, but if used regularly, the scale may be able to provide helpful information to yourself or the doctor.

After all, my pulse wave speed is in the normal range – even if there is also room for improvement.

The scale recognizes as soon as the blood leaves the heart and flows over the aorta to the feet. Based on the time it takes for the blood to travel this way, the pulse wave speed is calculated and output in units of meters per second (m / s).

I particularly liked that the app offers me a lot of additional information if I need it. With just one click I get interesting information about what the pulse wave speed is and how I can improve my pulse wave speed and bring it into the green area. A clear plus point compared to the Fitbit Aria 2.

The heart rate is also determined together with the pulse wave speed. Here the Health-Mate app also gives me information about whether the frequency is in the normal range or too high or too low. When I tap the small arrow in the heart rate window, I get further explanations. Also about which areas are still considered healthy and where there is an urgent need for action.

In the Health-Mate app I can even add notes for an explanation or similar. to add to the measurement.

In general, I really liked the variety of information that the Health-Mate app gives me. In contrast to the Fitbit app, in Health Mate I can even select individual days in the diagram view and get specific values.

The body fat scale offers the possibility to activate a pregnancy mode. Then only the weight is tracked, but not the body composition of fat, muscles and water. Every week, the pregnant woman also receives an overview of weight development and interesting information about pregnancy.

Conclusion: And the Winner is …

Withings Body Cardio or Fitbit Aria 2: Which body fat scale will win the race in the end?

Basically, the Fitbit Aria 2 is a reliable body fat scale that shows the user the most important information and prepares it clearly in the app. Setting up the scale and connecting to the Internet also work smoothly and without major complications. However, there are deductions for the little information that can be found in the app about the meaning of the values. Comparative values would also be desirable.

Not so with the Withings Body Cario: the body fat scale provides detailed information about the measured values and beyond. The Health Mate app also allows more interaction options. I clearly liked this model better. Of course, you should consider in advance what is important to you with a body fat scale. In view of the fact that the Fitbit Aria 2 costs only 20 euros less than the Withings Body Cardio, but measures much less values, the Withings scale is the clear favorite for me.

The body scales work best with the corresponding smartwatches and fitness trackers from the respective manufacturer. However, I can say from experience that you can use the Withings Body Cardio even as the owner of a Fitbit tracker and the Fitbit Aria 2 as the owner of a Withings smartwatch. In the meantime, I exchanged and had my Fitbit Charge 3 for an Apple Watch Series 5 no problem with both models when it comes to synchronization.