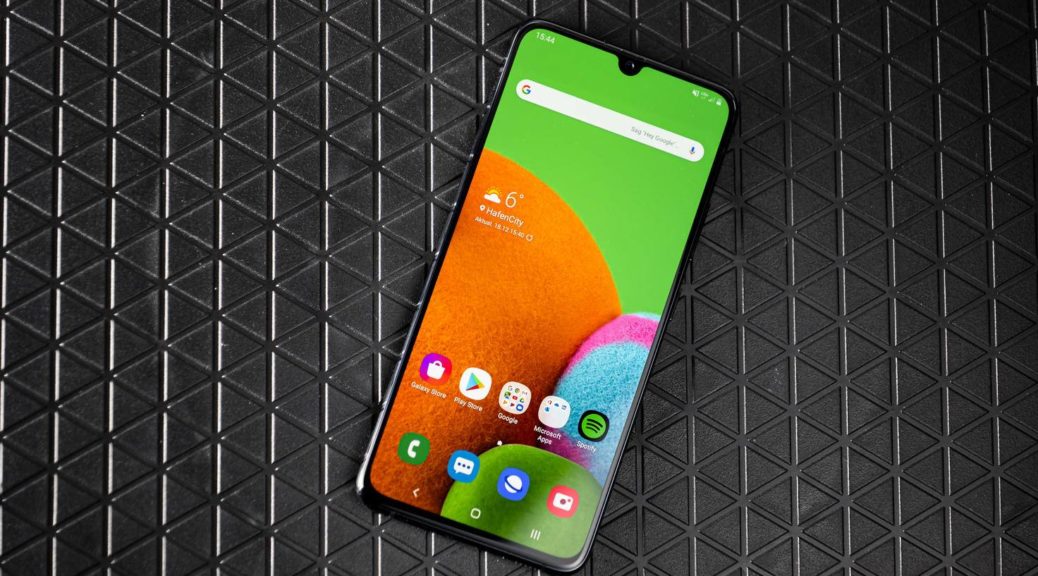 The Samsung Galaxy A90 5G is one of the first smartphones to be built specifically for 5G reception. In the test, the smartphone turned out to be a good device – even if 5G is currently nothing more than a promise.

5G was also launched in Germany. The fact that most have not heard it yet is due, as is so often the case, to the slow pace of expansion and the questionable information policy of the providers. But 5G smartphones can sometimes be found almost as difficult as 5G antennas. A model that has finally made it into free trade in Germany is the Samsung Galaxy A90 5G.

Somewhere between upper and middle class

The Galaxy A90, which Samsung has kindly given us for testing, is in a somewhat strange market position. On the one hand, it is nominally part of the A-series from Samsung, which is usually used mainly by mid-range smartphones, but on the other hand it also shows off many high-end specs.

Visually, it is clearly based on devices such as the Galaxy A70 or the A50. A 6.7-inch display with a resolution of 2400 x 1080 pixels is available, which gets by with minimal margins. There is a notch for the front camera in the middle of the upper edge.

The glass back is designed with a beautiful check pattern and definitely an eye-catcher – but unfortunately also quite a fingerprint magnet. The whole thing is rounded off by a vertically arranged triple camera. You won't find a physical fingerprint sensor on the Galaxy A90. Like the Galaxy S10, it was integrated directly into the display.

The glass back shines with a chic pattern.

In terms of feel, the Galaxy A90 5G definitely looks significantly larger and bulky than the flagship Galaxy S10 + and is more reminiscent of the iPhone 11 Pro Max. With a weight of 206 grams, it is also one of the heaviest smartphones currently on the market , Anyone who is flirting with the Galaxy A90 5G must therefore also be comfortable with the idea of carrying a really big and heavy phone with them.

A very clear advantage that a large smartphone offers is logically a large display. And that's not only big on the Galaxy A90 5G, it's also pretty good thanks to the built-in AMOLED panel. The contrasts are strong, the colors are saturated and the brightness is also impressive.

The large display is a real advantage of the Galaxy A90 5G.

You can only complain, if at all, in comparison with a device like the OnePlus 7T Pro. This has a better resolution and a 90 Hz panel and clearly beats the Galaxy A90 5G again. Samsung has also refrained from HDR certification of the screen. However, this should be bearable for most users.

High-end power in the middle class

The main processor in the Samsung Galaxy A90 5G is the Snapdragon 855 – a chip that was also used in many flagship smartphones in 2019. The processor ensures that the smartphone almost never lacks performance in everyday use and guarantees smooth performance.

In a benchmark comparison, which I carried out as part of my test with the AnTuTu app, the A90 even performed slightly better than my Galaxy S10 + with the Exynos 9820. The measured difference in performance is not noticeable when used in everyday life, but at least measurable.

An AnTuTu benchmark comparison between Galaxy A90 and Galaxy S10 +.

The processor performance is rounded off by 6 GB of RAM, which ensures that a smooth work pace is guaranteed even when several performance-hungry apps are open in parallel. 128 GB of memory is available on the device for photos, videos, music, apps, games and other data. On request, this can be expanded by up to 512 GB using a microSD card.

Charging is via a USB-C port, there is no headphone jack.

And then of course there is the very large battery with a capacity of 4500 mAh. This ensures excellent standby times and provides enough juice for two full days with moderate use. At least a whole day should also be there for power users at any time.

Great software – unfortunately with a lot of bloatware

Evaluating the software of Samsung smartphones is not easy. There is basically nothing to complain about in the One UI 1.5 user interface. This looks chic, is well structured and runs smoothly at all times. It is particularly nice that Samsung has optimized the entire interface for one-handed operation despite the large display.

However, there is also a dark side: Samsung still delivers its smartphones to our taste with far too much unnecessary software ballast. This does not even mean the manufacturer's own web browser, which is admittedly pretty good, but the software from Facebook, Spotify, Netflix and Microsoft, which is preinstalled on the device at the factory. Most apps can be uninstalled easily, but it is annoying anyway.

A smartphone is looking for its network

The most important argument to choose a Galaxy A90 5G is undoubtedly 5G. Unfortunately there is only one problem. Because even though the first 5G networks are theoretically already available locally, there is currently hardly any coverage available. Even in the cities where Telekom and Vodafone have already started using antennas, these only cover isolated urban areas. If you are not lucky enough to live or work there, the quick reception is of no use at the moment.

With 5G reception this is (still) a thing in Germany.

Whenever 5G reception is not possible, the Galaxy A90 automatically switches to the next best network. Most of the time you spend with the 5G smartphone in LTE or 3G networks and have no speed or latency advantages over other smartphones.

The 5G network card from Telekom in Hamburg only shows six small dots.

That may change in the coming months and years, of course – depending on how well the network operators are making progress with their expansion plans – making the decision to buy a new smartphone based solely on this hope is difficult.

Camera: Just past the upper class

The camera setup of the Samsung Galaxy A90 5G can at least be seen on paper. With a 48-megapixel sensor, an 8-megapixel wide-angle lens and a 5-megapixel depth sensor, the device offers a perfectly suitable setup. Images with the main sensor therefore also convince with good detail sharpness and realistic colors. When using the wide-angle lens, however, the lower sharpness is immediately noticeable.

The Galaxy A90 5G has three lenses.

It is a pity that there is no stepless zoom. Even more unfortunate is the lack of an optical image stabilizer. This is particularly noticeable in pictures in night mode and, of course, in videos. They can be recorded either in 1080p with 60 frames or in 4K with 30 frames per second.

The camera provides a good level of detail …

The wide-angle optics cannot quite keep the level.

Close-up with the standard lens.

Compared to the Galaxy S10 family, the camera setup is also much less versatile. Most modes only work with the 48 megapixel main lens. Night mode, for example, cannot be used with the wide-angle lens or the 32-megapixel front camera.

The bottom line is that the Galaxy A90 5G "only" scores with daylight shots with the main camera. That's good, but in all other camera disciplines, users have to accept compromises.

Conclusion: a good smartphone, but for whom?

The Samsung Galaxy A90 5G is currently the cheapest 5G-capable smartphone on the German market. The term "cheap" can be seen relatively, because with an RRP of 749 euros it exceeds the current street prices for the flagship Galaxy S10 in many places.

For the money, you get a good device with a chic display and a brisk performance, which, however, is not in the top league, especially in the camera area. To compensate, it offers a 5G modem and, at least in theory, can surf the net faster than most other smartphones. But this advantage is actually only of a theoretical nature at present, because 5G network coverage in Germany is practically nonexistent, with the exception of a few enclaves in a few major cities.

And so the Galaxy A90 5G remains in practice a normal 4G-capable smartphone, which is not bad, but still costs more than the better Galaxy S10, for example. For this reason, I currently see only a limited target group for the Galaxy A90. If you don't want to jump on the still very unreliable 5G train, you don't need this device despite its advantages.