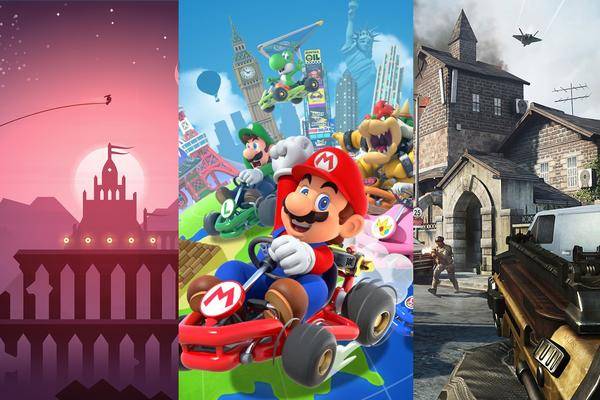 You are looking for the best mobile games to pass the time on the go? Do not worry, the offer is abundant! In our list you will find the most exciting new releases of the year 2019 as well as some timeless classics, which provide fun on Android smartphone, iPhone, iPad and tablet.

"Auto Chess" is an early proponent of a whole new genre that became popular in 2019: Auto Battler . In these strategy games you place units on a battlefield and let them automatically fight against your opponent's troops. Then you can upgrade and strengthen them before the next round of combat begins. Simple and addictive!

On PC and consoles "Call of Duty" has been a hit for years. Now there is the first person shooter for mobile devices. Fight against other players in the Fives team for the win or fall into the Battle Royale mode, where you have to remain as the last of 100 players. Fans of the series are looking forward to a best of popular maps from the "CoD" story.

Since 2019 "Mario Kart" is no longer home only on Nintendo consoles. "Mario Kart Tour" brings the mother of kart racing on Android and iOS smartphones. The gameplay is self-explanatory: Choose a Nintendo character, put him in the kart and become first!

Maintain your own farm, but without the dirt, the cattle smell and getting up early? "Stardew Valley" makes it possible! The game in pretty retro graphics makes you the owner of a small farm that you are allowed to farm. But that's not all: gradually you discover more of the world around you and become friends with your fellow human beings.

Meditation to play: In "Alto's Odyssey" you control a Sandsurfer, which slithers through picturesque levels. You do not have to do too much while playing, which is what makes the game so relaxing. If you like, you can still go high-score hunting. The predecessor "Alto's Adventure" works almost exactly the same way – and is also recommended.

"Monument Valley" is a puzzle game in which you have to guide your character through surreal buildings to the exit. You turn the structures with your fingers to discover hidden paths. The special feature: Optical illusions and impossible geometry often hide the view of the correct path through the level. And if you do not get enough of "Monument Valley": There is already a second part.

Thanks to "Pokémon Go", augmented reality gaming has firmly arrived on the smartphone in the mainstream. "Harry Potter Wizards Unite" now translates the gameplay into the world of JK Rowling's Sorcerer's Apprentice. Explore your neighborhood, browse magical items and creatures through the screen of your phone, and duel with other wizards.

Anyone who does not live under a rock knows: "Fortnite" is everywhere – and of course on smartphones and tablets! In the Epic Games Battle Royale hit you fight online against 99 other players. Who is still the last, wins. In the colorful game world, there are also many ways to have fun away from the competition. Especially nice: thanks to the cross-play feature , mobile gamers can interact with friends on PCs and consoles.

"Life is Strange" is a playable adolescent drama that does not just deal with issues like friendship, love, bullying and loneliness, but also supernatural events and magical abilities. With this mix, the game from the French developer Studio Dontnod on PC and consoles became the indie favorite. Meanwhile, it is also available as a mobile game and still moving.

There are a lot of digital trading card games and one of the best and most famous is "Hearthstone" by "World of Warcraft" maker Blizzard Entertainment. Build a deck of monsters, spells, and magical items and play against other players online. Play stronger cards, build your deck, and so on.

The "The Room" puzzles all work on the same principle: you are presented with a mysterious mechanism that you should open. Find the right switch and a new mechanism will appear. Gradually, an atmospheric story unfolds around occult objects and scary occurrences. "The Room: Old Sins" is the latest installment in the four-part series.

Since 2019, Apple has been offering a game subscription for iOS devices with Apple Arcade , which offers smartphone gamers a lot of value for money. For a small monthly amount you get access to a library of almost 100 games, which will be expanded in the future and is available exclusively through the service. All games are playable on iPhone, iPad and Mac at no extra cost and without advertising.

Here are three game tips from the Apple Arcade range: