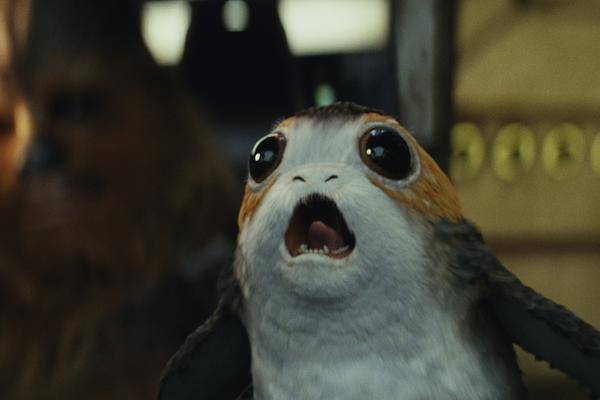 A few weeks separate us from the theatrical release of "Star Wars: Episode 9 – The Rise of Skywalker", in their excitement fans are obviously looking with the magnifying glass for clues to the final of the Star Saga. So it came to light that the cute Porgs probably celebrate their return in the new movie.

On the German Instagram profile of Star Wars, a new poster is the deciding hint: The Porgs, introduced in "Episode 8 – The Last Jedi", will also appear in "The Rise of Skywalker". At least on the left side, next to the iconic droids from the film series, is the silhouette of a porg.

In "Star Wars 8" a Porg stayed aboard the Millenium Hawk

The white-and-beige seabirds from the planet Anch-To have become very popular with many fans. When Rey left the planet along with Chewbacca in Episode 8, a copy of the Porg remained aboard the Millennium Falcon. No wonder the animals reappear in "Star Wars: Episode 9 – The Rise of Skywalker".

The illustrated poster for "Star Wars: Episode 9 – The Rise of Skywalker" should give it free in selected cinemas on the first day, as long as stocks last. The next and last part of the Skywalker series will start on December 18th in Germany.