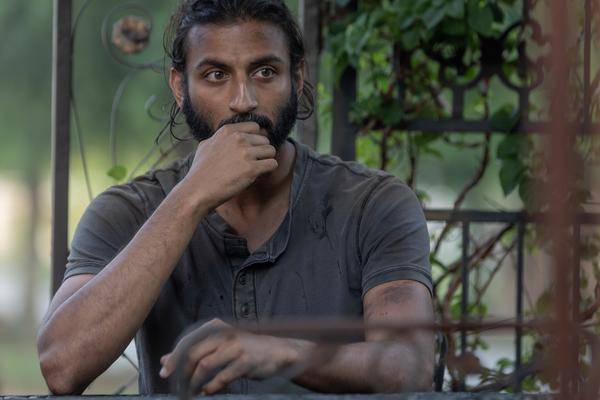 Siddiq still suffers from the encounter with the Whisperern – the first minutes of the upcoming "The Walking Dead" episode impressively show. Not even the work can distract him from his flashbacks.

The following news contains spoilers for Episode 7 of "The Walking Dead" Season 10. So you keep reading at your own risk.

At the same time, Siddiq has his hands full keeping the inhabitants of Alexandria healthy. Much of them lie flat with a nasty gastrointestinal infection. So Siddiq is busy running from house to house all day long, providing water to others and ensuring that they are on their way to recovery.

His everyday life is repeatedly shaken by flashbacks. In Season 9, he witnessed the Whisperer massacring his friends while Siddiq had to watch helplessly. Alpha, in particular, literally persecutes him – even during the day! Everywhere his silhouette appears to him, only to be gone the next moment.

In keeping with the latest "The Walking Dead" season, you can find detailed recaps of the individual episodes here.

"[Siddiq] has to deal with a few things, there's the fact that he's the only witness of what Alpha is capable of, so he has a responsibility to let the others know so that they can be up and running But he also has many guilt feelings, as the only one to have survived the massacre, "said Siddiq actor Avi Nash a few weeks ago on the AMC blog .

Season 10's latest "The Walking Dead" episode runs every Monday at 9:00 pm on Fox and is available for download via Sky Ticket.