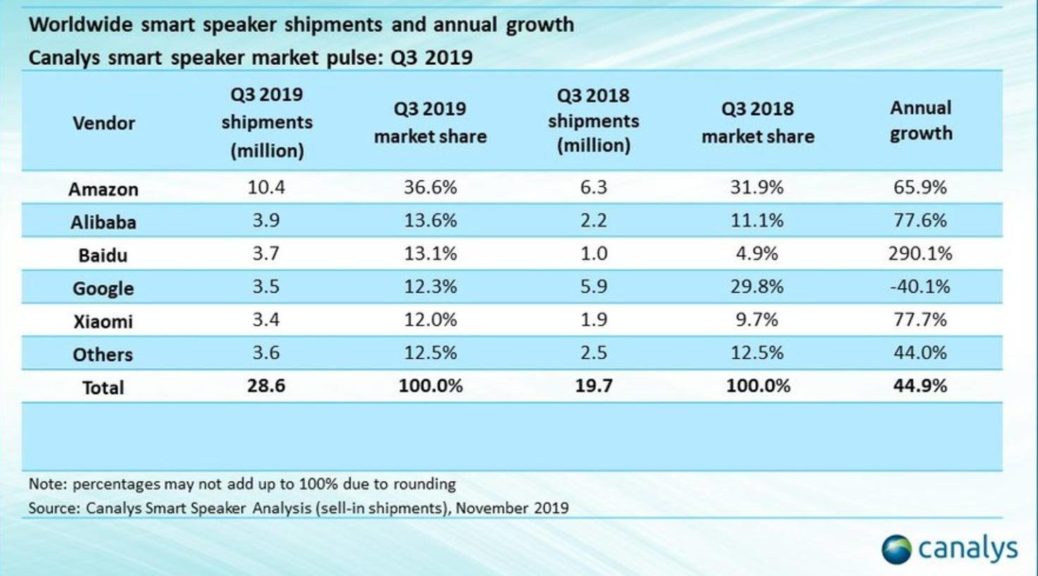 Google seems to lose the fight against its competitor Amazon in the smart speaker market in the long run. One study shows that sales of Google devices fell 40 percent in the third quarter compared to the previous year. Amazon and many Chinese manufacturers, on the other hand, were able to increase their sales.

The study was published by Canalys , a company specializing in technology market analysis. While Google, with its Google Home smartphones ( now known as Google Nest ) in Q3 2018, still ran a neck-and-neck race with 29.8 percent, the search engine giant is now beating only fourth behind the Chinese companies Alibaba and Baidu.

Google is slipping to fourth place this year.

While Amazon was able to sell 6.3 million Alexa-enabled smart speakers in the third quarter of 2018, it even had 10.4 million devices in the third quarter of this year. Thus, the online retailer can even increase its market share by almost 5 percent to a total of 36.6 percent. That should be due to, among other things, on the strong Prime Day and the back-to-school campaign by Amazon, according to Canalys.

Although Google was able to compete well last year and sell 5.9 million smart speakers, it only managed to sell 3.5 million devices in the third quarter of this year. That's a drop of around 40 percent and Google's market share drops to 12.3 percent. This leaves Google behind the Chinese companies Alibaba and Baidu.

Especially the search engine giant Baidu can be satisfied with the sales. The annual growth was a whopping 290 percent.

Has Google finally lost the battle in the smart speaker market?

The strong growth of the Chinese smart-speaker manufacturers is mainly due to the high demand in the Chinese and East Asian markets, in which Google will probably never get a foothold anyway. And outside of Asia, Google seems to be losing the fight against Amazon.

Apparently, users prefer to use the Google Assistant directly on their smartphone instead of putting a smart speaker with built-in voice assistant in their home. Whether Google ceases its smart speaker series at some point, remains to be seen.