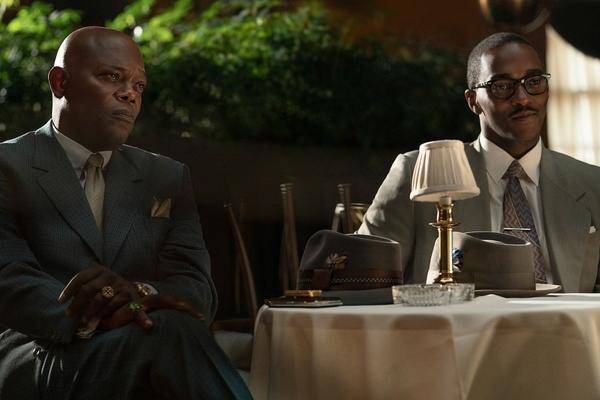 Apple TV + continues on big guns: Shortly after the start of the streaming service, there is the first trailer to see "The Banker". In the drama, which is based on a true story, the Marvel stars Samuel L. Jackson and Anthony Mackie are heroic in a very special way.

Jackson and Mackie embody two businessmen who want to live the American dream and strive for success. The problem: We are in the US of the 1960s, the establishment gives the African American entrepreneurs no chance. That's why they have to use a gag.

Nicholas Hoult as a straw man for Samuel L. Jackson and Anthony Mackie

To protect their emerging real estate and banking empire, Bernard Garrett (Anthony Mackie) and Joe Morris (Samuel L. Jackson) use White Matt Steiner (Nicholas Hoult) as their straw man. He serves as a figurehead, while Garrett and Morris pull the strings in the background and help African-American families realize the dream of home ownership.

To keep an eye on everything, the two appear in public as janitors and chauffeurs. However, as their company draws the attention of the government, it threatens everything that Garret and Morris have fought for.

"The Banker" -Cast draws from the Marvel Cinematic Universe

Samuel L. Jackson and Anthony Mackie have recently made a name for themselves as part of the Marvel Cinematic Universe (MCU). Jackson plays in the film universe Nick Fury, the head of US intelligence SHIELD Mackie in turn gives Sam Wilson alias Falcon, who fights with mechanical wings for the Avengers. Also Nicholas Hoult has experience with comic book adaptations. Since "X-Men: First Decision" for 20th Century Fox, he has been portraying the mutant Hank McCoy aka Beast.

"The Banker" will hit the US cinemas on December 6, before the drama will be released on Apple TV + at a yet unknown date.