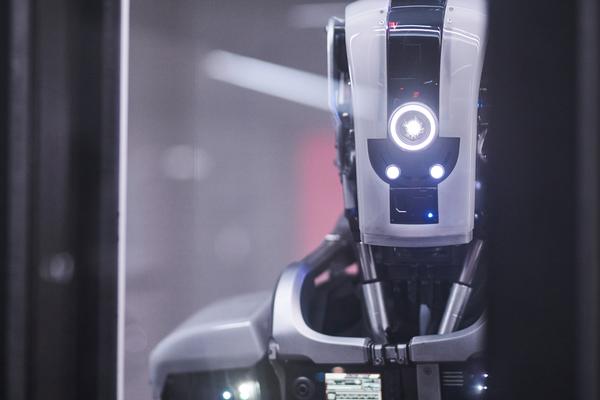 Artificial intelligence is entering more and more areas of everyday life, in sci-fi films KIs have been part of the repertoire for many years. Hollywood shows us where the journey in terms of intelligent technology could go – with often not very pleasing outcome for humanity. We have compiled ten films about Artificial Intelligence for you.

In some places we can not get around smaller spoilers unfortunately. So you continue reading at your own risk.

Such a smart on-board computer can be quite handy during a long journey through space. Especially when the human crew slumbers in sleeping chambers. But what if Artificial Intelligence develops its own life and does not submit to the instructions of its creators?

Director Stanley Kubrick was aware of this as a problem as early as 1968 and can raise his own philosophical questions. Lucky for us, with "2001: Odysee in Space" and the on-board computer HAL 9000, Kubrick gave us a milestone in the sci-fi movie!

What's worse than an artificial intelligence that controls a spaceship? An AI that can control all the computer systems in the world! And: Skynet is eager to wipe out all humanity. Since this is not fast enough without own body, the system uses the Terminatoren – the part of the reprogrammed Killerroboters T-800 brought Arnold Schwarzenegger the role of his life!

Speaking of reprogramming: Franchise creator James Cameron has at least a small glimmer of hope: As T-800 proves, man can still cheat the machines.

Since the Wachowkis gave us "Matrix" in the late 1990s, we keep asking ourselves in secret: was that just a déjà vu – or a mistake in the matrix? In any case, Agent Smith is one of the most unsympathetic incarnations of Artificial Intelligence in the entire sci-fi genre!

This is not just a matter of referring to the fact that he and his machines have been enslaving mankind for years and abusing it as living batteries. Agent Smith never tires of rubbing his antipathy against the human race. Because we long for the time when a toaster was really just a toaster …

Special feature of "AI – Artificial Intelligence": Here is not the one artificial intelligence above all, but each of the sophisticated "Mechas" has a pronounced awareness.

The tentative tip of this evolution is David, a robot who can build emotional bonds and feel emotions. That he also looks absolutely human does not make the distinction easier – and urges the viewer to ask: what exactly makes a person?

The KI Viki in "I, Robot" can almost be sorry: it is programmed by its creators to protect humanity and provide a safe life – and then, with our irresponsible behavior, we humans constantly drive them into the parade.

So what do you do? Take over world domination, of course! Of course only to protect ourselves from ourselves. When we think about it, our compassion for Viki is limited.

In "Moon", artificial intelligence is exceptionally on the side of the human protagonist – at least after some entanglements and a trick of the main character. It is also noteworthy that Gerty should not arouse our empathy through a human-like appearance – but expresses her emotions with the help of smiley faces. Somebody says emoticons are not an international language!

In most films about Artificial Intelligence, the technology will eventually gain control over their human creators – not so in "Her". Samantha, as the central computer system calls itself, learns more and more from the relationship with its human counterpart, Theodore, leaving their owners, who ultimately have a crush on them, to sit on other operating systems. That screams for a long round of Digital Detox!

Can artificial intelligence only become human through technical means? The film "Transcendence" with Johnny Depp answers this question – unlike several other representatives of the sci-fi genre – with a clear no. In order to still feel the AI, the upload of a living brain is necessary instead. That's what we call a symbiotic relationship between man and machine!

We know only too well from the sci-fi genre that we are aiming for world domination at a certain level of intelligence. Ava does not want to be that high in "Ex Machina", but for the two human protagonists of the film the self-realization of Artificial Intelligence has very unpleasant consequences. And the moral of the story? Do not trust a super-intelligent computer, even if it comes with the face of Alicia Vikander !

Although "mother" appears in "I Am Mother" most of the time only in the form of a robot, but at the end of the film, we learn that it has a much wider impact as a cross-computer system. Not only that: As in many films about Artificial Intelligence, the creators present us with an AI that almost completely wipes out humanity. A reboot also helps against quirks in the computer, right?