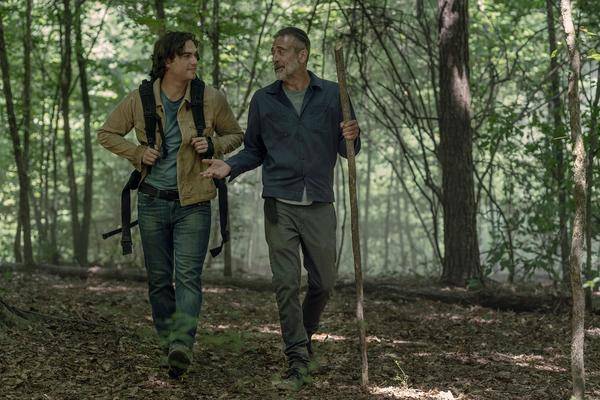 In episode 4 of the tenth season of The Walking Dead, Negan found his way to freedom. The trailer for episode 5 shows that he does not stay alone for too long.

The following news includes spoilers for Episodes 4 and 5 of the tenth "The Walking Dead" stats. You continue reading at your own risk.

Gone are the days when the former leader of the Saviors died his life as a prisoner in Alexandria. An unknown person released Negan in the last episode after his unpleasant clash with Margo. This newly won freedom seems to want to enjoy the ex-villain in Episode 5 now for the first time. For a long time, however, he does not go undetected. He quickly encounters a boy named Brandon, who has apparently been following him for quite some time.

Whether he is a spy for the Whisperer, or one of the "Negan fans" who have already teased the content of the first episodes of Season 10, remains to be seen. Since the Whisperer are prominently represented in the clip, the likelihood seems more likely to speak for a stooge Alphas, of which, according to showrunner Angela Kang some may have infiltrated in Alexandria.

In keeping with the latest "The Walking Dead" season, you can find detailed recaps of the individual episodes here.

Kelly and the Whisperer

In the coming week, Connie's sister Kelly, who appears to have disappeared in the woods, seems to be in trouble again. Since the beginning of the season, it's clear that she is gradually losing her hearing – which makes the whole situation a little bit harder. And: According to the trailer, Connie's search for her sister is not a quick success. Is Kelly in the hands of Whisperer before Connie reaches her? The next episode will show it.

Season 10's newest "The Walking Dead" episode will air on Fox every Monday at 9:00 pm and will be available for download via Sky Ticket.