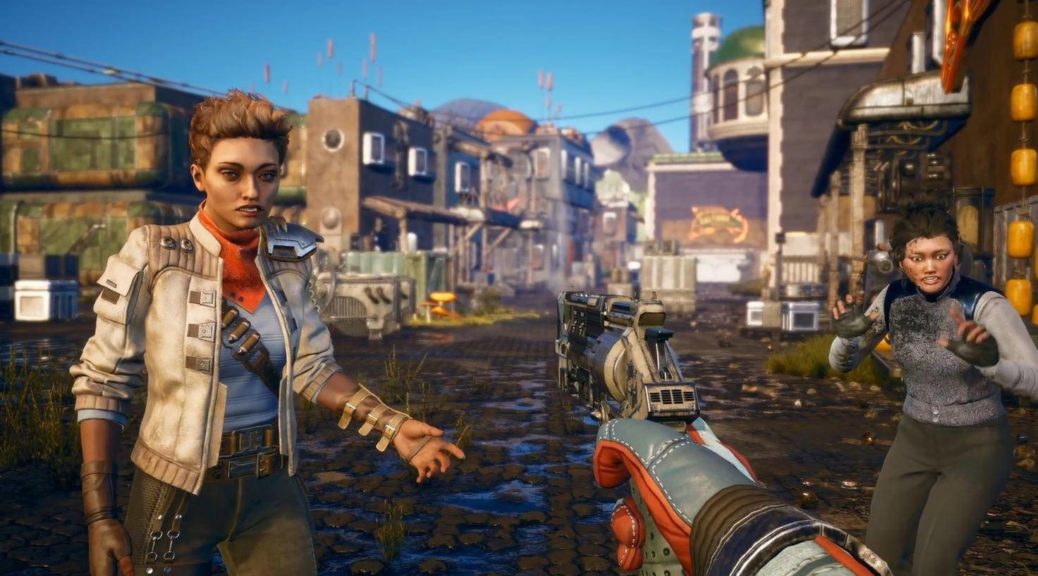 "The Outer Worlds" is a space western of a special kind: In the role play, which is available since October 25, 2019, you determine in dialogues and battles yourself about the fate of your character, traveling to distant planets. Everything worth knowing about the game from the RPG pros Obsidian Entertainment you can read here.

What is "The Outer Worlds"?

"The Outer Worlds" takes place in a future in which humanity has colonized foreign planets. The distant worlds are governed by almost all-powerful corporations that permeate every aspect of daily life. You strand in the space colony of Halcyon on the edge of explored space and embark on a bizarre journey.

In "The Outer Worlds" the word "RPG" is capitalized: Developer Obsidian Entertainment promises an adventure in which you decisively shape the progress of the story through your decisions. You play your character in the ego perspective and form it completely according to your wishes – for example, by giving yourself diplomatically in dialogues or "arguing" with the firearm.

Oops! Nobody is immortal in "The Outer Worlds" …

A special feature is that your character not only has positive attributes such as strength or intelligence, but also can acquire character flaws. This creates unpredictable situations: a hero who is afraid of robots must fight his own problems in a technologically advanced future …

Who should play "The Outer Worlds"?

Obsidian Entertainment is known for epic role-playing games. The studio has developed "Star Wars: Knight of the Old Republic 2", "Neverwinter Nights 2" and the two "Pillars of Eternity" parts – and "Fallout: New Vegas"! With the spin-off of the wasteland role-playing series, the Americans collected many sympathy points. "The Outer Worlds" is reminiscent visually and in gameplay partly clearly the series, whose other parts were developed by Bethesda Softworks.

For those who love the weird, satirical humor and role-playing aspects of "Fallout" and are disappointed with the multiplayer theme of the current "Fallout 76" section, "The Outer Worlds" is a good substitute. In general, the game is recommended to anyone who likes to intervene in the action itself and direct the action through momentous decisions. Even fans of games like "Mass Effect" or "The Witcher" come at their expense.

Is there a german voice output?

English skills are an advantage: "The Outer Worlds" has full-sounding dialogues, but no German voice output. So you hear the English speakers. But: There are German subtitles.

Platforms: Where can I play The Outer Worlds?

The Outer Worlds is available for PS4, Xbox One and PC. Xbox Game Pass users can download the game to PC and Xbox One at no extra cost. On Steam, the title is currently not available, a release on the platform should follow in 2020. A version of "The Outer Worlds" for Nintendo Switch is in progress, but there is no date for release yet.

Playtime: So long is "The Outer Worlds"

As a sweeping role-playing game, "The Outer Worlds" will take you some time. You can count on 30 to 40 hours of play time – depending on how stringently you follow the main story and how many side quests you solve. Since the story is widely branched out, "The Outer Worlds" can also play well several times: If you make other decisions, your adventure may be quite different.

By the time you've explored every corner of the outer worlds, a few hours will go by.

"The Outer Worlds" is on PS4, Xbox One and PC each about 40 GB in size. This includes a Day-One patch that you need to download and install after downloading the main game or installing it from a disk.

On PS4 and Xbox One, "The Outer Worlds" runs at a resolution of 1920 x 1080 pixels and at 30 frames per second (FPS). On PS4 Pro and Xbox One, the game runs in 4K resolution and also at 30 FPS. A performance mode that would allow 60 FPS on the stronger consoles does not have the game.

DLC: Will "The Outer Worlds" get more extensions?

Larger extensions or DLCs to "The Outer Worlds" Obsidian Entertainment has not yet announced. In general, there is no additional content for the RPG – so no micro-transactions or Lootboxen.

… and no new colorful skins for the local alien fauna.

Multiplayer: Does "The Outer Worlds" have a multiplayer mode?

In reviews of the trade press "The Outer Worlds" is mostly praised. On the Metacritic website, which averages various test scores, the role-playing game for the release stands at 82 out of a possible 100 points – a value that speaks for a good to very good game.

The critics are impressed by the in-depth role-playing game that makes the game possible, as well as the wide-ranging story. The humor and the dystopian game world are also plus points. The controller and the weapons gameplay serve their purpose and are in the opinion of some testers even better than they would have to be for a role-playing game of this kind.