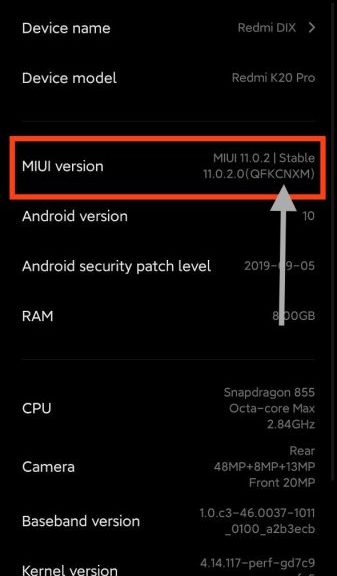 Lately we are frequently asked how to differentiate if your Xiaomi smartphone has a version of MIUI Global , European or China . Whether to request entry to the Mi Pilot program or even to download an update manually, we need to know exactly which MIUI ROM is the one that has our device installed.

That is why we will now explain the easiest way you have to discover that the exact version of MIUI is the one that has your device installed . An extremely simple process that does not go beyond checking the MIUI compilation number in the terminal settings.

How to check the MIUI version of your Xiaomi

To check the version of MIUI installed on our device, simply access the Settings application followed by the section « On the phone «. Once inside we will look at the MIUI compilation name that appears in the section « MIUI Version «, as we can see under these lines.

Once the version is located we will have to look at the final part composed of several letters. In between them appears the exact version of MIUI that we have installed. Depending on these letters the version will be:

As a curiosity, in Europe we can find two types of ROM, either the Global (MI) that usually comes installed in all those terminals that we buy from China in GLOBAL and the European version (EU / EEA) which is the one that is predetermined when we buy the device in Europe.

The difference does not go beyond that the EU version is fully adapted to the requirements, be it licenses, regulations, etc. of the European Union . Of rest, versions are practically identical , counting on the same operation and final level of updates.