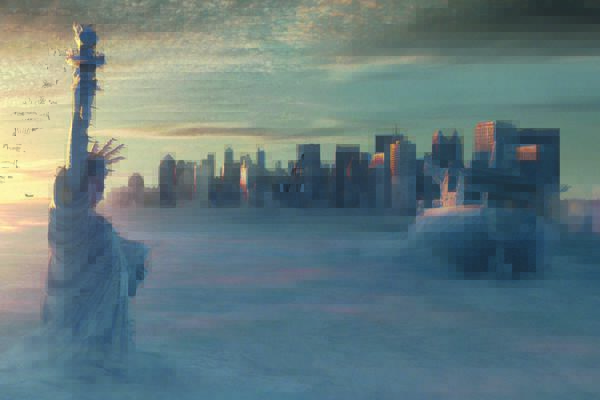 When the screen crashes and clatters and an end-time scenario with a patriotic happy ending is presented, there's a good chance that director Roland Emmerich was at work. His fondness for sci-fi films and heroic stories combined with bombastic CGI effects runs through all his feature films. We have listed the 13 best-known Roland Emmerich films here for you.

The first serious movie Roland Emmerich made a name for was Universal Soldier. With the cast of Jean-Claude Van Damme in the lead role, he contributed to the hype surrounding his person, who began in the late 1980s.

In "Universal Soldier" Jean-Claude Van Damme plays a soldier who died in the Vietnam War. As part of a secret program, however, he is brought to life 23 years later as a cyborg killing machine to life.

The Egyptologist Dr. Jackson (James Spader) is asked by the military to investigate a secret artifact on the Egyptian Giza Plateau. Quickly, the object turns out to be a portal to other galaxies built by aliens. Together with the military Jackson goes through the gate and explores the desert planet behind. There they meet a people oppressed by the Egyptian sun god Ra, who want to liberate them.

In his sci-fi blockbuster "Independence Day", Roland Emmerich already showed what runs like a thread through his following films: The director loves end-time scenarios, which he can bring to the screen with lots of action. In 1996, they are aliens who want to go to Earth with their gigantic spaceship and wipe out humanity. Captain Steven Hiller (Will Smith) of the Marine Corps wants to put an end to the invasion.

Among the total of 35 "Godzilla" films is one by Roland Emmerich. Born in Stuttgart, the director lets the giant lizard trudge through New York and confiscate the Madison Square Garden for her offspring. The unauthorized entry, however, promptly calls in the military, which tries by all means to promote Godzilla to the afterlife.

Roland Emmerich does not always shoot science fiction blockbusters. In 2000, he dedicated himself to the time when the American Revolutionary War (1775-1783) took place. The focus is on the seven-time family man and widower Benjamin Martin (Mel Gibson), who tries by all means to protect his children from the war. His son Gabriel (Heath Ledger) still joins the American troops – and is accused of espionage after some time. Through several fatal events, Martin suddenly becomes a leader of the army from the father of a family.

The world is facing a dramatic climate change – this haunting warning is pronounced by paleoclimatologist Jack Hall (Dennis Quaid) during a climate conference. However, he encounters so little understanding, let alone interest. But that's changing as severe natural disasters occur all over the world.

Jack's son Sam (Jake Gyllenhaal) is in the middle of New York City during such a catastrophe. First a gigantic tidal wave breaks over the million metropolis, then a superstorm approaches, its eye freezing within minutes. Jake takes the arduous road to New York in order to get to his son as soon as possible.

As the title suggests, this adventure film by Roland Emmerich is set 10,000 years before Christ. In the prehistoric setting grows the mammoth hunter D'Leh, who falls in love with the beautiful, but mysterious Evolet. When this is abducted by another tribe, D'Leh does everything to free his mistress from the clutches of the tyrant.

According to the Mayas, the earth should sink in 2012. Well, if that's not a perfect topic for a new movie by Roland Emmerich. In the blockbuster with John Cusack and Thandie Newton in the lead roles, the Central American people are right. Similar to "The Day After Tomorrow" terrible things happen all over the world. Earthquakes tear gaping gorges into cities, volcanoes erupt, whole parts of the earth disappear in the water. Right in the middle: Family Curtis. But there is hope: The government should have built giant arks, with which Chosen ones can survive the disaster. The Curtis family strives to secure a saving place.

"Romeo and Juliet", "Hamlet", "Macbeth" or "Othello": All these classics are said not to have been written by William Shakespeare. So at least are several authorship theories around the writer. "Anonymus" follows the Oxford Theory, which states that Edward de Vere is the author of the masterpieces. The film plays during the lifetime of Queen Elizabeth I in the 16th century, which is why it also goes to the question of the successor to the throne and the Essex rebellion. Ironically de Vere is supposed to be a non-marital offspring of the queen.

A scenario that has been tackled twice in 2013: The White House is under attack and it is up to a single person to save the US President and the entire country. In the version of Roland Emmerich it is Channing Tatum, who comes as bodyguard John Cale in the middle of the attack of a paramilitary unit. By chance, he meets President Sawyer (Jamie Foxx) in the historic building and saves his life more than once.

The Stonewall Inn on Christopher Street has been one of New York's best-known gay dating sites since the 1960s. Greater notoriety reached the bar when there in June 1969, the Stonewall Uprising took place, through which a year later, the Gay Pride moves evolved.

Roland Emmerich is dedicated to this topic and tells the story of a gay young man who is rejected by his family and moves to New York. He hopes to live his love of men freely. But then, as a result of harassment from the police, there are riots that culminate in the 1969 uprising.

20 years after his cinema hit "Independence Day", Roland Emmerich continues to tell his science fiction blockbuster – but without Will Smith. Once again, extraterrestrial beings are about to lay the earth in ruins. Jake Morrison (Liam Hemsworth) is now focusing on a new character. He is a former fighter pilot and conveniently engaged to the daughter of the former US president. Morrison also has every reason to be angry with the aliens: during the attack twenty years ago, his parents were killed. So he does everything in his power to finally transport the aliens to the afterlife.

In "Midway" Roland Emmerich lets it crash again: The director recounts the well-known naval battle in the middle of the Pacific at the Midway Islands, which was held between June 4 and 7, 1942 between Japanese and US forces. Although the strategic value of the islands was manageable for the US military, the battle was to have a significant impact on the outcome of the US-Japan war.