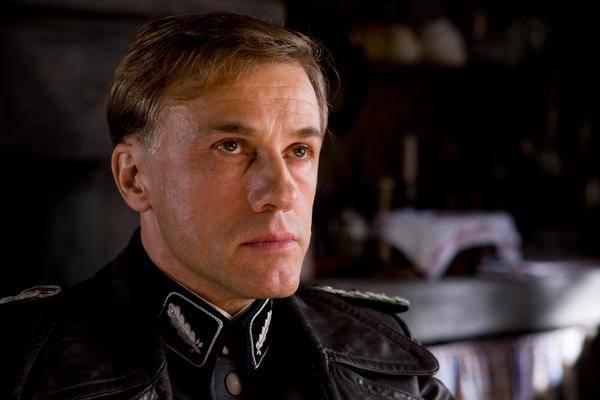 Christoph Waltz has long been a well-known name in German-speaking countries. That the native Viennese now knows all Hollywood, he has to thank chief cult director Quentin Tarantino. He had cast him in 2009 for "Inglourious Basterds" as SS-Standartenführer Hans Landa. Since then, Christoph Waltz has played, among others, in the following twelve Hollywood films.

"That's a Bingo!", Says Christoph Waltz as Hans Landa in "Inglourious Basterds". For the Austrian, the cast should actually be an absolute hit, because he received for his outstanding performance of the SS man Hans Landa an Oscar for Best Supporting Actor.

In the film of Quentin Tarantino he goes in Nazi-occupied France during the Second World War in the hunt for Jews. Among other things, he erases almost the entire family Dreyfuß – only the little Shoshanna can escape. Meeting twice a day in life, Shoshanna, now grown up (Mélanie Laurent), learns that Landa will be a guest in her cinema during an SS major event – and she's making a deadly plan.

Christoph Waltz does not like to play popular characters, because in "Water for the Elephants" he embodies a real disgust. In public, August Rosenbluth (Christoph Waltz) is a friendly ringmaster, but behind the scenes he tends to commit acts of violence. He also does not shy away from throwing employees off the train if they behave the wrong way.

The situation escalates after he ceases Jacob Jankowski (Robert Pattinson) and begins an affair with Rosenbluth's wife Marlena (Reese Witherspoon).

A film starring Christoph Waltz, also released in 2011, is a black comedy by Roman Polanski based on the play of the same name by Yasmina Reza. "The God of Carnage" plays most of the time in just one room, in which the two couples Nancy and Alan Cowan (Kate Winslet and Christoph Waltz) as well as Penelope and Michael Longstreet (Jodie Foster and John C. Reilly) on a dispute of their Want to entertain sons.

But the initially harmless conversation degenerates quickly and escalates in mutual insults that everyone hands out against everyone. The initial politeness quickly gives way to cynical comments, reproaches, and smarties, and the supposedly grown-ups show that they behave no better than their children.

Also in "Django Unchained" Quentin Tarantino relies on Christoph Waltz – and the Austrian brings his performance the second Oscar for Best Supporting Actor. This time, Waltz gives the bounty hunter dr. King Schultz, who frees Django (Jamie Foxx) from slavery and wants to kill with him the known as Brittle Brothers slave owners. If the order is successful, Schultz wants to give Django the final freedom. So he can save his wife Brunhilde (Kerry Washington) from slavery. Slave driver Calvin Candie (Leonardo DiCaprio) wants to prevent this, however, at all costs.

Christoph Waltz embarks on a search for the meaning of life in the fantasy drama "The Zero Theorem". Computer genius Qohen Leth is working on researching a mathematical formula that aims to provide an answer to the meaning of life. He does this for an anonymous company whose board is known only as "Management" (Matt Damon). Management spies on its employees with installed cameras in their homes. Leth forges a plan to flee to a deserted island with the mesmerizing yet mysterious Bainsley (Mélanie Thierry).

In the sequel to the film of 2011, Christoph Waltz's friends Nick (Jason Bateman), Dale (Charlie Day) and Kurt (Jason Sudeikis) as Bert Hanson, head of a mail-order business, destroy their heart project. He claims to be a potential investor in the trio's newly invented product just to ruin it and secure the patent. That does not let the friends sit on and plan to abduct Hanson's son.

In "Big Eyes", Christoph Waltz collaborates with cult director Tim Burton for the first time. The film is based on the life of the painter Margaret Keane, whose trademark is to paint people with huge eyes. Her work became known in the 1960s, when her husband Walter (in the movie played by Christoph Waltz) pretended to be the creator of the pictures.

When the marriage of the two breaks, Walter Margaret sued. In court, both are asked to paint a big-eyed picture to clear the final copyright.

Which actor does not even want to play a real-life Bond villain during his career? Christoph Waltz received this honor in Sam Mendes' "Specter". In it he embodies Blofeld, who appeared in earlier "James Bond" films – but then was played by another actor. During the filming of "James Bond: No time to die" it became known that Christoph Waltz would resume his role as Blofeld in this part as well .

If a story has been adapted countless times, then that of Tarzan. But not every filmmaker gets the original ideas out. In 2016, "Harry Potter" director David Yates took on the subject and sent Alexander Skarsgård swinging through the jungle, swinging lianas. Christoph Waltz in turn plays – how could it be otherwise – Captain Léon Rom, the accomplice of King Leopold II. This brings Tarzan as a result of a deal back to London. Some time later, Rome arranges a meeting in Tarzan's home with his wife Jane (Margot Robbie) – and lures them there in a nasty ambush.

What to do if overpopulation prevails and threatens a shortage of resources? Right, people are shrunk to a size of twelve centimeters. Christoph Waltz plays in the film by director Alexander Payne ("The Descendants") no major, but an entertaining supporting role. As Dušan Mirković, a women and alcohol loving European, he undergoes the new shrinking process and meets Paul Safranek (Matt Damon). Although they enjoy the luxurious life in the secluded miniature society called "Leisurelands", but decide to travel together to Norway. There they would like to pay a visit to the original colony of mini-humans.

Dr. Dyson Ido (Christoph Waltz) finds the remains of a female cyborg and takes them home. He gives her the name "Alita". After his foster daughter has awakened, she lacks any memory of her past. Suddenly she is pursued by Robo killers without knowing the reason – and discovers she has extraordinary abilities.

With "Georgetown" Christoph Waltz presents his first directorial work, in which he also takes the lead role. The film is based on true events and tells the story of the life of the impostor Ulrich Mott (who was actually called Albrecht Muth). His biggest wish is to be a part of high society. He comes closer to his goal when he marries the rich and much older widow Elsa Brecht (Vanessa Redgrave) and enjoys life in the lap of luxury. Although Elsa is extremely fit despite her 70 years, she is suddenly found dead. The police and Elsa's daughter Amanda (Annette Bening) are certain: Ulrich has killed the old lady to get her money.