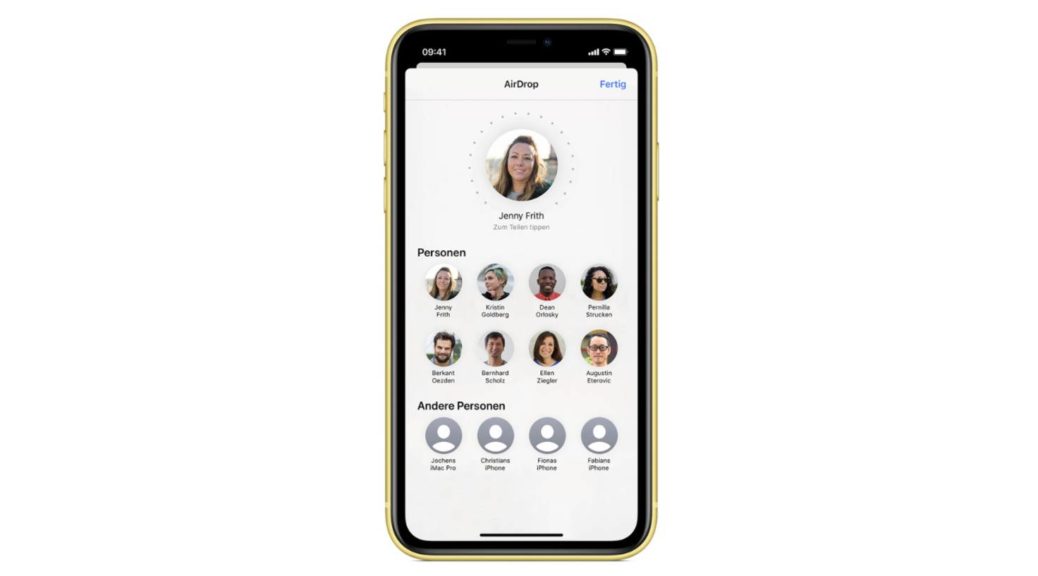 In the iPhone 11, iPhone 11 Pro and iPhone 11 Pro Max sits each of the new U1 chip from Apple. It uses ultra-wideband technology and opens up new possibilities. This does not just include the AirDrop file transfer. In fact, the U1 chip is Apple's real innovation of the iPhone 2019 generation – and that's its potential.

The Apple U1 heralds a new development. It's the first time that ultra-broadband is being used in a smartphone. Apple did not even mention the technology at the 2019 Keynote, though it was probably the occasion for the keynote motto "By innovation only." Presumably, this is because most of the potential applications for the U1 chip are not yet available. First of all, the iPhone 11 generation only manages to locate other Apple devices in the immediate vicinity, allowing easy file sharing with AirDrop.

Apple uses the U1 chip first for finding other iPhones and sharing data via AirDrop.

As such, Ultra Wide Band ("UWB") is not a new technology, in fact it has been around for decades. So far, however, it has been largely limited to industrial applications. For example, in department stores products are tagged with UWB tags so they can be easily located. The range of UWB is usually 10-50 meters, according to Apple, it is with the U1 chip but 290 meters. The frequency range is between 3.1 and 10.6 GHz and the data transmission takes place at a speed of 480-1.320 Mbit / s.

What are the advantages of ultra wide band?

UWB is in the same frequency range as Radar, Bluetooth, WLAN and 5G. So these are radio waves in a broad sense. The special feature of UWB is that a low transmission power of a few milliwatts is distributed over a very large frequency range. One disadvantage of the technique is its short range, but there are also some advantages. So UWB is more accurate than the other transmission methods such as Bluetooth, so a more precise location is possible. Strictly speaking, UWB can locate objects within a 30-centimeter range, while Bluetooth can detect objects within a range of 1 meter.

The transmission speed is four times as high as with Bluetooth, it is around 8 Mbps for mobile devices. Because UWB operates on a wide frequency band, the electromagnetic waves can pass walls more easily than WLAN. Every 100 milliseconds there are updates about the position of an item with UWB – and UWB does not get in the way of other radio signals like Wi-Fi or Bluetooth.

For these reasons, Apple calls UWP "GPS in the living room scale".

Why was there no UWB in smartphones so far?

Before the iPhone 11 smartphones, there were no cell phones with ultra-wideband chip.

It is similar to Face ID: The technology behind it is quite expensive and so it could only be installed in a smartphone that has a price that also pay enough customers: the iPhone. That being said – and this is now a challenge for Apple – UWB is not yet established in the consumer space, while several Bluetooth devices such as headphones, speakers and key find tags are available.

What is possible with UWB?

Early iOS 13 builds suggest that Apple is working on a Tile competitor, as 9to5Mac writes. Items like the keychain could be tagged with an Apple tag, and they could then be located on the iPhone. According to MacRumors , there could be an augmented reality application that shows a balloon hovering above the lost object.

Conceivable is the possibility to unlock cars with the U1 chip in the iPhone. Volkswagen and NXB have presented a UWB system for this purpose, according to EETimes . Apple has already patented an UWB version of its iBeacons, as Patently Apple writes, so interesting or important locations could be located using the U1 chip.

Jason Snell writes on other possible applications on Six Colors . If desired, a multiroom system would only play music where the iPhone owner is currently. If the occupant approaches a smart door, then it could automatically open, automatically close when leaving the apartment. Also in the navigation in buildings UWB tags could help and point approximately the direction to an office or meeting room. For which applications Apple ultimately decides, but still has to show.