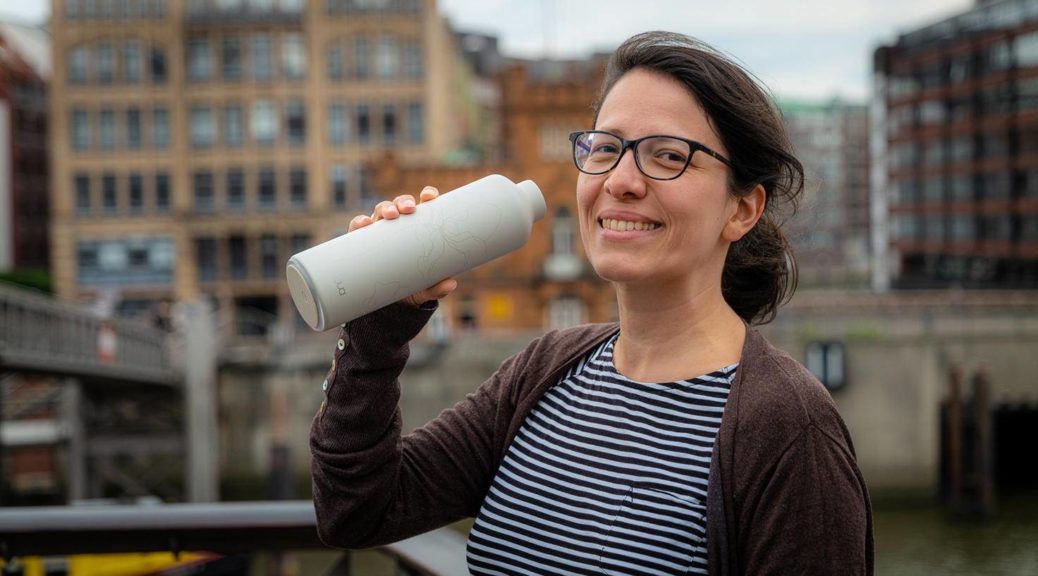 I drink too little. It's been like that forever. In the morning I can put a full bottle of water on the office table – and in the afternoon I am amazed that the bottle is still almost full. That's why I'm trying out Equa Smart: The smart water bottle is supposed to remind me daily for a week, to drink regularly and adequately.

At first glance, the Equa Smart looks like a normal stainless steel thermos bottle. At the bottom of the bottle, however, there is an annular tracker. He uses a motion sensor to calculate how much I drink – and reminds me by lighting it when I forget it.

Important data at a glance

My first day with Equa Smart starts a bit hectic – my fault. Overnight, I charged the tracker unit via micro USB cable. Now I put it on the bottom of the bottle. But wait: Before I use the bottle for the first time, I should rinse it according to the manufacturer with soap and water. So tracker unit again, and under the tap.

Luckily I downloaded the Equa app the night before. Before connecting it to the tracker via Bluetooth, she wants to know a few things: gender, name (optional), age, height, weight and level of activity. It almost feels like setting up a fitness tracker. From the data, Equa Smart calculates my daily drinking goal of 2,240 milliliters. Just under two and a half liters a day, that should be done.

In the office, the pretty bottle attracts admiring glances, especially among the ladies. No wonder, after all, I have chosen the motif Smart Mrs. Glossy. In this design, the bottle has a light sand color with a filigree floral motif. If you like it less playful, you can fall back on a simple model in white or dark gray.

On the first day, I am so motivated that Equa rarely needs to light up. Again and again I grab the bottle. Nevertheless, it takes some getting used to in the office and drinking directly from the bottle at home. On the way I do that, no question. But at home I would prefer a glass. But all habitual thing.

The next morning, I almost automatically reach for the Equa Smart. So that she measures the drunk values as accurately as possible, I always have to empty them completely and then refill them. So I fill it up and drink my first sip of water of the day. Fortunately, the smart bottle is completely leak proof: I carry it all week in a backpack, and there is not a drop next to it. I am still so motivated that I reach my goal of 2,240 milliliters at noon.

The Equa Smart bottle is my constant companion this week.

Could also have to do with the frequency in which I am reminded of drinking. I have set them in the app to "intensive". This means that she will report every 30 minutes if I do not drink in the meantime. If that's too much, you can increase the interval to 60 minutes ("normal") or turn off the glowing notifications altogether. But I think they do not bother. And my colleague who sits next to me and perceives the glow from the corner of my eye, does not feel bothered. In the application I can also specify in which time window should be reminded: about Monday to Friday from 8 to 22 clock and on weekends from 10 to 24 clock.

Incidentally, I test a smart feature of the Equa: If I tap it, it lights up. On the basis of the light I know immediately how it is ordered to my water balance. If it flashes once, I have drunk enough. If it shines three times, it was not enough. Practically!

After the showcases of the past two days, I am convinced that this will continue. But after a stressful day at work, there is the big surprise in the evening: I have just reached half of my goal. That I drank so little, I did not notice. The lighting of the bottle apparently not.

Another insight: After work, I often forget the bottle in my backpack – and do not miss it. Conversely, this means that I drink almost nothing at home – apart from the obligatory glass of water before going to bed, for which I do not strive for the Equa Smart. Not good …

Okay, today I want to pull myself together again. It runs well until noon, at least I have already drunk a liter. Today there is a special feature: I go to aqua fitness in the evening. So I will be more active than normal. As an activity level, I had entered the setting "not very active". Based on that, the app has calculated my drinking goal.

So close and yet so far: Unfortunately, I have not always reached my daily drinking goal.

But Equa also thought that on some days you are more active than others. I'm typing on "active day" that day, and my drinking goal is already rising to 2,830 milliliters. So far so good. Unfortunately, that just makes my failure bigger. Even if I am practicing hard in the water, I take too little fluid to me. I can not even make two liters. Maybe I would need a beep next to the lights.

By the way: In addition to the additional sporting activity, you can also register in the app if a particularly hot day is imminent. Even then, the drinking goal increases. Since we are in the middle of autumn, that was (unfortunately) not necessary in the test.

The autumn sends greetings, it is chill. The ideal opportunity for a test of whether the Equa Smart is in another area, what it promises: It should keep drinks hot for 24 hours cold or twelve hours thanks to double-wall insulation. I pour boiling hot tea into the bottle and drink it drop by drop over the day. And yes, after several hours, it is still as hot as it was at the beginning.

As with water: I prefer to drink from a teacup than from the bottle – also because of the risk of burns. The opening of the bottle is the way big enough for a tea bag, ice cubes fit into it. Incidentally, the Equa can also be put in the dishwasher without lid and tracker.

The practical handle of the Equa Smart did not survive the test week.

When I take the bottle out of my backpack in the evening, I experience a moment of shock. The practical handle, according to the manufacturer of electroplated metal, has broken through. Really a pity, as it makes wearing easier and makes the Equa particularly chic. At a price of over 70 euros very regrettable. After all: My drinking goal I have finally met again today!

Saturday & Sunday: Where was the bottle again?

At the weekend I treat the Equa as a disgrace to my disgrace. I am not much at home and am also provided with tea, water and other drinks with friends and family. It seems rude to me to get out my smart bottle. And as long as I drink something, everything is fine. The amount of fluid is just not detected by the tracker. Whether she was sufficient, I can only guess. At least in the morning and in the evening I use the smart bottle but. Incidentally, the battery is still completely full after a week, according to the app – not bad.

For my walk on Sunday, I remove the tracker unit and leave it at home. Whether the bottle shines in the backpack, I can not see anyway.

Since the Equa Smart can shine as she wants: At the weekend, I prefer to grab the glass.

On Sunday evening I find the time to test a little extra of the Equa app: a guided breathing exercise. I wondered at the setup to find this feature in the application. But breathing is at least as important as drinking, right? There we have the perhaps striving context. The exercise itself is a bit disappointing. It is a 35 second breathing exercise: inhale, hold, exhale. Nice is just that the Equa supports the exercise visually. When inhaling it lights up, while holding it lights up nicely, and when you breathe out the glow slowly goes out again.

Achieved drinking goal: by Equa Smart only about half of the 2,240 milliliters (but actually much more)

My week with the Equa Smart went by quickly. While I was quite motivated at the beginning, the enthusiasm decreased already in the middle of the week. Real benefits have shown the smart bottle only briefly, then I fell back into old patterns of behavior. But that's probably a type issue as well.

Thanks to the Equa Smart I could see that I hardly drink anything in the evening. That's why I now go over to always have a full glass in sight. I also realized that I do not want to drink from a bottle all the time. Perhaps Beurer's drinking manager , introduced at this year's IFA, may be the better choice. It can also be used with glasses, cups and other vessels. Free alternative: drinking apps for the smartphone, which remind you to drink for free.

The bottom line is the Equa Smart as well as many other smart gadgets that are currently springing up like mushrooms: The bottle may be helpful for some people, but the Equa is not really necessary. At a price of 74 euros you also think twice about whether the purchase is actually worthwhile. By the way: If you liked the design of the Equa Smart, you can also buy it cheaply without a tracker unit. Pretty and practical, the thermos bottle is also without smart technology.