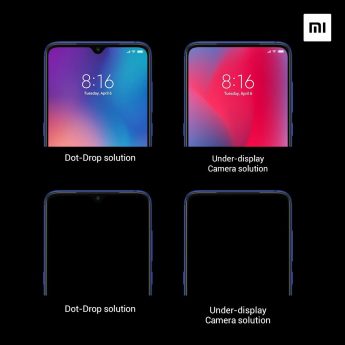 Some time ago Xiaomi showed us its first smartphone prototype with front camera under screen . A new technology that allows to get rid of the criticized notch, as well as the new retractable pop-up camera systems, integrating the selfie camera completely and under the front panel of the smartphone.

Specifically, Xiaomi showed a smartphone prototype based on the current Xiaomi Mi 9 , which had “trimmed” its notch in the form of a drop of water, in order to house the front camera under the screen. In this way, a true “ all screen ” is achieved, a goal that virtually all mobile phone manufacturers have tried to achieve by sliding systems, pop-pup cameras or even cameras embedded in the middle of the screen.

Now, further fueling the desire to discover how the Xiaomi Mi Mix Alpha will finally be, the company has published a new image on Twitter and Weibo. In it, as we can see under these lines, it does not imply that this new device will not have a pop-up camera , eyebrow-type notch or even a water drop-shaped notch .

A new detail that leaves open the possibility that finally this new member of the Mi Mix range becomes the first Xiaomi smartphone to incorporate an on-screen camera . A great leap in terms of innovation is concerned, which would undoubtedly maintain the innovative spirit that this Xiaomi range represents.

How do you integrate a camera under the screen?

According to Xiaomi, the screen area under which the selfie camera would be located would be completely transparent , thus achieving clear snapshots and without any shadow caused by the screen itself.

Specifically, this is achieved thanks to a new technology that allows the screen area where the camera is located to become transparent once the Camera application is accessed, thus allowing the light to reach the photographic sensor located under this. 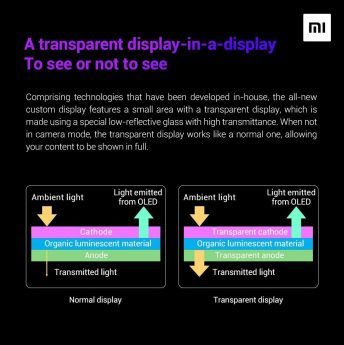 In addition, as Xiaomi adds, the screen itself works at the same time as a lens , that is, when it becomes transparent, this is one of the last lenses that allow the entry of light into the photographic sensor, also allowing the size of camera is somewhat smaller thanks to the use of the screen itself. 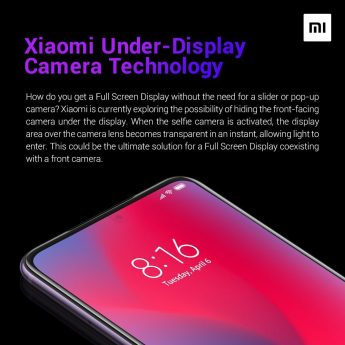 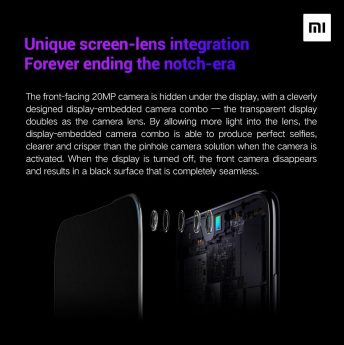 Without a doubt, a new technology that seems to be much closer than expected . Even so, we will have to wait and see with which model of Xiaomi's extensive smartphone catalog, this new selfie camera will arrive under the screen .