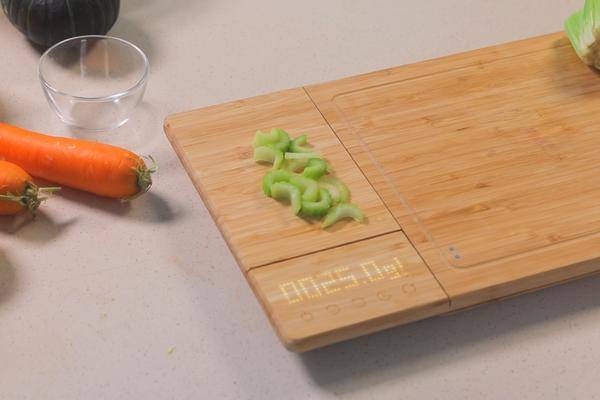 More and more household appliances and kitchen helpers are getting smart features, now it's time for the kitchen board: A start-up presents a cutting board with clever additional functions on Kickstarter.

The Chopbox is a kitchen board that also serves as a digital kitchen scale and timer. In addition, you can sharpen and sterilize your knife with the cutting pad.

Kitchen scale and timer directly on the cutting board

At first glance, the waterproof bamboo cutting board looks inconspicuous. On closer inspection, the tripartite surface is noticeable. The larger area serves as a traditional chopping board, while the two smaller spaces on the left hide the smart features. On the bottom left is an LED panel with five control buttons, above it the kitchen scale.

After switching on the Chopbox via the Powerbutton, you can place and weigh the cut ingredients in the upper field. The weight shows you the LED field. If you activate the timer, the time counts down on the digital display.

There are two notches on the lower right side of the cutting board – the knife sharpeners. In addition, under the actual board hides a second, smaller board to push out. This is not only practical if you need additional cutting surface need: In the second board is a so-called UVC light, the knife free of germs. All you have to do is put the cutting tools in the slot on the right side of the kitchen gadget. According to the manufacturer, the Chopbox can be used for 30 days until the integrated rechargeable battery has to be recharged.

On Kickstarter , the Chopbox is a success, it was already funded before the campaign to more than ten thousand percent! Interested parties can secure the smart cutting board for the equivalent of 90 euros. Worldwide shipping is scheduled for December.