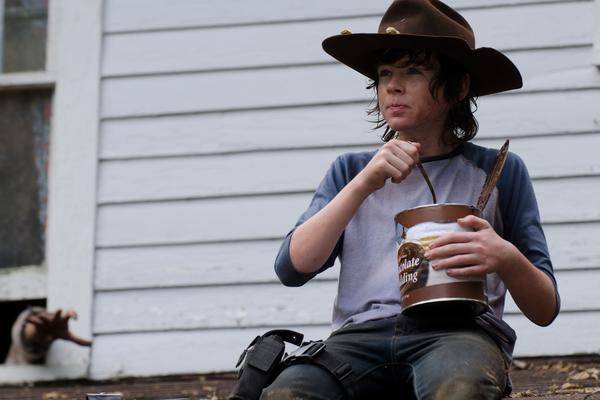 For several seasons, it was the purest running gag, not only among the fans of "The Walking Dead", but also on the set: Carl just will not stay in the house, even if you say it so many times! And usually that had consequences then … Now his former colleagues actor Chandler Riggs with a friendly side blow reminded once more of the inside joke.

The rough idea for the small attack was unintentionally provided by the former "The Walking Dead" star himself. On Twitter, Chandler Riggs enthusiastically announced that he had bought a house – the answer of the series makers was not long in coming …

It was only once …

On the company's own Twitter channel, those responsible answered the post of former Carl Grimes star with a dry "I still doubt you'll stay inside." A smiley with annoyed twisted eyes made the swipe complete.

Although Riggs tried to "maybe once in eight years!" to save from the affair , fans know, however, that this is not quite true. For us, for example, there are just a dozen occasions that Carl just did not stay in the house (or in the group). In season 4, even the complete Midseason premiere was basically about no other topic – whether the screenwriters wanted to show the fans so well that the gag had arrived with them …?

Season 10 of "The Walking Dead" kicks off on Sky on October 7th.