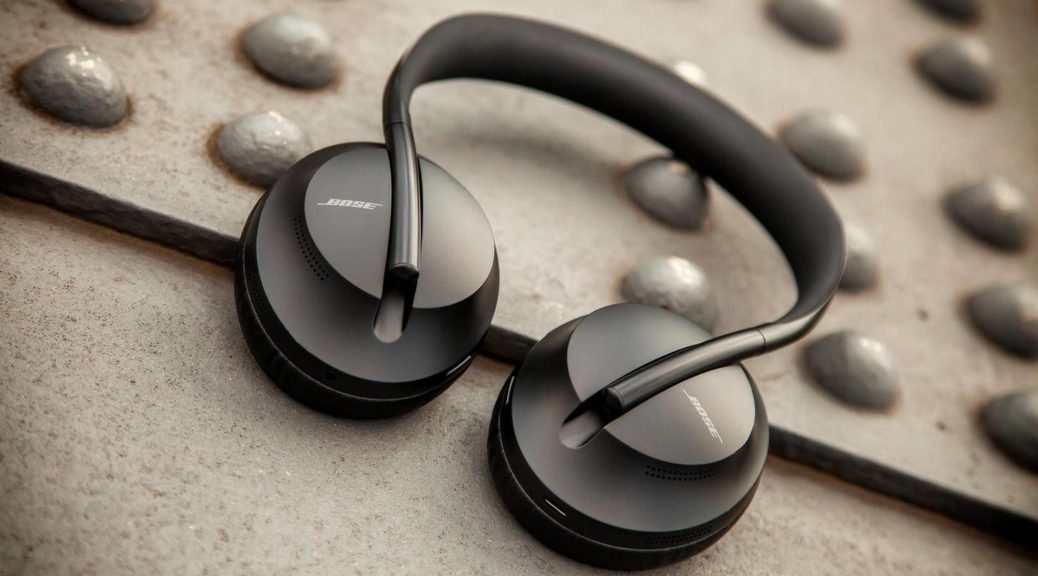 The Bose Noise Canceling Headphones 700 hide the ambient noise even during telephone calls. On top of that, there is a fresh design, a new sound tuning and ten ANC levels compared to the QuietComfort 35 II. In the test, we have checked whether the headphone is therefore worth 400 euros.

Design and workmanship: compact and robust

Compared to its predecessor, the Bose QuietComfort 35 II, the Bose Noise Canceling Headphones 700 was built more compact. The design is unusual, so the two earphones rotatably hang on steel bars, which go into the headband. The plastic handset can be moved up and down the rods to adjust for different head sizes.

The design is self-contained and modern.

The protective cover is compact.

The insides reveal which ear the listener is coming to.

Overall, the design looks much more modern than the QuietComfort 35 II. The headphones are sturdily built and should survive many journeys without hesitation. On the head he sits comfortably on longer train journeys or flights. Conveniently, the included case is compact and still offers a built-in compartment for USB C and jack cable.

Conclusion : The design is light and modern. The processing is robust, although the earphones are made only of plastic.

The Bose Headphones 700 are paired with the Bose Music app for Android and iOS. Unfortunately you have to create an account and the app requires access to the site. In the app, the intensity of active noise cancellation can be set, with ten levels to choose from. With the button on the left handset, users can also switch between levels 0, 5 and 10 without an app.

In the app, the noise-canceling can be adjusted in ten levels.

Noise-Canceling works best for the purpose of fading out persistent low notes, such as the train noises or airborne noises. Voices remain perceptible at level 10, but then they are hard to understand. Announcements in the train you can listen to by holding the button on the left handset, then the noise-canceling is temporarily set to "0". The effect: It sounds like you have no headphones on because the ambient noise is now captured with the microphones and played in the headphones.

In addition to traveling by train and plane, visits to the café or library, for example, if you want to read a book there undisturbed, are among the sensible purposes of noise suppression. On the other hand, it is not recommended to use it in traffic, as sources of danger should remain audible here.

Even walking through the city becomes riskier, the more intensively you set the noise canceling. The heavenly peace in a usually noisy city like Hamburg can be seducing for the users of the headphones, but with unforeseeable consequences. Here the own risk and responsibility is in demand. This was also emphasized by the manufacturer Bose, who sees travel as the main purpose of the headphone.

What the heavenly peace could also cloud, are the loud wind noise when hiking. If a strong wind blows, the headphones can no longer be meaningfully used – in case of rain this is not recommended anyway, as they are not waterproof. We hope that Bose will pay more attention to aerodynamics when designing a successor.

Noise-canceling is a blessing when traveling by train.

The forced shutdown after ten minutes without movement may be very disturbing. The headphones detect with the help of motion sensors, namely, whether the user is currently – at least a little – moving. If he does not do that anymore, the headsets 700 switch off after ten minutes. This is convenient for those who forget to turn it off themselves if they want to discard it and stop using it, but what if you're sleeping on the plane? Sleep can be interrupted suddenly by switching off the headphones. Or what if you wait for a call that Bose puts on the table and then accept it with the headphones?

Conclusion : The noise-canceling works very well, especially for persistent, deeper sounds such as driving noise or for the city or office noise. However, voices remain perceptible. The fact that the headset switches off automatically after ten minutes, if you do not move anymore, is very impractical in certain situations.

The microphones also record the environmental noise for telephone calls, which is then filtered out.

An innovation of the Bose Headphones 700 is the noise-canceling of ambient noise during telephone calls. In other words, if you call someone, the background noise on your page is filtered out and the person called hears (almost) only your voice. That went very well in the test, according to the called even "perfect". I called someone on a bridge over a busy street and another person in the city crowd for the test, in both cases, the communication succeeded flawlessly. Hopefully the technology will find its way into more noise-canceling headphones.

Conclusion : Noise canceling for telephone calls is a practical and successful innovation.

The headphones can be controlled via the smartphone, but also via buttons and a touch panel on the right handset. As mentioned above, the button on the left handset switches between noise canceling levels 0, 5 and 10. The upper button on the right handset is used to power on and pair with the smartphone. Finally, the button below is for activating a language assistant like Alexa or Google Assistant.

Among other things, three buttons on the outside are used for the control.

Double-tapping the touchpad starts or stops a song, swiping forward moves to the next song, swiping back to the previous song. Meanwhile, you can increase the volume by swiping up and down by swiping down. This works flawlessly in practice. According to Bose, the touch operation works even at very low temperatures. This is worth mentioning, because the direct competitor Sony WH-1000XM3 is said to have problems for some users and testers like The Verge . We did not have this headphone on our own.

Conclusion : The operation with buttons and touchpad works intuitively and reliably.

As accustomed by Bose, the sound is center-weighted – but this time more neutral, clearer and more detailed compared to the QuietComfort 35 II. The emphasis on the mid-range means that some might miss both low bass and higher altitudes. Since the vocals – and a large part of modern pop music – but anyway in the tonal middle, that will probably not bother the most. In classical music, on the other hand, the frequency spectrum is larger, and metal also benefits from higher altitudes and lower depths than the Bose brings.

The Bose Headphones 700 sound good, but not outstanding.

Unfortunately, the Bose Headphones 700 support neither aptX nor aptX HD nor LDAC. These Bluetooth codecs would have provided a better quality sound transmission. The headphones can also be connected to the smartphone with a cable. The sound quality is being polished up, but basically the Bose Headphones 700 does not rise in hi-fi spheres. The focus of this headphone is noise-canceling, not a particularly high sound quality.

Conclusion : The sound quality has improved a bit compared to the predecessor QuietComfort 35 II, but if you are looking for hi-fi sound, you have to look elsewhere. If you like pop and rock (but not metal or classical, where higher and lower pitches are more important), you will generally be satisfied.

Conclusion: If the price were not

The Bose Headphones 700 are among the best noise-canceling headphones. They are well-made, comfortable, offer a good noise reduction and can be controlled intuitively. The noise-canceling of ambient noise during telephone calls is also convincing. The automatic shutdown can be annoying after ten minutes without movement. This is useful in many situations, but in some typical applications not at all – such as when sleeping in train or plane or waiting for a call.

Above all, the relatively high price makes the Bose to create.

The biggest problem, however, lies elsewhere: they cost 400 euros. For the direct competitor Sony WH-1000XM3 only 300 euros are due. Unfortunately, we did not have it in the test, but in terms of features, the headphones take little, see below. In this respect, the Bose 700 headphones are recommended for those who are particularly important to the specific features (noise-canceling during telephone calls, ten levels for noise suppression). Others are more likely to use Sony, the QuietComfort 35 (II) or are waiting for a price cut.

The Sony WH-1000XM3 push themselves in comparison to the Bose Headphones 700 downright on. It is finally the top model from Sony for 100 euros less. In contrast to the Bose here is the support of aptX HD and LDAC given, in addition, the Sony offers adaptive noise-canceling, which automatically adapts to the environment. The NC can be personalized and there is an air pressure optimization for use in aircraft. The Sony finally fades out voices, which the Bose is not so good at.

Meanwhile, the Beyerdynamic Lagoon ANC, which is available in the different color versions "ANC Explorer" and "ANC Traveler", also costs 400 euros. The headphones support unlike the Bose aptX. Special features include Mosayc, a sound personalization technology, and a glowing interior that provides battery level and Bluetooth connectivity. There are only two noise-canceling levels, but Beyerdynamic advertises with a particularly good sound quality.