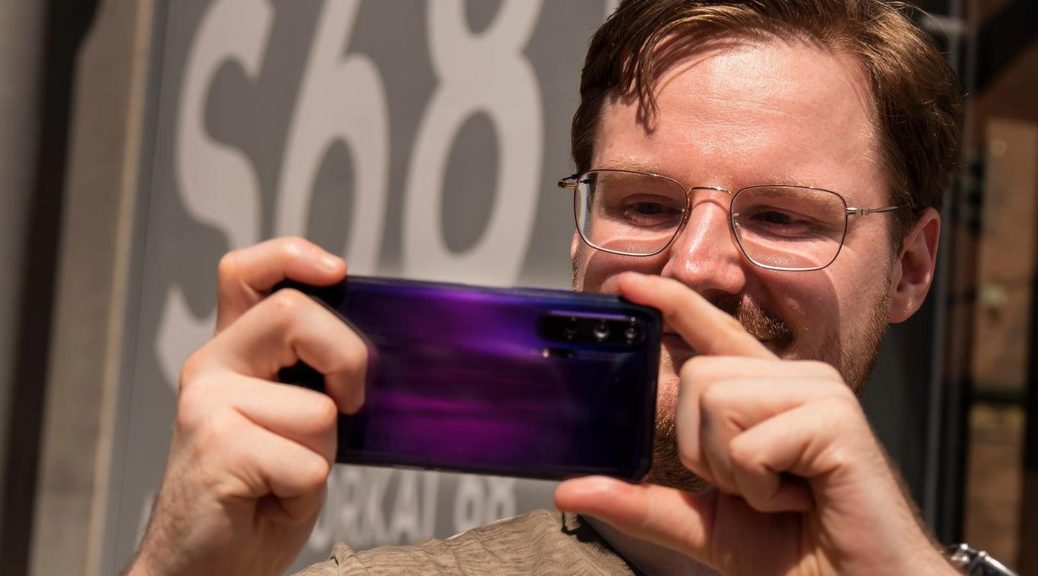 Honor proves with the Honor 20 Pro that their smartphones are in no way inferior to the devices of the parent company Huawei in terms of photo quality. What else the smartphone has to offer, we tell you in our test.

Design: shiny at the back, modern at the front

The incident light provides beautiful color effects on the back of the device.

Honor sets the design of the Honor 20 Pro on the now very popular glazed back. Unlike many other manufacturers, there is no monotone color tone under the glass, but a shimmering purple surface. Annoying, as with any glazed back, the visible fingerprints. In addition, the device is relatively slippery. In the upper left corner is the quad camera of the Honor 20 Pro – distributed over two separate modules. The larger module protrudes a bit too far out of the case for my taste.

The frame is made of aluminum and therefore stable. On the right side of the frame are the volume control and the physical fingerprint scanner, which also takes over the function of the power button. This is exactly at the right height to unlock the smartphone comfortably with your thumb. On the bottom of a now familiar picture: speaker, microphone and USB-C port. The jack for headphones is looking in vain, but there is an adapter included. On the left side there is finally the slot for two SIM cards and on the top of the frame even an IR blaster is installed. So you can operate about the TV.

On a jack connection you have to do without, but at least one adapter is included.

The front of the smartphone appears in a modern design. Except for a slightly wider chin, the edges are kept very narrow. The punch hole selfie cam is embedded in the upper left corner of the display, where it hardly bothers. In the frame is also still the very small earpiece, in which a notification LED is integrated.

Conclusion : The Honor 20 Pro shimmers pretty in the sunlight and is also a muse from the front. Except for the slightly too prominent camera module, I have little to expose the design.

Although the Honor 20 Pro belongs to Honors flagship series, the smartphone does not use an OLED but an IPS display. That surprised me a bit, as I had actually expected in this price range with an OLED display.

Would it only be an OLED display …

The 6.26-inch screen has a resolution of 1080 x 2340 pixels and thus a pixel density of 412 pixels per inch – nice and sharp. For color display, you can choose between "Normal" and "Vivid" modes. If you like natural colors, you should be happy about the high color accuracy of the Normal mode. Personally, I like it a bit fuller and prefer "lively". In the standard color temperature, the display was a bit too bluish, after changing to "Warm" I liked the picture well.

The brightness in the display is fully in order and the screen can be read well outside even with incident light. With contrast and black levels, it has no chance against an OLED display, but it is still good for an IPS display.

For an IPS display, the screen is not that bad.

Conclusion : The IPS display is good, no question. But with an OLED display, it just can not keep up. The OLED variant would probably have pushed up the selling price a bit, but that would have been worth it.

In the technical equipment Honor has spared no expense and effort and so comes in the Honor 20 Pro, among other things, the Kirin 980 processor used, which is also installed in the Huawei P30 Pro. The 8-core CPU is supported by a massive 8 GB of RAM. The size of the internal memory is 256 GB. Since it hardly bothers that the memory can not be expanded by microSD card.

With the current, brisk hardware, the Honor 20 Pro can score with me.

What sounds good on paper also convinces in practice. Apps open at lightning speed and thanks to the generous main memory, several memory-hungry applications can be run in the background at the same time. Also the change between the apps works perfectly – fast and without jerking.

Gamblers also get their money's worth with their smartphones. Neither "PUBG" nor my latest time-waster "Dota Underlords" could make the Honor 20 Pro work up a sweat. Both games ran smoothly on highest settings completely fluid. However, the punch-hole camera disturbed me a bit here. Fortunately, the camera can be hidden in a black bar. This can even be set individually for each app individually.

The 4,000 mAh battery ensures enough battery life. With normal use of the smartphone I had at the end of the day still 25% left. Most of my energy was in gambling, but if you rarely play, occasionally watch a YouTube video, write a few messages and surf a little on the Internet, you can probably get 1.5 to 2 days of running time. Once the battery is empty, it can be recharged in no time thanks to the 22.5-Watt Super Charge. To bring the battery from 0 to 50 percent, just 30 minutes are needed.

The fingerprint sensor is at exactly the right height.

I also liked the physical fingerprint sensor. Although I'm satisfied with in-display scanners, the physical scanner was another real improvement in reliability and speed.

Conclusion : There is nothing to complain about with the installed components. The processor is fast, RAM and internal memory are more than adequate and the battery life is convincing.

Camera: Good photo quality is in the family

Honor himself described the Honor 20 Pro at its launch in May as "Capture Wonder" and installed five cameras in its smartphone. That a large amount of cameras does not automatically lead to beautiful photos, we have already seen enough. The camera setup by Honor knows how to convince.

This is where the magic happens!

The 48 MP main sensor is a Sony IMX586. This shoots by default images that are evaporated by pixel binning to a 12 MP resolution. This ensures sharper images and less noise. Although there are also pictures with 48 megapixels possible, but in my opinion offer no added value – not even in the "48 MP AI Ultra Clarity" mode, which should provide even more details thanks to longer illumination and AI. The 12-MP recordings remain the best: super-sharp, hardly any noise and even in low light conditions still to use. In addition, the pictures have a good contrast and realistic colors.

The 16 MP ultra-wide-angle camera can not keep up with the very good quality of the main sensor, but fulfills its purpose: with a viewing angle of 117 degrees, even large objects can be easily recorded. Since the camera has no autofocus, but it is not suitable for any distance.

Excuse me, what time is it?

With the macro camera even the smallest details are displayed.

Thanks to the ultra-wide-angle lens, close-up names of the broad Elbphilharmonie succeed.

The night mode can also convince. At the time of the recording, it was already much darker, as can be seen here.

The pictures taken with the selfie camera also get nice and sharp from the right distance.

I really liked the pictures taken with the 8 MP telephoto lens. Up to a three times magnification, the zoom is lossless, a five-fold magnification is done with hybrid zoom and with digital zoom are up to 30-fold magnifications in it. In photos with three and five times zoom, many image details are preserved. The digital zoom, however, should only be used if you really can not get closer to the object.

And finally, the Honor 20 Pro also offers a 2-MP macro lens, with which even the smallest objects can be photographed in detail. This sensor is likely to be unusable for most users in everyday life, is for nature lovers who like to photograph flowers or insects, but a nice touch.

The 32 MP selfie camera shoots despite the lack of autofocus handsome, sharp images. The optimal distance for the best shots is about half an arm's length.

Video recordings are possible in 4K with 30 FPS, in FHD also with 60 FPS. The electronic image stabilization is always automatically activated and works reliably. Under normal recording conditions, no video is blurred.

Conclusion : If Huawei or Honor of some idea, then there are high-quality cameras. Especially with the main sensor and the telephoto lens can shoot great photos. And the shots of the selfie cam are also impressive.

Software: Everything necessary is offered

The Honor 20 Pro comes standard with Android 9.0 Pie with Honors custom Magic 2.1 UI. Huawei also lists the Honor 20 Pro on the smartphones that will receive the update to Android Q. Future-proof the device is definitely.

Visually, I find the Magic 2.1 UI appealing. The symbols are colorful and uniform. The lock screen every time I expect a new chic photo, I already know that from my Xiaomi Mi 8 and I feel right at home. I also know the missing app drawer from my private smartphone – in China you seem to get along well without it. You can, of course, install an App Drawer of your choice from the Play Store. Something surprised me, however, the lack of dark fashion.

Magic 2.1 is pretty and clear, but unfortunately lacks a dark mode.

Well, I liked the different power saving modes. In addition to the power mode, there are also power savings and ultra-power savings available. The latter crops the smartphone for most of its features, but could be very useful if you have no power source for a long time.

Conclusion : The based on Android 9 Magic 2.1 UI is clear, stylish and has everything you need. There is nothing to complain about except for a missing dark fashion.

Conclusion: The OLED screen would have done it perfectly

With the Honor 20 Pro, the Huawei subsidiary delivers a smartphone that leaves little to be desired. It looks fancy, comes with strong hardware, offers a durable battery and shoots awesome pictures. And the whole thing for a non-binding retail price of 599 euros. Unfortunately, the smartphone lacks the OLED display, which you can expect nowadays in a flagship. If it had, it would be one of the smartphones with the best features you get for such a price. If you can make friends with an IPS display, you will also get a very good smartphone with the Honor 20 Pro.

Alternatives to the Honor 20 Pro

If you want a noticeably better photo quality, you'll inevitably have to resort to the Galaxy S10 Plus or the Huawei P30 Pro . But then you have to dig a little deeper into the bag. Similarly high-quality cameras in the same price range but also offers the OnePlus 7 .

Honor offers a low-cost alternative with the standard version of the device itself. The Honor 20 has only 6 GB of RAM and 128 GB of internal memory. In addition, the battery has a lower capacity of 3,750 mAh and instead of a telephoto lens, only a 2 MP depth sensor is installed. Even with the other camera equipment, there are drawbacks . But it costs 100 euros less and is otherwise completely identical.