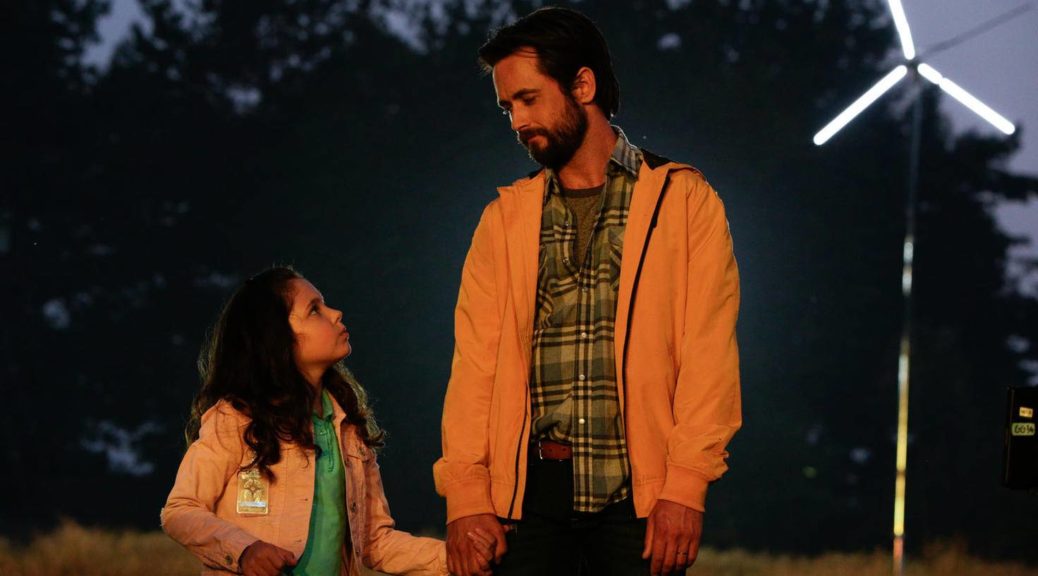 It's been ten years since we last saw Katee Sackhoff in "Battlestar Galactica". With "Another Life", the actress returns to the vastness of space. Whether that is good news for fans of her character Kara "Starbuck" Thrace? That's what I was wondering, so I watched Season 1 of Another Life directly on Netflix.

First, I must confess that I loved "Battlestar Galactica" (2004 – 2009) at the time! Especially the character Kara "Starbuck" Thrace, who became for me (as for many other fans) something of the epitome of the cool action heroine. To equate with Sarah Connor from "Terminator" – just in the universe. When I heard about the new sci-fi series by actress Katee Sackhoff, it was clear to me: I have to see her!

When the aliens stop by: That's what "Another Life" is all about

Since the 25th of July the first season of "Another Life" is available on Netflix. Thankfully, directly with all ten episodes, a sci-fi marathon was therefore nothing in the way. And the premise of the storyline sounded promising at first: "When an alien artifact lands on Earth, Niko Breckinridge (Sackhoff) leads an interstellar mission to find its source and make contact," Netflix said.

To put it in more detail, viewers in the pilot episode of "Another Life" first get involved with a huge alien spaceship, which lands on US ground just in front of the lens of influencer Harper Glass (Selma Blair). The crystal structure that builds on the following puzzles the military and government: Are the aliens peaceful? And what are those signals that the antenna-like structure seems to be diligently spewing into space?

Scientist Eric Wallace (Justin Chatwin) is part of the team that is trying to find out. Unfortunately, researchers are making only modest progress. How convenient that Wallace's wife Niko Breckinridge (Katee Sackhoff) is an experienced astronaut who is supposed to speed things up with the help of an interstellar mission.

… his wife Niko takes care of the whole thing in space.

When I saw Katee Sackhoff's new character Niko Breckinridge in the pilot episode, the anticipation was still undimmed. Everything pointed out that Niko could be a similarly angular figure as once "Starbuck". Although without the excess of drinks and tobacco …

But with the introduction of their crew, doubts began to sprout up in me: this mid-twentieth occupation, which looks like it had sprung from the Big Brothers house, is said to be the best that Earth has to offer in the future against a potential extraterrestrial threat ?

In fact, in the first four episodes of "Another Life," almost all cast members – apart from Sackhoff – shine primarily through half-hearted dialogues and elusive actions. Especially the character Michelle Vargas played by Jessica Camacho really got on my nerves very fast. But on the one hand Katee Sackhoff does her usual routinely everything, so that the plot of her new series does not crash into wormhole-like shoals. On the other hand, from episode 5, in fact, much better.

I just did not get warm with Michelle …

Bernie can afford one of the classic faux pas of the sci-fi genre.

Cas actress Elizabeth Faith Ludlow may seem familiar to some viewers from "The Walking Dead".

Uniforms? Not available any more!

Now, no one should expect a breakup into unfathomable space with a view to the plot of Season 1 of the Netflix series. The story is a smorgasbord of well-known sci-fi scenarios. If you know the genre a bit, you quickly feel scenes of "Alien", "Arrival" , "The Expanse", "Star Trek" and various other genre greats remind.

That does not have to be bad in itself, and in fact, "Another Life" works off almost every cliché. Unfortunately, the ideas of the scriptwriters do not always succeed in igniting. From Episode 5, but here is a lot better.

Various possible concerns of the audience seem to have already foreseen the makers and therefore integrated into the plot. So at the beginning of Season 1, I wondered why the crew of such an important space mission was not running in reasonable uniforms – or at least something comparable – through the corridors of spaceship Salvare, but in some rather questionable everyday clothes? I quickly got the answer from the character Michelle, who was admittedly not sympathetic to me by her snotty comment: "There have not been any uniforms for ten years – how old are you ?!"

If there are no more uniforms, we beat ourselves in dashing sports underwear through space – no problem!

No comparison with "Battlestar Galactica", but …

But good, as I said: From episode 5, "Another Life" is getting better and better at keeping the course through the vagaries of interstellar space. Nevertheless, Katee Sackhoff's new series can not match the level of "Battlestar Galactica". Fans of the series and spectators, who feel at home in the sci-fi genre, must therefore expect one or the other disillusionment. For everyone else, the new Netflix series features latest 5 episodes of relatively amusing entertainment that can be spent on a weekend.

Overall, genre fans should not expect any miracles from Another Life. The storyline is predictable and includes obvious borrowing from sci-fi classics like "Star Trek", "Alien" and Co. Salvare's crew has to warm up as well, but fortunately, actress and "Battlestar Galactica" – Icon Katee Sackhoff convinced from the beginning, which makes up for much.

From episode 5, the good moments of season 1 continue to increase, so that the new Netflix series is quite a nice conversation for anyone who can not be put off by the weaknesses of the first episodes – and cliché beats.