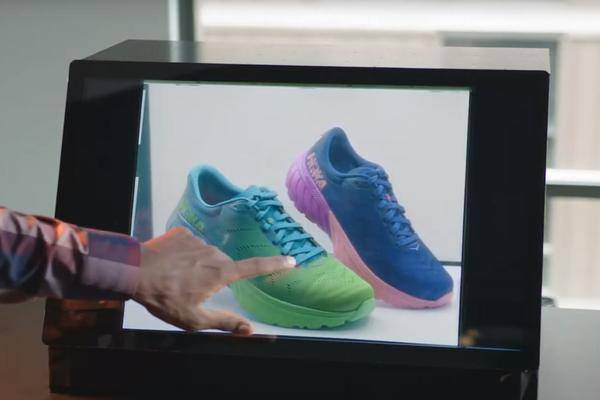 Adobe has introduced a new working tool for designers that combines image editing with real physical objects. For the so-called "Project Glasswing" not even a smartphone or VR glasses is needed.

The device, which can best be described as a "mixed-reality showcase", was presented by Adobe in a blog entry and a teaser video. With Project Glasswing, real objects, such as shoes or smartwatches, can be placed behind a display to further process the captured images on the display with programs such as Photoshop, Illustrator, or After Effects.

Transparency of the display can be adjusted pixel-precise

Unfortunately, Adobe does not explain the exact technique behind Project Glasswing. Only so much seems clear: A transparent touch display is used, which can display content such as a user interface, but at the same time is so transparent that the user can still recognize the object well. According to the company, the brightness and transparency of each screen pixel should be able to be customized. The device can therefore be used both as a normal monitor and as a transparent "window".

According to Adobe, Glasswing could be used in shop windows or museums, for example, to superimpose objects with additional information or graphics.

At the graphics conference Siggraph, which is currently taking place in Los Angeles, Adobe wants to reveal more about the interesting mixed reality project and also demonstrate a demo device.