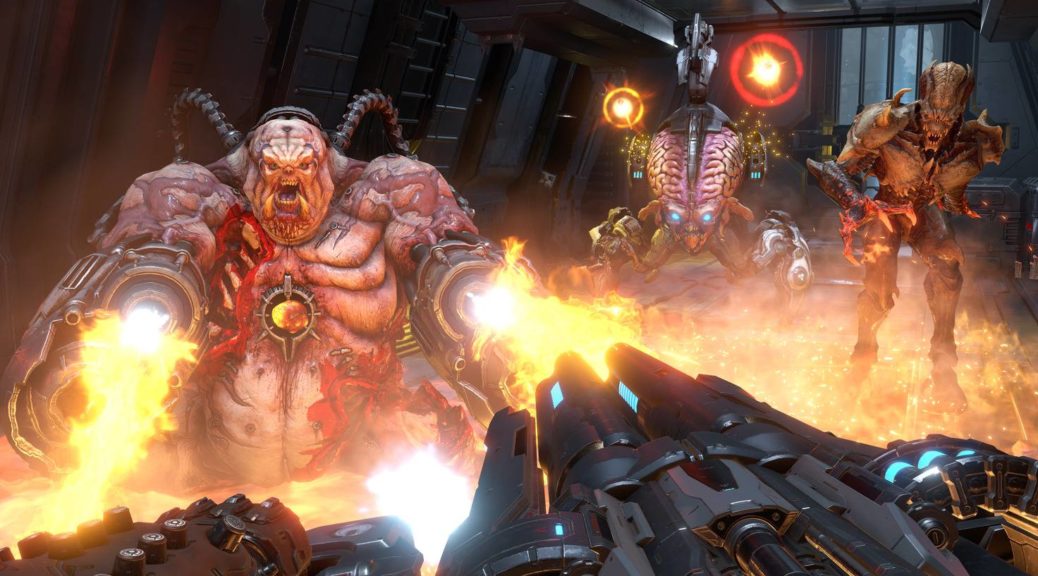 Computer games are always completely ignored as cultural assets. A mistake, because in games like “Red Dead Redemption 2” and “Grand Theft Auto” there are just as classic stories as in the texts by Friedrich Schiller.

In the face of this slaughter, even “Doom” and “Quake” look like funny walks through summer flower meadows: People are burned alive, limbs, tongues and arms are cut off, the bones of the dead are ground to dust. A father stabs his daughter, a woman is raped. Toads are baked into a cake and served.

In short: If the Shakespeare drama “Titus Andronicus” were a computer game, it would be indicated with absolute certainty. And that, according to all the rules of the protection of minors and good taste, also quite rightly.

Shakespeare would be “Doom Eternal” probably too lax.

Because against “Titus Andronicus” “Red Dead Redemption 2” is a nice country trip and “Tomb Raider” is just like visiting an ethnological museum. Above all, however, this bloodiest of the Shakespearean dramas, which are not particularly squeamish, raises the question of why one carnage should be great art and great drama – the other, however, entertainment rubbish for young people and late-puberant men and women. It can’t be the cruelty or the cynicism. And, if you take a closer look, not even at the stories that are hidden behind a lot of computer generated imagery and gripping sound effects, but are nevertheless exciting.

Is not from Shakespeare, yet “Tomb Raider” has much of what is considered “culturally valuable”.

It was already ten years ago that Andreas Rosenfelder, today head of the feature section of the daily newspaper “Die Welt”, explained around his 2008 book “Digitale Paradiese” that games were of course “part of Western cultural history”. And, as he further explained, “the medium that makes use of our culture throughout the entire fundus and that integrates all materials from the battles of antiquity to medieval mythological worlds to modernity with their everyday problems and reissues them in the form of games”

Other said: “Battlefield V” and the Greek war epic “Iliad” are related in spirit, “Monkey Island” and the search of the Argonauts for the Golden Fleece as well as the “Odyssey” and “Assassin’s Creed” have much in common – only that one learns more about world history and the Knights Templar in the episodes of “Assassin’s Creed”.

“Assassin’s Creed Odyssey” is not by any chance called …

But why is it then that computer games also
47 years after “Pong”, 35 years after “Tetris” and 23 years after “Duke Nukem 3D” play no role in the public debate
? And how is it that the idea of a games supplement in a major German weekly newspaper with artistically reviewed game news and exalted recommendations is unthinkable without having to smile at the same time?

Good question. There is no doubt at all that computer games are by far the largest and therefore the most important cultural asset for millions of people. In Germany alone, according to the trade journal “GamesWirtschaft”, the industry has generated sales of 3.3 billion euros – twice as much as its music colleagues and three times as much as the country’s cinemas. And yet the recognition is missing.

“The Robbers” in the Wild West? That’s how you could see Red Dead Redemption 2. Unfortunately we don’t (yet).

Of course, popularity alone is not a quality feature, and not every first-person shooter has to be discussed like the “catcher in the rye”. But any perceptible discussion beyond nerdiger Games pages would be an important and interesting progress. Just in school. Precisely because this is the culture that actually arrives behind the school desks.

Great storytellers of our time

It’s always like this: Every new form of culture is first welcomed by the young and open-minded. It is the nature of the ancients and conservatives to view change with skepticism, if not to reject it. So maybe it’s all just a matter of time. Comics, for example, were still considered trash, stupid and clumsy in the 1960s. Today there is a loving museum in the hometown of “Donald Duck” translator Erika Fuchs. There are dozens of culturally inspired statements about the references at “Asterix” and the meta-level of the “Simpsons”.

While the comic heroes of the 1960s and 1970s have long since arrived in museums, schools and newspapers, while Disney, Carl Barks and Matt Groening are regarded as the great storytellers of our time, nobody knows the inventors of “Super Mario”, “Lara Croft” or “Minecraft”. Shigeru Miyamoto, Toby Gard and Markus Persson are still no names where fans of the games reveal themselves. Simply because even their names are unknown to them.

All know “Super Mario” – but Nintendo’s plumber is still not on the curriculum.

Klar, games are on the one hand team products – and the genius cult of the feuilleton still hangs on the single, lonely ghost, who has the brilliant idea in the quiet chamber. On the other hand, it is also clear that games are not only pop culture, but also capitalism in its purest form: Those who invest so much money in development do not want to be highly praised, but misunderstood and bum around on the shelves. In other words: The successful games are like Hollywood blockbusters, not like arthouse cinema. Like “Star Wars” and “Marvel” film adaptations, they are viewed by educational authorities and cultural institutions as somewhat sniffy.

Where is games cultural studies?

But at least they are negotiated socially. What computer games lack is not only the reliable interest of the feature pages, but also a cultural science that actively and heartily deals with them. Just as film studies deals with moving images from Arthouse to Hollywood and literary studies with texts of all kinds. It takes a games science that wants more than programmers and business people to explain how to throw even more successful games onto the market. A science that closes the largest existing gap in the culture of our time.

Almost absurd that this is not already standard. Computer games simply don’t take place this way. And that is not only wrong, arrogant and a pity – but also a problem. Just because it would be good to communicate about what is happening on the screens culturally, socially and politically.

Games must become topic in school

When a rape simulation was published on the globally important games platform Steam in the spring of 2019, the indignation was justifiably great: A game in which women were penetrated at gunpoint – that was too much even for the otherwise rather cynical games scene. However, the indignation only spread very slowly from the games forums into the industry media and only days later into the country’s newspapers, where it was summarized by mostly not overly experienced journalists. The experts who classified this were not experts.

Really just senseless violence? Or is there more in “GTA 5”?

It would be optimal if the newspapers were to hire cultural editors with a focus on games with immediate effect, if institutes for games science were to be established at universities and games became a topic in schools – and not only if high scores were compared again in the last row under the bank. This may take a while.

So maybe it’s the students themselves. Maybe they’ll just have to build the bridge they want to cross themselves and suggest what’s overdue: A paper on a comparative analysis of “Grand Theft Auto” and Schiller’s “The Robbers” would at least be a start.

These and other stories can also be found in the current issue of  Magazine July/August, which is available free of charge in all SATURN markets.