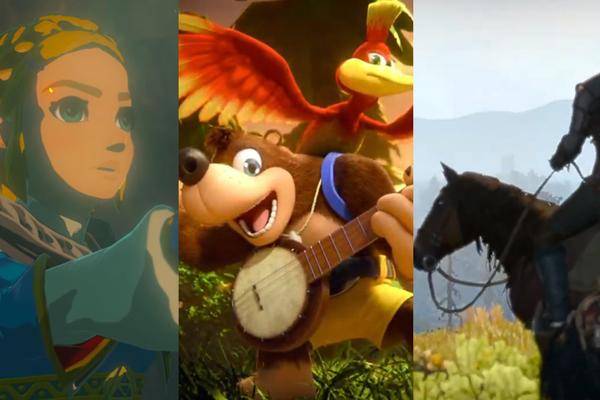 In the old tradition, Nintendo announced its new products at the E3 2019 again in a direct livestream. New trailers for upcoming games for the Nintendo Switch lined up in the video and there were a few sensations too! Here are the highlights at a glance.

Unluckily Luigi probably wants to just have his peace, but always gets the nastiest jobs – in "Luigis Mansion 3", for example, the cleaning service in a haunted hotel. A new video focuses on the helpful abilities of the Ghost Vacuum Cleaner with which the frightening plumber goes on a ghost hunt. Also good to know: "Luigis Mansion 3" comes with couch co-op and an online challenge mode, in which you clean up with up to three comrades. The release is due this year – but when exactly, we still do not know.

Rather briefly, Nintendo had already teased the remake of the "Zelda" classic "Link's Awakening" a few months ago. Now there's more gameplay, insights into a dungeon editor for your own adventures and a final release date in the fall.

The SNES classic "Secret of Mana" has already received a remake, next year is "Trials of Mana" turn. The third part of the "Mana" series was previously only available in Japan, the worldwide reissue in a modern look makes double sense. Those who prefer to gamble retro, get the whole trilogy already on the Switch: The "Collection of Mana" is now available.

Did you really believe the wild rumor that CD Projekt Red's gigantic "The Witcher 3" can run on the Nintendo Switch? Did you? Then congratulations! A port of the acclaimed RPG actually comes on the hybrid console. The "Complete Edition" also includes all DLCs – and the release is planned for this year.

No one expects any big news on "Fire Emblem Three Houses" – the E3 trailer falls short accordingly. Nothing changes at the release date at the end of July and otherwise it looks as if everything will run to the satisfaction of fans in the series.

There are already some "Resi" titles for the Switch, now there are two more: "Resident Evil 5" and "Resident Evil 6" join the horror portfolio within a few months.

Holy Geballer after old school – that's what "Contra" stands for. "Contra Rogue Corps" is about to follow in the footsteps of the run-and-gun classic. It looks a bit different than glorious SNES times, but the weapons are big again, the action in single or multiplayer wild again – and the release on the Nintendo Switch is in the fall.

The mech-shooter "Daemon x Machina" was already excerpts playable as an early demo. But when it should appear, the developers revealed only now: In the middle of September, we invite the combat robot.

"Panzer Dragoon" is a true classic, but the series of games from the House of Sega is currently on hold. Now Nintendo revived the hang glider simulator again: The 1995 released first game of the series comes this year completely renewed on the switch.

Of course, "Pokémon Sword & Shield" also appears on Nintendo Direct – after all, the Games are perhaps the largest switch release of the year. However, with the news value of the E3 trailer hapert's. Well, at the E3 2019 both are already playable as a demo. That brings us back home but not so much. After all, we still learn that the Pokéball accessory for the switch in some way with the games will be usable – but how exactly, reveals Nintendo not synonymous.

"Astral Chain" looks good – but little can be said. The new trailer to the action game of the "Bayonetta" makers makes a rapid optical trip out of gameplay and cut scenes and crowns the fireworks with a release date.

Paradox Interactive is known for tactical games with a historical core. "Empire of Sin" fits quite well into the picture: As a "character-driven strategy game in the Chicago of the 1920s", the developers refer to their new title, which comes across in the trailer to snappy swing ever extremely cool.

The rhythm role-playing game "Crypt of the Necrodancer" meets "The Legend of Zelda" – and out comes a musical journey to Hyrule! When we tie our bundle to the rhythm of the beat and draw the master sword, thanks to the E3 trailer, it's finally settled.

"Mario & Sonic at the Olympic Games"

Once rivals, now stuffed up like that: Mario and Sonic will meet again for an Olympic sports game and compete on the occasion of the Summer Games 2020 in Tokyo in various disciplines. The trailer includes football, skateboarding, climbing, fencing and surfing.

The patience of "Animal Crossing" fans Nintendo has strained in recent months properly. When will the popular simulation finally come to the switch? Was not the release targeted for 2019? That's getting tight … At the E3 2019's finally got an answer: The publication had to be postponed to next year, but now stands the specific date.

With a fast-cut video, Nintendo announces a few minor releases and ports that come on the Nintendo Switch. Perhaps the most important:

With this announcement, Nintendo was definitely having fun! Fans have long been looking for a performance by Banjo and Kazooie in "Super Smash Bros. Ultimate", but in the new trailer, the developers once all duped – with a silhouette of the "Duck Hunt" dog, but then the actual Newcomer is knocked down. Luck! In the autumn of 2019, the dynamic duo will be available in the tester.

The blast finally: "The Legend of Zelda: Breath of the Wild" gets a real, real, great successor! The trailer does not yet reveal the details, but the fact that the game is currently under development is enough for now. Let the hype begin!