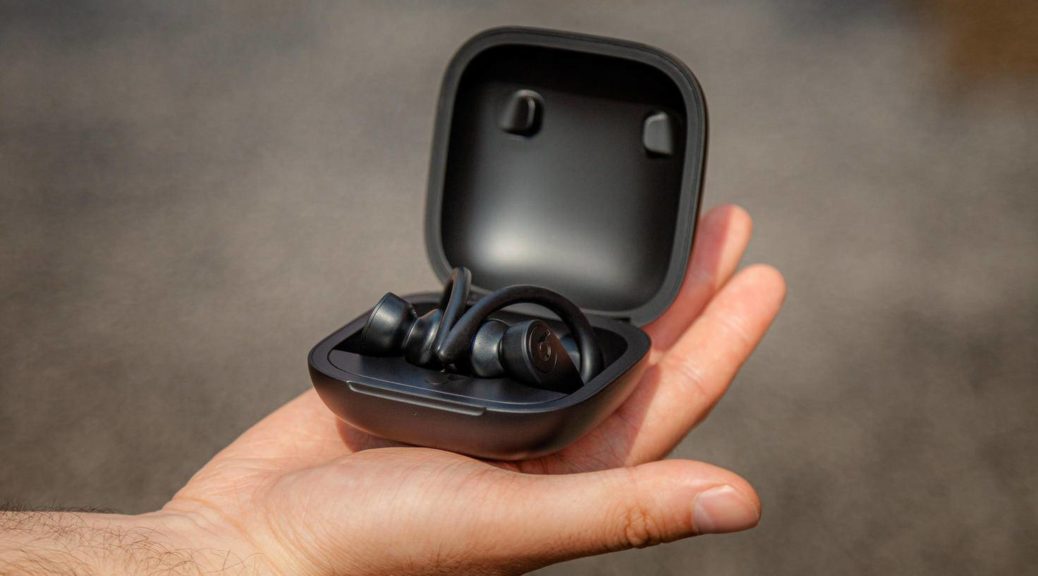 The Powerbeats Pro combine the typical Beats sound with the wireless features of the Apple AirPods. Whether the sports headphones can convince, you will learn in the test.

For a long time it was relatively quiet around beats. But after the manufacturer has taken care of the maintenance of his product catalog in recent years, comes now with the Powerbeats Pro a new product that actually has it in itself.

Sure, at first glance, the Powerbeats Pro are just a few more Bluetooth headphones. But even if Beats is on it and it clearly looks like beats, there is a lot of Apple technology inside. At least in this combination, there was not that yet.

Visually, the thing is relatively clear. The Powerbeats Pro are a completely wireless version of the already available Powerbeats Wireless. The only significant difference is the omission of the neck cable, which holds both earphones together. Instead, both earphones now work completely autonomously with the Pro version – similar to the Apple AirPods, the Samsung Galaxy Buds or the Bose Soundsport Free.

Conspicuous – and certainly also a matter of taste – are the rather large brackets that are clamped behind the ear. Above all, the "touchdown" of the two listeners is a bit fumbling. In return, the Powerbeats Pro are also bomb-proof and will not fall out of the ears even with violent movements. This is especially important because Beats markets the headphones specifically to athletes.

Once put on, the Powerbeats Pro also do not look as bad as it first seems. This is mainly because the straps actually disappear largely behind the ears. All you can see is the curved headset with the Beats logo.

Inside there is a lot of Apple …

Basically, the Powerbeats Pro are Bluetooth headphones. As a result, they can also be paired with all Bluetooth-enabled players. However, this is particularly elegant with iPhone, iPad and Co.

The reason is the H1 chip from Apple, which is already in the second-generation Apple AirPods. He makes sure that an iPhone or iPad recognizes the headphones very quickly. Above all, it facilitates the already not very complicated coupling of the headset with the Apple devices. This works almost automatically, without having to visit the Bluetooth settings in the playback device at all.

When worn, the Powerbeats Pro look more subtle than one would expect.

Once paired, the Powerbeats Pro will automatically connect to the player whenever the case is opened. With an iPhone XS Max, this worked out within two seconds in the test, but even with an Android smartphone, it took only a blink of an eye. A delay of the coupling is virtually imperceptible in normal everyday use.

The H1 chip also brings another advantage. He ensures that the Apple voice assistant Siri by voice command "Hey Siri" can be activated directly on the built-in microphones of power beats. This does not work with other language assistants unfortunately. Google Assistant and Co. can be used anyway, but must be activated by hand on the smartphone.

… and the typical beats sound

Even if the connection technology of the Powerbeats Pro is the same as that used in the AirPods, the sound signature is a completely different one. Sonically, Beats remains largely faithful, but continues to evolve.

Gone are the days when Beats headphones have just taped the entire sound with buzzing basses. Although the Powerbeats Pro sound pretty bass-heavy, they also give the music a lot more room to unfold. Overall, the low notes are very organic and far less intrusive than in the past. This creates a rather warm and soft sound. Especially the music genres HipHop and EDM benefit from this sound.

The sound is not suitable for every style of music to the same extent.

But it gets a bit more complicated if, like me, you mainly listen to rock, pop and metal. Depending on how the songs are instrumentalized, then the soft sound is then already dull and swallowed some of the dynamics of individual songs. For Hard Rock and Metal fans, the Powerbeats Pro are in my view quite inappropriate, because they simply lack the punch to really transport a crisp drumming game. And even sharp guitar riffs do not really manage to stand out from the subtle bass sound.

Sure, overall, the criticism may be at a fairly high level, but the price moves with a EIA of just under 250 euros at a high level. Depending on the taste of music, there are alternatives in this price range, such as the Bose Soundsport Free, which deliver a much more differentiated sound. For fans of hard rock music even the much cheaper Sennheiser CX might be the better choice.

Anyone who fears the comfort of the Powerbeats Pro in view of the dominant earhook can be reassured. At least for me, the headphones were always super comfortable. Nothing pushes or scratches. And indeed, the brackets also bring a real advantage. They provide for a, in my opinion, perfect grip. It does not seem to matter what kind of sport you run, presumably the Powerbeats Pro would not fall out even when parachuting or bungee jumping.

No matter what sport: The Powerbeats do not fall out.

Big case with a small blemish

Incidentally, the transport case of the Powerbeats Pro is a real knocker compared to AirPods and Co. The headphones are not really compact and pocket compatible. However, the oversized case also brings with it a decisive advantage: a peak battery life.

The earphones themselves can store enough power at a moderate volume for nine to ten hours of playback time. The case itself also takes another 14 to 15 hours. The end result is an outstanding battery life of up to 24 hours with one charge. In addition, the case is quickly recharged thanks to fast-charging technology. 5 minutes on the power supply enough for just under an hour of music playback.

The case does not really fit in your pocket.

The fact that Beats has been an Apple subsidiary for several years, you realize at the latest when connecting the charging cable. Instead of USB-C, the manufacturer relies on Lightning – handy for iPhone users, annoying for everyone else. Unfortunately, there is no way to charge wirelessly.

The Powerbeats Pro as a complete package almost effortlessly join the ranks of high-quality sports headphones. Above all, the pairing with the smartphone and the seamless connection, as soon as the earphones are taken out of the case, to convince. And the fact that all this works well despite the Apple H1 chip not only with the iPhone, but also with Android devices, suggests that Beats has understood the Bluetooth basics perfectly.

The sound has changed a lot compared to previous Beats headphones. Gone are the days when booming basses just go over all the subtleties in the soundscape. The bass sound is still massive, but leaves the middle and high notes enough air. This creates a fairly soft sound.

Still, the Powerbeats Pro are especially suitable for lovers of hip-hop and EDM, while other music styles are still a bit disadvantaged by the sound mix. For rock and metal, the last punch is missing and fans of classical music should generally wish for a more neutral sound. Given the hefty price of around 250 euros, potential buyers should therefore carefully consider whether the Powerbeats Pro fit their musical preferences.

Good alternatives for athletes are, for example, the Bose Freesport Free ( in-test ) or the Sennheiser CX. You can find a comparison test of some of the best wireless in-ear headphones here .