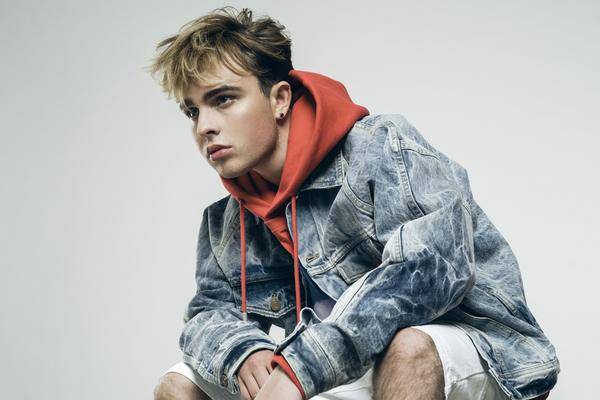 "My phone is Number One, it's always there!" The question of the most important technical device in his life Mike Singer can answer lightning fast. Consequently, we also catch the pop singer mobile for an interview: Shortly before a festival appearance, we talk to the 19-year-old about social media, virtual gigs and concerts with dead role models.

: Do you remember what the first social network you signed up with?

Mike Singer: That was SchülerVZ because my parents kind of allowed me to do that. Then I secretly logged in to Facebook. I always thought that my parents did not want that. And at some point I just get a friend request from my mom and dad. That did not interest them! They just wanted to see what I write and post and so on. They are very relaxed with it.

How many networks do you use today in parallel?

Mike Singer became a pop star via social media. 1.5 million fans follow him on Instagram, 748,000 subscribers watch his YouTube videos. That's worth it: Singers albums "Karma" and "Deja Vu" landed in 2017 and 2018 at # 1 on the German album charts. His current album "Trip" appeared this year and also made the leap to the top.

Do you have an exact plan, which information and contents you distribute over which channel?

Singer: Actually, I always post everything on Instagram and Snapchat. Because there are also people who are just watching Insta stories or Snapchat stories and are not on both networks.

You are known to have a lot of fan contact. Is it still possible as a musician today to do it differently or is this part of the job?

Singer: I think that's part of it. That just brings them close to the fans they are looking for. There are sure to be artists who do not do that, who do not use Snapchat or Instagram at all. But it's important to me that I have contact with my fans.

Will that be too much of a challenge? I saw on Facebook how people in comments alerted you to actions, for example, where someone with a disease wishes to meet with you. How do you deal with it? You can not do everything …

Singer: Yes, of course, you can not do everything. I try to do as much as I can. I think people already understand that I can not see or answer every message. That's why it's okay. People know that I get a lot of news so that's why they show understanding.

So you do not get angry messages á la "I've written you a thousand times, now answer"?

Singer: Yes, that sometimes happens – but then meant rather sweetly.

With your 19 years, you're a representative of the generation that does not even know a world without internet and social media. Do you sometimes notice in conversation with other musicians that you have a different approach – through your age and the age of your fans?

Singer: Well, I realize that I somehow understand the generation better. But for example, a few days ago I was together with [the rapper] Summer Cem and for that Instagram is just as important – although that's a completely different target group. But that's just the way to get in touch with the fans. I think it's the same with most artists today.

At the time of the European elections there was just a debate about the possibilities and the responsibility of long range. When private individuals publicly position themselves via social media and reach many people with it. How is your point of view? Do you see that as your task to position yourself with certain things?

Singer: It's definitely that I want to make this private for me. Since I do not want to somehow tell anyone my opinion or direct anyone in any direction. Everyone should do it the way he wants it and that's why it's not necessarily that I post it or something. I think everyone should say what they really want there.

It's not just the smartphone that gives us more and more opportunities to network. Techniques like virtual reality or augmented reality are becoming more applicable and creating virtual spaces to meet. Do you see any potential as a musician to use that? For the stage show, for example?

Singer: When we go on tour, we always do a set design – now we had some LED walls with us. Something that interests me a lot and it is also always exciting to hear what the people from the stage company suggest to us, because you can do so much there.

But I'm more interested in gaming: I used to play a lot of PlayStation and now my little brother is in it. With him it is always racing games. He's got a steering wheel now, so that feels like you're really in VR in the car. I think that's really incredible. I got sick right away, but my little brother plays all day!

Speaking of games: There has been some overlap with pop music lately. The American producer Marshmello, for example, recently performed in "Fortnite". Can you imagine something like that?

Singer: Definitely! Something would be awesome to perform in the virtual world. Especially with me, I play a lot myself. "Fortnite" not now, my little brother has tried to teach me, but I'm somehow not clear. I like to play Call of Duty – and FIFA plays the whole team. When we're on tour, we have matches every day.

At "Fortnite" I try to get in a little bit, but that's not so meanwhile. With "Call of Duty" you come directly back into the game, but with "Fortnite" it always takes time, until you have ever met someone again.

There is already a virtual image of you: in the wax museum Madame Tussauds in Berlin is your life-size hologram. Explain, how did that go?

Singer: Madame Tussauds asked us. For me that was really incredible: When I had my graduation trip, we went with the class to Berlin and were also in Madame Tussauds. Now we met there and recorded a hologram. It goes with cameras that shoot upright – like Insta-stories actually, only in violent quality. This is then beamed over with a projector to such an extra slide on glass. And that is now in Berlin. This is definitely a big lesson for me.

For a few years, even deceased musicians are revived as holograms and then go "on tour" …

Singer: Yeah, I saw that at Tupac! Megaheftig!

If you could choose to perform with a hologram, who would you take?

Singer: I think I would take Tupac. I am a huge Tupac fan! Or Michael Jackson. Or Elvis Presley.