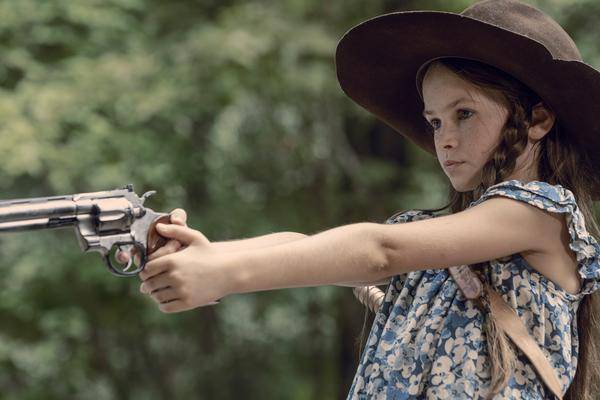 "The Walking Dead" gives the fans a bittersweet reunion with Season 10. For example, Rick Grimes still has not found his way back to his family in Alexandria. But a new photo now shows a clash between Judith and Abraham – at least behind the scenes.

Because Abraham can not go back to "The Walking Dead" due to his serial number of course, but actor Michael Cudlitz already. The actor is currently on the set of the series in Georgia, where Cudlitz is responsible for a second time as a director "TWD" episode. He staged episode 3 of season 10. Judith actress Cailey Fleming took advantage of the hour and shot a heartwarming selfie that she shared on Instagram with the addition "TWD family".

Fittingly, Michael Cudlitz wears a baseball cap on the snapshot that Crew and Cast of "The Walking Dead" Season 7 got. The number is wrapped in barbed wire, an allusion to Lucille, Negan's baseball bat. And who or what was responsible for Abraham's serial death? Yes exactly …

Does "The Walking Dead" move?

While the shooting for Season 10 is in full swing, "The Walking Dead" threatens a change of location. Various American media groups are currently threatening to turn their backs on the state of Georgia should the strict, controversial ban on abortion that was recently approved come into force. AMC also belongs to the same broadcasting groups, reports Forbes . Thus, "The Walking Dead" could get a new location in the future, although the series has been shot since 2010 in Georgia.