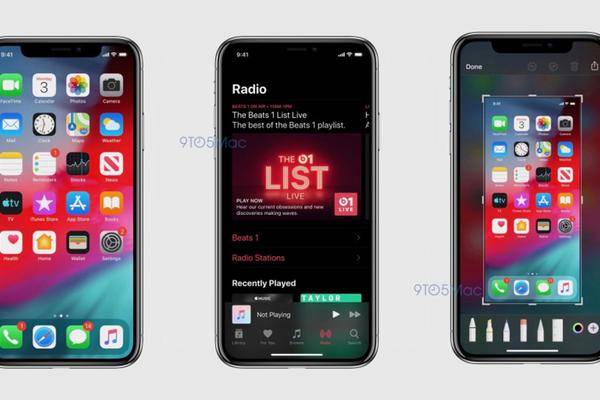 Next Monday, Apple will officially unveil the new iOS 13 at the developer conference WWDC 2019. A few days before the performance, the first screenshots of the new operating system have now appeared, showing, among other things, the Dark Mode.

The website 9to5Mac has received the photos according to their own information from a confidential source. Most interesting is the new Dark Mode, which wraps the mobile operating system in a darker garment at the touch of a button. The mode can be activated both in the iOS settings and via the control center.

Dark Mode: Only subtle changes on the homescreen

On the homescreen itself, the dark mode seems to change a bit at first – only the dock at the bottom of the screen gets a darker background. However, it is possible that Apple will be delivering new wallpapers with iOS 13, which emphasize the benefits of dark mode. In apps like Apple Music, however, the changes made by the dark mode become apparent very quickly. Instead of dazzling white, saturated black dominates – which should at least benefit the battery life of OLED displays.

Other changes in iOS 13 include redesigning the Reminders app, merging the Search My Friends and Find My iPhone apps, and a new look for screenshot editing.

The WWDC 2019 starts on June 3 with a keynote. Then Apple boss Tim Cook iOS 13 for the first time in more detail.