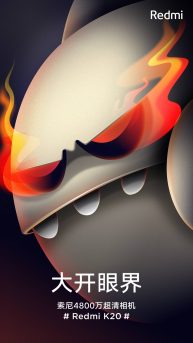 Both Redmi and his CEO Lu Weibing have taken a pace of showing each day a new feature of their expected flagship. And now, as confirmed by the company through Weibo, the mysterious Redmi K20 will include a 48-megapixel sensor as the main camera .

If you do not want to miss any news of the next Redmi K20 and K20 Pro , you can join our Telegram Group : @ RedmiK20byXiaomi

Specifically, through a new photograph as is usual for the company, Redmi confirms the presence of a SONY camera "Ultra Clear" 48 megapixels . A model that Lu Weibing later confirmed that it was the SONY IMX586 , which we found in the Xiaomi Mi 9 and the Redmi Note 7 Pro .

It should be noted that in the image attached to the company (just the one added below) add the text " Ultra Claro ", a feature that could lead to that camera has a great opening even better than the Xiaomi Mi 9 . 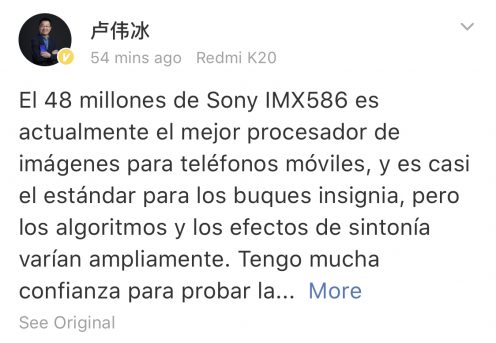 Better camera than the Xiaomi Mi 9

If we remember, the current flagship of Xiaomi, includes a sensor SONY IMX586 with aperture f / 1.8 , while a large number of rumors suggest that the camera of the Redmi K20 will have an aperture of f / 1.7 , a fact that could be confirmed we now specify the denomination "Ultra Claro ".

Note that a few weeks ago the CEO of Redmi confirmed that one of the photographic sensors of the Redmi K20 would be Wide Angle , confirming at the same time and in a way, the fact that this new flagship would have a combination of three sensors photographic

And, so far, the most normal thing is that the telephoto-type sensor is responsible for depth reading to achieve the effect bokeh type, and therefore necessary in addition to the newly confirmed sensor SONY IMX586 Ultra Clear 48MP and The Wide Angle type sensor.