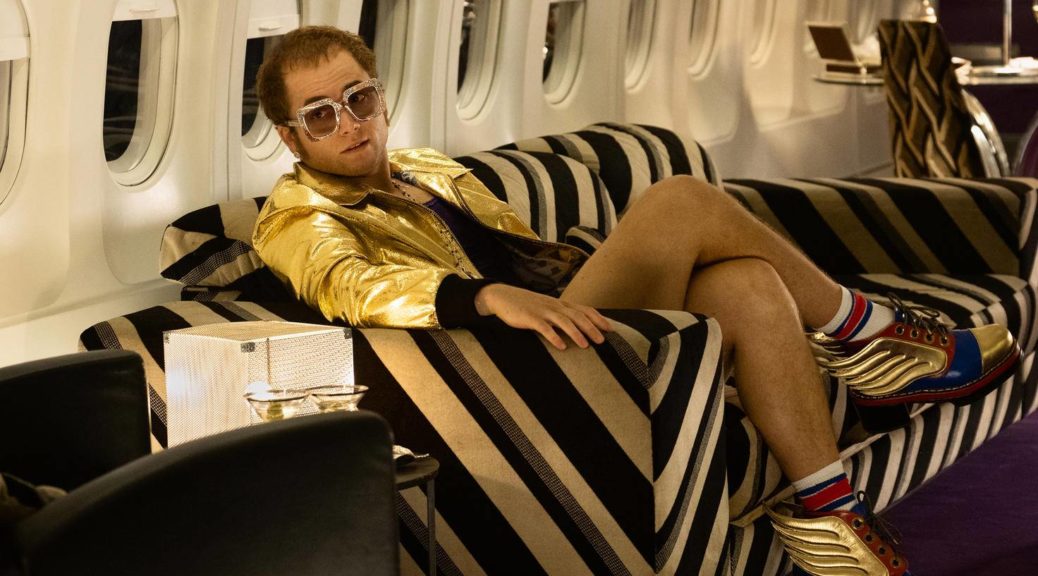 After "Bohemian Rhapsody", the next film about a music legend is in the starting blocks. This time it's about Sir Elton John – and his dazzling life calls for an equally dazzling movie. Whether "Rocketman" takes off or crashes, you read in our review.

"My name is Elton John, and I'm an alcoholic … and a cocaine addict," is one of the first sentences that lead actor Taron Egerton in "Rocketman" of himself. Then suddenly his young self shows up in the middle of the room, kidnaps Egertons Elton John together with the viewer in his childhood and sings "The Bitch is Back".

It quickly becomes clear: Reginald Dwight, the true name of the singer, has always been different, always something special. Later, he creates the dazzling fictional character Elton Hercules John to cover his shy nature. Shortly after, he meets the songwriter Bernie Taupin. Together they write countless number one hits like "Your Song". John has a steep career, but behind the glittering façade it looks different.

"It's not all gold that glitters", also applies to Elton John, because behind the glittering facade it looks different.

Alcohol, drug and sex addiction, loneliness, outbursts of anger and the desperate desire to be loved are central themes in "Rocketman". Elton John, who is also involved in the filming of his life as executive producer, sheds light on his personal low points. "The film had to be as honest as possible, I flew up high, but also fell very low – that's the way the film should be," the musician explains in a short documentary. In this way, "Rocketman" is sometimes really a "wild ride", as it expresses Elton's John's manager John Reid in the film – even for the audience.

For example, in the days of his escalating drug excesses, the plot repeatedly breaks off and suddenly jumps into another scene. For a moment, the protagonist is still in his bedroom, the next moment he is already sitting in a private plane and looking around in confusion. The viewer suffers from blackouts in these moments with the drug-addicted Elton John and, like him, needs a few seconds to catch himself again and to orientate himself in the story.

Where do all the people come from? Elton John's drug addiction brings him blackouts.

Fantasy musical instead of classic biopic

We owe this idiosyncratic staging alongside Elton John himself to director Dexter Fletcher, who recently completed the production of "Bohemian Rhapsody" after Bryan Singer was fired in the middle of the filming. Except for Fletcher and an epic soundtrack, however, the two films have little in common.

As announced several times in advance by Elton John and the producers, "Rocketman" is much more a fantasy musical than a conventional biopic. In plain English: Every few minutes, conversations merge seamlessly into singing and dancing. Entire groups of people suddenly dance in sync with each other or an orchestra appears from nowhere. It certainly does not appeal to every moviegoer, but it speaks to me much more than, for example, the countless music studio and stage sequences in "Bohemian Rhapsody".

The downside: Partially divert these spectacular shows from the emotional side of the film. No sooner are you touched by what is happening on the screen, as a spectator you are carried away by colorful costumes and loud music – where did we stop?

Another catch: even the biopic that does not want to be, does not come without some typical (and a bit cheesy) biopic elements. Such as the obligatory text fade in front of the credits, which summarizes what Elton John has achieved since the film events everything. If the movie ended with "I'm Still Standing" instead, I think it would have been fine. The song finally speaks – as with any good musical – for itself.

Taron Egerton outshines them all

The fact that the concept of musical biopics works out is mainly due to lead actor Taron Egerton. The "Kingsman" star shines as Elton John – and not only because of countless rhinestones on his fancy costumes. In the silent, emotional moments, captured by close-ups, the actor is as believable as in the moments when he turns the showman Elton out. And as if that alone was not enough, Egerton sings all songs himself, which gives the film in the truest sense of the word an additional authentic touch.

… and Richard Madden (pictured right) deliver a good performance in "Rocketman" in a double sense!

As a reminder, by mid-2017, Tom Hardy was still in the lead for the lead role – and as much as I like seeing the "Venom" star on the screen, I'm glad it turned out differently.

But not only Taron Egerton delivers a convincing performance in "Rocketman". Jamie Bell as John's songwriter Bernie Taupin and Richard Madden as John's longtime manager and short-term affair John Reid also convince. As in the Queen's biopic "Bohemian Rhapsody", Reid does not get away too well: Both films accuse the music manager of greed and recklessness.

In addition, there is another parallel: In both films Reid is played by a former "Game of Thrones" star. In "Rocketman" it is Robb-actor Richard Madden. In "Bohemian Rhapsody" it was Aidan Gillen, known to fans of the Fantasyserie as Kleinger.

Conclusion: And the Oscar goes to …

The life story that "Rocketman" tells may seem all too familiar: the unloved child, who rises to become a drug-addicted rock star to eventually find himself. However, it is the way that makes the self-proclaimed fantasy musical so charming. Unstet narrated, with abrupt jumps in time and fantasy elements like in a fever dream. These beloved hits, which continue the events on the canvas without ever seem out of place. And the icing on the cake is a Taron Egerton, who is fully absorbed in his role as Elton John. Certainly not a movie for everyone, but if it's up to me, the next Oscar for best actor after Rami Malek goes to Taron Egerton!