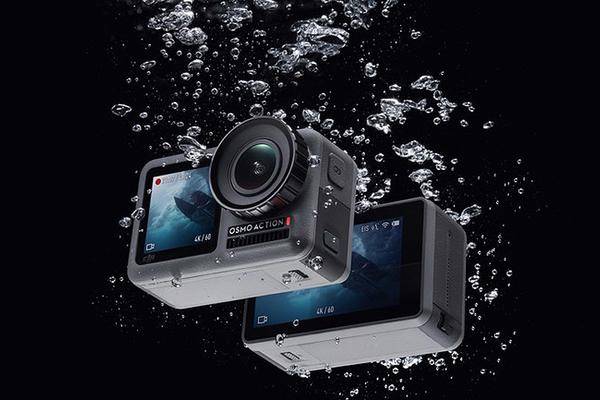 With the DJI Osmo Action, the drone experts from China are finally looking for competition with GoPro and Co. The newly introduced action cam should convince with some peculiarities.

GoPro gets new competition: After the drone manufacturer DJI had caused a sensation last year with the mini-camera Osmo Pocket , now follows with the DJI Osmo Action another prank. The action cam presented by press release can also be regarded purely visually as an attack on GoPro.

Equipped with a 1 / 2.3-inch sensor with 12 megapixels, the mini-camera films in a maximum resolution of 4K at 60 frames per second. Similar to the Osmo Pocket is recorded at a speed of 100 Mbit / s. Thanks to its special design, the objective is to record the distortion-free lens and to largely eliminate warping effects. Thanks to a special coating, fingerprints should not be a problem.

Thanks to the new electronic image stabilization called RockSteady stable recordings even in 4K with 60 fps to be possible, which is definitely an announcement to the competition. After all, HDR recordings are possible up to 4K and 30 fps. Other features of the camera are:

A special feature that definitely does not exist in the competition, are two displays in front and behind. Thus, the action cam is well prepared for selfie shots.

Not cheap, but competitive

In terms of price, the DJI Osmo Action with an RRP of 379 euros is not cheap but still quite close to the current GoPro top models. Presumably, the quality of the recordings and image stabilization will determine whether the Chinese Dohnen experts can keep up with the competition on the ground. From May 22, the action cam should be available from specialist dealers.