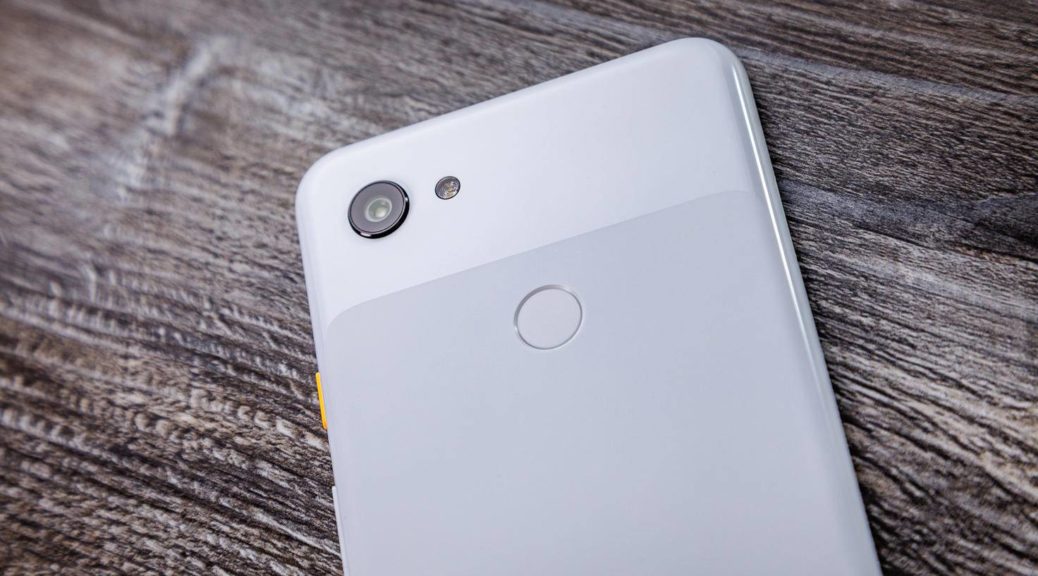 With the Pixel 3a and the Pixel 3 XL brings Google Lite versions of its current flagship smartphones in the trade. However, this time they are middle class. We had the Pixel 3a XL in the test and reveal how the stripped-down flagship variant beats there.

The Pixel 3 and Pixel 3 XL were able to convince with good software and cameras, but not stand out in the premium smartphone class. The differences to the predecessor models were too low. Users let Google feel this especially through the sales figures . But that did not stop the search engine giant from sitting down on the drawing board again and developing a lite version of its flagship flagship. And here the Pixel 3a XL seems to have found its place in the sun.

The design has changed little compared to the original. The back is similar to the Pixel 3 XL visually quite clear. However, a glass surface was omitted. The back panel is completely plastic this time – bad is not that, quite the contrary. If you had to be careful with the Pixel 3 XL that the noble back of the smartphone does not scratch, you do not have to worry about the Pixel 3a. As many users anyway equip their smartphone with a protective cover, backs made of glass never opened up to me so completely, and I can live well with the plastic panel.

Google waives the Pixel 3a XL on a glazed back.

The frame has not changed too much. Our white test copy again has a strikingly orange power button, which is located above the volume buttons as usual. On the bottom there are two speakers and a USB-C port. On the top of the frame, however, there is an innovation to announce: Here is this time a jack, which is missing in the Pixel 3 XL.

In contrast to the original, the Pixel 3a XL comes again with a jack.

And even with the front there is a change compared to the original. While the original still comes with a Notch, in which a dual selfie camera is housed, Google decided this time for a classic design without Notch. Thus, the Pixel 3a XL with a wide "forehead" and "chin" even a little reminiscent of the pixel 3. In addition, Google saved this time one of the two front cameras, but later more. The classic design is after the trend of Notch, although a little getting used to, but I have to say that the look is a successful change.

The size and weight of the Pixel 3a XL are almost identical to the original. However, the screen size is about 0.3 inches smaller due to the classic design, but this should hardly disturb.

Conclusion : Google relies on the proven design, but makes minimal changes. The missing glass back and the renunciation of a notch are a matter of taste, but I like the changes well.

Display: OLED for the middle class

As expected, Google also saved a bit on the screen of its low-budget version of the Pixel 3 XL. The good news, however, is that these savings are hardly noticeable in everyday life. The Pixel 3a XL still has a high-quality OLED display.

As already mentioned, the screen diagonal has shrunk a bit compared to the original. But that's not so bad, because when watching videos, the area next to the Notch anyway not used. However, the pixel density has deteriorated a little compared to the Pixel 3 XL.

Had the original still a super sharp screen with 523 dpi, the new edition comes only to 402 dpi with a screen resolution of 2160 x 1080 pixels. However, this is of little importance in everyday use, and playing and watching videos is a lot of fun on the Pixel 3a XL.

The OLED display is not quite as sharp as the original Pixel 3 XL, but that is hardly noticeable.

I especially like that different color modes can be set for the display. The set standard called "Adaptive", which promises rich colors, I personally like best. For users who prefer natural colors, Natural and Enhanced modes are ideal.

However, there is a slightly greater disadvantage: The display of the Pixel 3 XL does not support HDR. Films and images taken with HDR can not be displayed in their entirety on the screen.

Conclusion : The screen must be compared to the Pixel 3 XL a few cuts to be accepted, but can get over. The OLED display is one of the best I have seen in the smartphone middle class. Only the absence of HDR is a small downside.

Technology: No high performance, but it's enough for everyday life

Technically, the stripped-down Pixel-3-XL variant has had quite a feather. This is most noticeable in the processor. While the predecessor of the fast Snapdragon 845 is used, the Pixel 3a XL is a Snapdragon 670 on board, which is two generations older. The processor receives support of 4 GB of RAM.

Our test copy still has 64 GB of memory that can not be expanded. Although this is not top-of-the-range equipment by today's standards, one should not forget that this is a mid-range smartphone. Weaknesses in everyday use have not revealed to me in this hardware combination: The Pixel 3a XL run several apps easily in the background and it can smoothly switch between them back and forth.

Videos in full HD resolution could be played smoothly and even in demanding games, such as "PUBG Mobile", the hardware does not work up a sweat. For everyday use, the Pixel 3a XL is well suited in any case.

Unfortunately, only a USB 2.0 C port is installed.

Furthermore, Bluetooth 5.0 and also NFC are supported. Unfortunately, only the 2.0 version is used for the USB-C port, the faster 3.1 version would have been particularly useful for transferring images to the PC.

The battery has even a small surprise to announce: This is with a capacity of 3,700 mAh namely nearly ten percent larger than its predecessor. During the everyday use – consisting of surfing in Wi-Fi, activated GPS, Bluetooth and always-on display, occasional videos and a few rounds "PUBG Mobile" – I have come to about 24 hours runtime, which is a decent value.

I find the quick charge function of the included 18W power supply especially practical. In the test, the battery of the Pixel 3a XL could be charged in 90 minutes from 0 to 100 percent. Users who use their smartphone intensively throughout the day should benefit most.

Conclusion : On the paper, the Pixel 3a XL performance has diminished a bit, but in everyday life that is not noticeable. The smartphone runs around and has a good runtime.

The big showpiece of the Pixel 3a XL remains, like the original, the camera. On the back even exactly the same camera as in the flagship is used. This is a Sony 12.2-megapixel sensor with optical and digital image stabilization and an f / 1.8 aperture.

The proven camera from the flagship has been preserved the Pixel 3a XL.

But something has changed on the front. Instead of two sensors, the Pixel 3a XL front only has an 8-MP lens with f / 2.0 aperture and fixed focus. Thus, the Lite version of the flagship also loses the function for wide-angle selfies.

Qualitatively, the pictures are expected to be at the same high level as the original Pixel 3 XL, which is hardly surprising given the same technique. But I could well imagine that Google has made some fine tuning in the image quality. I can not prove that with the naked eye and without a detailed comparison of the two devices.

With HDR + you get good photos right away.

The colors in the photos are true to life.

The single cam is also well-balanced with less than optimal lighting conditions.

Thanks to HDR + even small details come into their own.

It is particularly convenient that the variant without depth of field is also saved in portrait shots: here with bokeh effect.

And here without the depth of field effect.

This is what a photo with the night vision mode looks like in almost absolute darkness.

And here the same picture without the night vision mode.

However, there are still some features added to the camera features known from the Pixel 3 XL. Here is a list of all features including their updates and innovations:

The camera features of Google Pixel 3a XL

Conclusion : The Pixel 3a XL is the original in the camera in every way. Rather, on the contrary: To the already good software features are still some more innovations added.

With the jack connection, the Pixel 3a XL should already have a piece of cake with audiophile users, but Google also convinces with the loudspeakers. What I particularly like is that the earpiece, which is mostly used only for telephoning, is also used in media playback. So you can enjoy music and movies in stereo. The speakers are also powerful and produce a rich and clear sound.

The earpiece is also used as a speaker in media playback. That makes for real stereo sound.

Conclusion : In combination with the screen, the good sound of the Pixel 3a XL ensures a great movie and music enjoyment.

Software: The genius is in the detail

As my colleague Patrick has already noted at the Pixel 3, Google seems to build the hardware around the software for smartphones. And that's not different with the Pixel 3a XL. Rarely have I had a system in my hands that works and harmonizes so well. The smartphone simply runs around and is thought through from the beginning to the end.

For example, the Always on Display is extremely handy if I take my smartphone out of my pocket and check the time or notifications received – no button press, no unlock. In the bag of course, the screen turns off automatically.

Or the feature "Now Playing": How many times have I heard a cool song and wondered who the title is? But by the time I got the smartphone out and started apps like Shazam or Soundhound, the song was usually over again. The Pixel 3a XL shows how it works. Rausholen and with activated "Now Playing" function the title is shown me directly on the Always on display – simply super comfortable.

The same applies to opening the camera: you want to quickly take a picture? Simply press the power button twice and the camera is ready for use. It really is not faster anymore.

Quick take a selfie? Simply press twice on the power button and off you go.

I could count countless other features of the Pixel 3a XL, which facilitate the handling of the smartphone, but that would actually go beyond the scope. And while we're at Frame, the function of opening the Google Assistant by pushing the bezel (Active Edge), I think it's awesome.

Conclusion : The Pixel 3a XL runs so round that it is actually already a bike. The many useful features are comfortable, practical and really fun.

Conclusion: Why not the same?

The Pixel 3 XL has finally arrived in the Lite version where it belongs: in the middle class. With its flagship Google could not really take root in the premium class, which may have been due to the few improvements over the Pixel 2.

With the Pixel 3a XL, on the other hand, Google is doing everything right this time: good hardware at a reasonable price. Sure, the processor is a bit weaker, the design is not quite so classy and the OLED screen is not quite as sharp (and the missing HDR hurts a bit), but with what mid-range smartphone do you get such a good camera and otherwise such a well-coordinated system? I can not think of many devices.

If you are looking for a good mid-range smartphone, then nothing is wrong with the Pixel 3a XL.