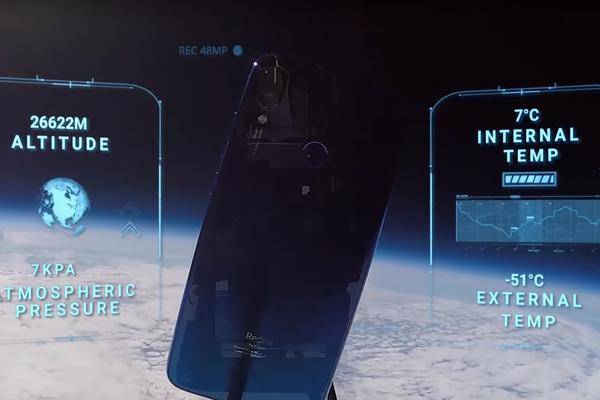 Xiaomi comes up with some ideas for the application of the Redmi Note 7. After the smartphone had to serve as nutcracker, it is sent this time in space.

In order to make your own mobile phone stand out from the masses of competitors these days, you have to come up with some ideas – apparently the Chinese manufacturer Xiaomi thought as well. The company was now namely his new device Redmi Note 7 on a balloon rise to the height of 35 kilometers. The smartphone was filmed all the time by another device, as can be seen in the matching YouTube video. Despite an outside temperature of up to -58 degrees Celsius, the temperature in the cell phone remained mostly constant between 4 and 9 degrees. There was even enough time for a few snapshots of the Earth's atmosphere.

In the stratosphere, the balloon finally burst and the Xiaomi Redmi Note 7 fell back on a parachute to the ground. If you want to believe the video of the Chinese manufacturer, the smartphone was not damaged in this fall also. The switching on again of the device apparently went smoothly.

The Xiaomi Redmi Note 7 is available in Germany from about 180 euros. For this price, the buyer gets a solid mid-range device with a surprisingly strong 48-megapixel camera … which is apparently also quite robust.