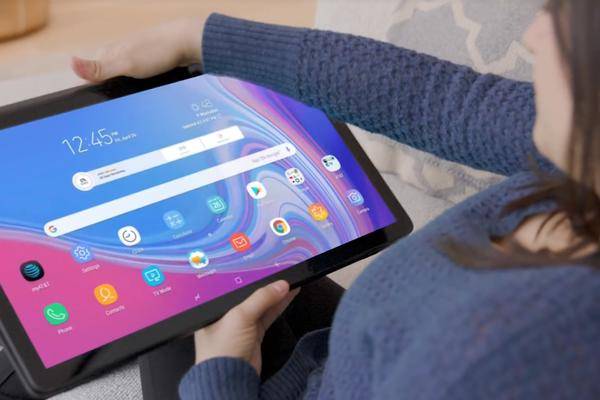 Actually, tablets are characterized by a light transport – the Galaxy View 2 is definitely different. Samsung's new giant tablet is more like a TV than a classic tablet.

Details and features of the Samsung Galaxy View 2 were revealed by US mobile operator AT & T in a YouTube video , writes The Verge . The tablet brings it to a screen diagonal of a whopping 17.3 inches and dissolves in Full HD resolution. Inside, an Exynos 7884 with a clock rate of 1.6 GHz performs its service, which is supported by 3 GB of memory. The internal memory holds 64 GB, on the front is a 5-megapixel camera attached. There is no camera on the back – probably due to the fact that it would be a very cumbersome task anyway.

Galaxy View 2: Release in the US on April 26th

Due to its lush dimensions, the Galaxy View 2 also has ample space for a battery that is properly sized with 12,000 mAh capacity. The fact that the giant tablet focuses on pure entertainment is underlined by the four loudspeakers with support for Dolby Atmos. The device transmits in the LTE network, but is not 5G-capable. The operating system is Android 8.1 preinstalled.

First, there is the Galaxy View 2 in the US to buy only with a contract of the provider AT & T, for the $ 37 over a period of 20 months are due – a total of $ 740. The release will take place on April 26th. Whether and when it will give the device in Germany, is unknown. The first generation of the Galaxy View was released in 2015 and was even a little larger at 18.4 inches.