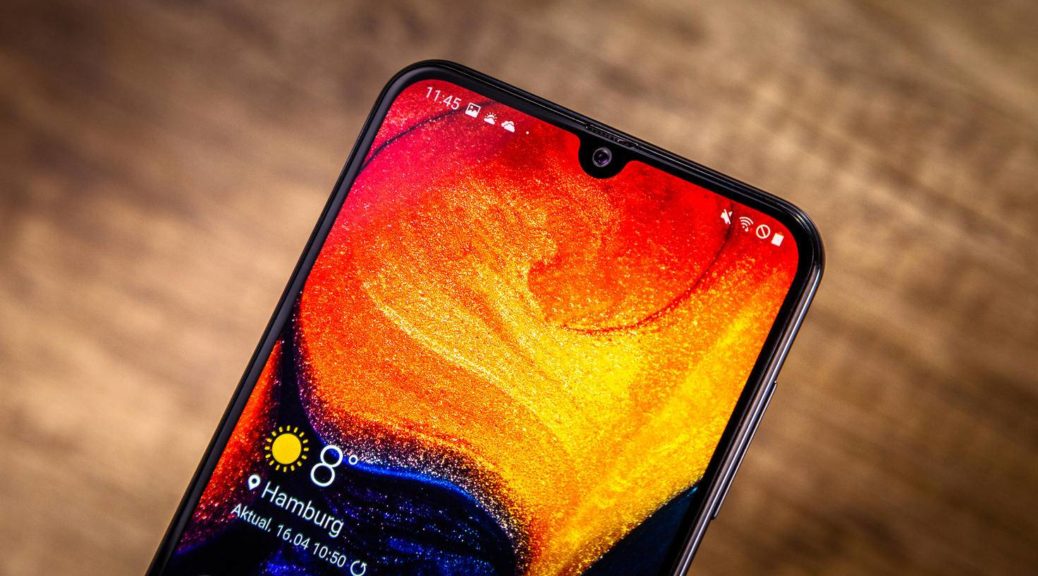 With the Galaxy A50, Samsung has launched a new mid-range smartphone with a large AMOLED display on the market. The rainbow-colored back and the triple camera draw the eye to the phone. In the test, we checked whether it is more appearance than being – or vice versa.

Design: rainbow and drops of water

The Galaxy A50 immediately shines the buyer with the bright colors of its 6.4-inch super AMOLED display. The selfie camera comes in a small notch in the display in the top center, what Samsung calls "Infinity-U". More common is the name "water drop Notch" and you know them at the latest from the OnePlus 6T . Under the display are a few millimeters margin on the "chin" to make out, but otherwise the display comes out almost without edge.

The waterdrop notch called "Infinity-U" is unobtrusive in everyday life.

On the back, a triple camera is mounted vertically on the top left, including the LED flash. Otherwise, there are two other abnormalities: The reflective back breaks the light in rainbow colors – so the black back of our model, depending on the light, a green, blue or take a very different color. It's an interesting effect we have not seen on a smartphone like this before.

Depending on the incidence of light reflects the back in other colors.

The second conspicuousness: The back and frame of the smartphone are made of plastic. This is a significant step backwards compared to the Galaxy A5 from 2017, which combined a metal frame with a glass back and was built legendary stable. Apart from the choice of materials, the Galaxy A50 is also relatively solid.

Conclusion Display : The large display with the narrow frame and the rainbow-colored back know how to please. But the production of plastic is no longer up to date in the middle class.

The Galaxy A50's AMOLED display measures a whopping 6.4 inches and resolves to 2,340 x 1,080 pixels. The screen will be bright enough for use in the sun. Unfortunately, it does not support HDR, which can be better for other midrange devices like the Nokia 8.1 . Subjectively, the A50 display still makes a powerful impression, and most users will certainly be fully satisfied with it. The inconspicuous waterdrop notch does not interfere with use.

Conclusion Display : The large AMOLED display is a stunner, only the renunciation of HDR support will be regretted by some.

The technology inside can enjoy a 128 GB UFS 2.1 memory. So Samsung has installed a fast internal memory, which significantly reduces the load times, and no lame eMMC memory. Also great is the 4,000 mAh battery, which allows an excellent runtime of just over 1.5 days. Bluetooth 5.0, NFC, ANT + and AC-WLAN are now expected in the mid-range, as of course the USB-C 2.0 port.

The Galaxy A50 offers a decent technology inside – with some highlights.

Even a jack for headphones is still offered and dual SIM has now become the smartphone standard. The processor called the Samsung Exynos 7 Octa 9610, however, is about the same level as the Snapdragon 660 in the Redmi Note 7 and does not match the midrange chip Snapdragon 710, which is built into the Nokia 8.1 . Also, the 4 GB of RAM would have liked to be 6 GB.

The graphics performance is still fine, so can "PUBG Mobile" gamble in high settings. The notoriously demanding "Sonic Forces" runs really smoothly only with low settings. Finally, there should be mentioned the optical fingerprint scanner under the display. This technology is quite uncertain, and the scanner is quite stubborn and often unlocks only on the second or third attempt. A conventional fingerprint scanner would have been better.

After unlocking with the annoying in-display fingerprint scanner, the Galaxy A50 can be used smoothly.

Conclusion Technique : The Galaxy A50 offers for the middle class a decent technique, with the fast UFS 2.1 memory and the very long battery life stand out positively. The fingerprint sensor under the display is annoying in everyday life, as it often does not work on the first try.

The triple camera on the back is composed of a 25-megapixel sensor, an 8-megapixel wide-angle lens and a 5-megapixel camera for depth of field. The photos with the main camera suffer from overexposure and they are sharpened a little too much, they are also oversaturated. The exaggerated artificial sharpness leads to slight loss of detail. In Pro mode, these problems can be reduced and the photos look more realistic. Despite these weaknesses, the overall picture quality of the current middle class is quite worthy.

Three cameras are still not standard in the middle class.

The camera app works smoothly – unlike the app of the Nokia 9 PureView.

Taking pictures is fun with the Galaxy A50.

The photos with the wide-angle camera are out of focus at the edges and are overall below the level of the pictures, which are taken with the 25 megapixel main camera. The 5 MP camera is responsible for the bokeh effect and if the cameras recognize the subject, this can also be seen. Unfortunately, the camera sometimes focused in the test the background instead of the subject.

The photos are slightly oversaturated and overexposed by default.

Due to the slight overshoot details are lost.

In daylight, good shots are possible.

The depth of field works relatively well, but not at the level of a 3D camera (see plant).

There is not much to see at night.

The wide-angle camera is a welcome addition.

The additional camera for the bokeh effect pays off.

Unfortunately, sometimes the background is focused instead of the subject.

The selfies are of good quality.

Night photos suffer from a very strong picture noise and thanks to the lack of night mode, little is captured by the subject. But we have also seen worse performances in the middle class. The Full HD videos reach a similar quality as the videos and unfortunately are not stabilized. Meanwhile, the selfie camera with a resolution of 23 megapixels snaps convincing, quite sharp portrait photos with realistic colors.

Conclusion Camera : The triple camera are appropriate for the middle class. A preference results from the number of sensors, so the user can also make wide-angle and Bokehaufnahmen.

At the jack port you can connect your headphones.

Samsung does not use a stereo speaker, which is not unusual for the middle class. The mono speaker on the bottom does a pretty good job and gets loud enough. Of course, he is far from approaching the trailblazer Galaxy S10 . The same applies to the audio quality via headphone jack: Loud and clear, but flagships like the LG V40 ThinQ are ahead of the game.

Assessments such as "solid" and "tidy" were frequently read in the test. But that's not bad, because for a mid-range smartphone convinced the Galaxy A50 quite. The big AMOLED display, the very long running time and the back reflecting in many colors are especially good. Meanwhile, in virtually every middle-class test, one has to point out a big competitor.

The Galaxy A50 is Samsung's first mid-range smartphone since then that I liked as much as the Galaxy A5 (2017).

The Xiaomi Pocophone F1 is available for the same price of around 330 euros (with 128 GB of memory) and offers much higher performance thanks to the Snapdragon 845. The dual camera is slightly better than the Samsung counterpart, but the Galaxy A50 has a wide-angle sensor on top. In the end, the big AMOLED display in particular speaks for the Samsung model and the Xiaomi with its smaller IPS display. Despite the strong competition one must congratulate Samsung, after the Galaxy A5 (2017) again a completely successful middle-class Smartphone on the legs to have put.