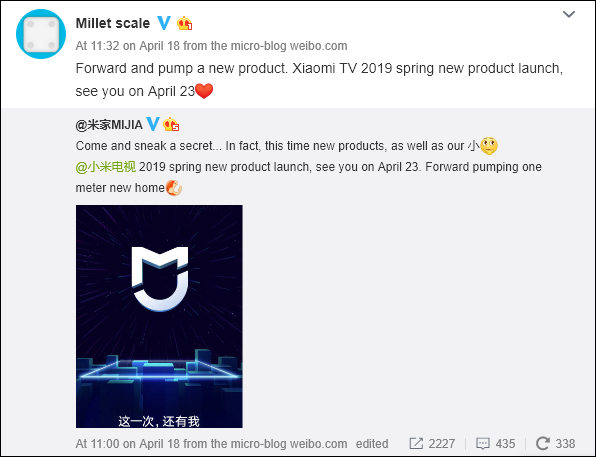 If we remember, this coming April 24 , Xiaomi has scheduled a new event where a TV will be presented which is expected to integrate a design never seen before . Now, the company itself has indicated that this new TV will not come alone, and it seems that during the same presentation we will see a new MiJia product .

Although not much is known about it, this April 24 , Xiaomi will present a new television that will surprise by its new ultra-thin design , a remote control system based on voice commands and a final detail that although we still do not know exactly in question, Xiaomi has indicated that his new TV will have a "double-sided" design .

This presentation is joined by a new advertising teaser where Xiaomi intends to also announce a new product under the MiJia sub- brand . Although at first glance this advertising teaser does not show much information, if we look at the following image that corresponds to the publication made on Weibo, we can see how it has been done through the profile of the scale MiJia Scale .

Publication made on Weibo.

This fact could indicate that this April 24, Xiaomi could launch its new generation of scales dedicated to health under the sub-brand Mijia , adding a new product of this type to its current two scales of this brand.

Still, there are no more details of what features could integrate this new product Mijia , or in addition, if only we will see this new scale or more products will be announced by Xiaomi with his new TV.